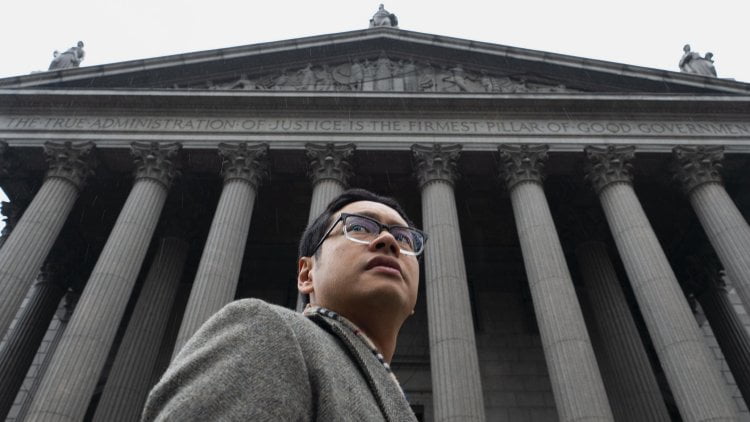 The American Civil Liberties Union (ACLU) is a protector of rights guaranteed by the Constitution.  Since the election of Donald J. Trump, the organization has gone into overdrive, filing over 100 lawsuits against his administration.  Directors Eli B. Despres, Josh Kriegman and Elyse Steinberg (editor, director and producer of "Weiner") knew what film they would make next a mere week after Trump’s inauguration when he signed his Muslim ban, one of four cases they portray in “The Fight.”

Told in a news magazine format, “The Fight” arrives at a precarious time in U.S. history.  With our democracy under constant siege and a news cycle that delivers fresh outrages multiple times a day, it is almost traumatic to be reminded of just how long and how often we have been battered with assaults upon justice and equal rights.  Yet overall, the documentary slants toward hope.

The filmmakers don’t overtly state it, but for some reason the ACLU has long been considered a liberal organization (which, when you think about it, says a lot about how conservatives view the bedrock document that our country was founded on.)  LGBT rights Deputy Chase Strangio does admit that there ‘are more tattoos and piercings here than at DOJ,’ but they dispel this argument pretty quickly, illustrating how the ACLU has taken on Freedom of Speech cases for some very unsavory groups.  The organization is still traumatized by their involvement in securing the permit for the 2017 Charlottesville “Unite the Right” rally to be held.

The focus here is on four lawyers specializing in certain areas and the cases they are fighting for.  First up is Lee Gelernt, the Immigrants’ Rights lawyer called into duty in the pressure cooker that was the chaos introduced by Trump’s Muslim ban.  Gelernt is the oldest subject and seems out of touch with the modern world, but with multiple crises hanging over his head, like being passed a note that someone is on a plane about to be deported in twenty minutes, he pulls out a win.

Gelernt’s opposite is Dale Ho, an attorney so young you might wonder if he shaves yet.  We watch him continually fluffing his opening as he practices for his first argument before the Supreme Court.  The Voting Rights lawyer is challenging the citizenship question being added to the U.S. Census.

The other two cases feature Brigitte Amiri, a deputy director at the ACLU’s Reproductive Freedom Project who argued the Jane Doe case for the immigrant teen being denied an abortion (and turned it into a class action suit), and Joshua Block, Strangio’s director who took on the transgender ban in the military.  The filmmakers build suspense with cases we already know the outcomes to while showing us the inner workings of the ACLU via their ‘moots,’ working sessions to run lawyers through questioning stress tests, and animations of the four Supreme Court cases utilizing real audio.

“The Fight” honors the ACLU as a determined organization made up of people who value justice more than lucrative careers.  But despite the triumphs illustrated here, the documentary is also a reminder that we cannot afford to let our guard down.

The American Civil Liberties Union, better known to all as the ACLU, was established as a non-profit organization in 1920 “to defend and preserve the individual rights and liberties guaranteed to every person in this country by the Constitution and the laws of the United States.” The organization now faces the unique challenges to the law from Trump and they gird themselves for “The Fight.”

Over the past one hundred years, the ACLU has brought thousands of cases to the courts to defend the freedoms of those whose rights have been violated. Their case load has included abortion rights, campaign funding, pro gun rights, child pornography, the death penalty, HIV/AIDS, LGBTQ rights, national security, prisoners’ rights…. The list goes on for quite a long while.

Directors Elyse Steinberg, Josh Kriegman and Eli Despres smartly do not try to give us a compendium of all the cases handled, over a century, by the ACLU – they do give a concise history lesson of the organization. They do not even attempt to cover all off the 173 suits brought against the Trump administration. Instead, they concentrate on four of the lawsuits brought during the Trump debacle: abortion, immigration, LGBTQ and voting.

We meet the players for each of the four cases as they prepare for there day in court – including the Supreme Court of the United States – and they run the gamut from super experienced litigator to a newly minted attorney. Every one, though, is thorough in their research and dedicated to their client – the United States Constitution.

Each case is given up close and personal attention, allowing us to see the impact the four cases have on the individual. A teenage girl is incarcerated at the border and is denied her right to a safe, legal abortion. A military career is threatened because of gender choice. A mother is ruthlessly separated from her young child. The threat to our right to duty to vote without impedance. You have to admit, these are all controversial issues and every one is of critical importance to our freedom.

The filmmakers move from one case to the next, building a tapestry of the American judicial system, allowing us, the uninitiated, to observe its machinations. They also reinforce the necessity for such an advocacy organization as the ACLU – whether you agree with the case or not.