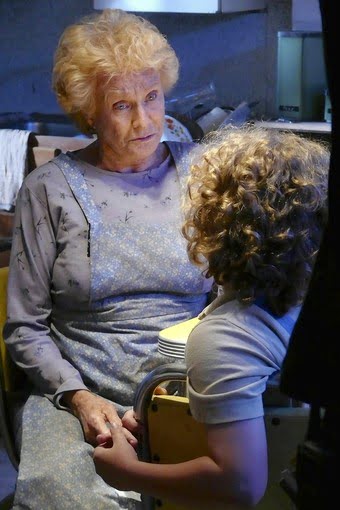 When his mother's behavior ignites his father's proclivity towards extreme violence, Steven (Joshua Ormond) is taken by his mom (Tara Reid, "American Pie") to stay with his paternal grandparents while she figures out what to do. Grandpa Hiney (Bev Appleton, "The New World") is happy to have the young boy's company around the farm, but Grandma Gladys (Cloris Leachman, "Bad Santa," TV's 'Raising Hope') warns him he'll never be found if he strays into "The Fields."

In 1973 producer/writer Harrison Smith was an 8 year-old who stayed at his grandparents' Pennsylvania farm abutting the corn stalks of the title. The scary, trying times he remembers were the basis for this film and it's a good one. Codirectors Tom Mattera & David Mazzoni ("The 4th Dimension") have the skills to build suspense and create haunting imagery when they don't stray too far afield and the film strongly evokes a sense of time and place. Young Joshua Ormond is fine providing our way into the story, but Cloris Leachman and Bev Appleton make for an unforgettable pair as the beleaguered grandparents. We're first presented with nature's foreboding beauty as the camera pans amber cornfields at dusk, then descends to crunch through the constricting rows. In a small rural home, Steven sees his father Barry (producer Faust Checho) hold a loaded rifle to his mother's head in their small kitchen. Before leaving, Bonnie explains to her own mother why she's depending on her husband's parents over her own (a history of sexual molestation suffered at the hands of her Sheriff father, Steven's Grandpa Ray (Tom McCarthy)). Despite a truly awful wig (which has its own closing credit!) providing the long tresses of the time, Reid is viable for her short stint, especially in a very honest conversation with her mother-in-law. In the movie's first few scenes, the filmmakers forebode with talk of Charlie Manson and the troubled souls of those returning from Vietnam. The era's racial strife is noted via the strangeness of Steve's Aunt Tootie (Karen Ludwig, "Manhattan") having a black boyfriend, Charlie (Brian Anthony Wilson, "Limitless"), a sensible father figure for the boy. Also established quickly is Gladys's unique sense of humor - profane and the kind of humorously dark that kids lap up. When she warns Boo-Boo (Steven) about their fields it's 'We won't find you and if we do you'll be all dead and smelly and bloated...' But when Steven's staging an epic battle with his plastic dinosaurs, he starts throwing sticks into the fields - and one's lobbed back. He can't help himself and wanders in, quickly consumed until a clearing reveals something odd looking - a young dead woman. Mami and Papi are relieved to find him (the boy who's told he will be lost is found three times), but dismiss his talk of a body. Things escalate on trips into town with Papi. In the milk farm's cow shed, farmhand Eugene (Louis Morabito, "The 4th Dimension") could stand in for Manson and a trio of hippie girls led by a threatening male (Mattera) are disturbingly friendly, strengthening the allusion. In fact, no higher compliment could be paid "The Fields" than its constant recollection of the Spanish masterpiece "Spirit of the Beehive," in which a radical figure is transported into a mythic monster through the eyes of a child. But this film is flawed by an inability to self-edit. There are fantastical elements within Steven's trips into the fields when he comes across an abandoned amusement park which suffer from a lack of spatial establishment and tonal notes. When Gladys agrees to visit her third sister, Aunt Grace (Suzanne Inman, "The 4th Dimension"), the woman's mental disablement and squalid living conditions are both true to the rural economics and the horrific imprint they would make on the mind of a child, but the filmmakers can't stop and devise a Texas Chainsaw brood in the basement that threaten to take their film off the rails. And cousin Mary's (Jane Tarica) grotesque facial deformity make up is as distracting as Reid's wig. Thankfully, everything is pulled back into place with a riveting build to a home invasion climax that really is pulse pounding. Original music by John Avarese ("The 4th Dimension," "My Dog Tulip") is used boldly throughout, punching into scenes in ways that both call attention to it and yet recall "The Shining." "The Fields" may have a few flaws, but it's effective filmmaking in a genre that's usually treated without respect and Leachman and Appleton's portrayal of a long-married couple is American Gothic with humor and heart.

It is 1973 and young Steven (Joshua Ormand) is obsessed with the crimes and incarceration of Charles Manson and his “family.” When he witnesses an act of potentially deadly violence between his mother and father, he is sent to his paternal grandparents’ farm for his own safety. But, an ominous cornfield next door may be inhabited by unseen forces that will impact the boy and his family in “The Fields.” The directing team of Tom Mattera and David Mazzoni make their foray into the realm of horror with their spooky sophomore effort. Steven is in over his head when he wanders into the cornfield and finds the dead body of a young woman. His grandparents, Gladys (Cloris Leachman) and Hiney (Bev Appleton), are earthy old codgers and do not believe his story about the murdered girl. Instead, they forbid Steven to enter the fields again. This, of course, is tantamount to a dare to the boy and you know he is going investigate the scary cornfield. As the story unfolds, we meet some distinctly Manson-esque characters, including Eugene (Louis Morabito), a scruffy worker at a local dairy farm, and some hippies living out of a VW microbus in an abandoned amusement park. Soon, shadowy figures begin to appear around the farm but the local sheriff will do nothing about it. The tension ramps up despite the lack of traditional horror film violence and mayhem and the filmmaking team craft an eerie film that takes no jump-out-of-the-dark cheap shots. The cast is solid across the board with young Joshua Ormand giving a convincing performance as a boy who does not scare easily and has a penchant for going places he absolutely should not. The boy’s mom and dad, Bonnie and Barry, are well-played by Tara Reid and Faust Checho who give real depth to their troubled marriage. The standout performances of “The Fields,” though, go to Cloris Leachman and Bev Appleton. These two delightful curmudgeons give real credence as an old married couple who, especially Gladys, pepper their dialog with some really foul mouthed cursing, providing much of the film’s comic relief. This low-budget thriller looks more expensive than it is with its imaginative use of set, like the spooky amusement park and, outstandingly, the titular cornfields. Camera is fast and fluid as it follows a frantic Steven as he runs away from his real or imagined pursuers through the titular fields. The original score, by John Avarese, ramps up the film’s tension even when nothing sinister happens. First time feature scribe Harrison Smith shows a great deal of imagination in his well-pace horror thriller that does not rely on a body count to scare you.