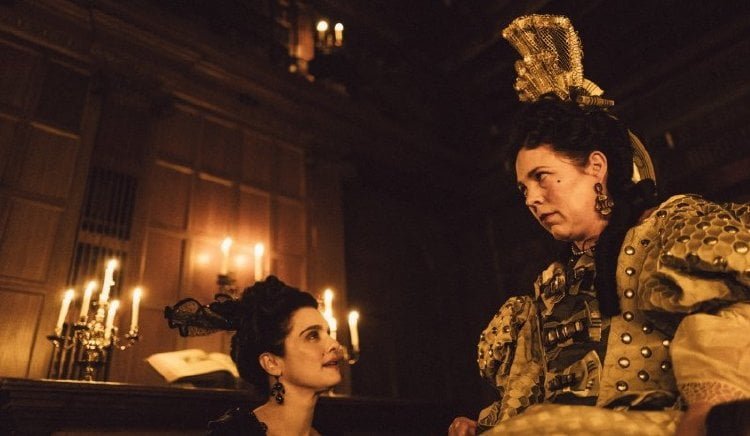 At the turn of the 18th century, Queen Anne (Olivia Coleman) was the ruling monarch of Great Britain. But her frail health keeps her from her queenly duties and affairs of state and her close friend and confidant, Lady Sarah (Rachel Weisz), became the power behind the throne. Enter Abigail (Emma Stone), Sarah’s penniless cousin, whose kindness to the queen threatens Sarah’s powerful influence in “The Favourite.”

At the onset of the 18th century England was at war with France with Queen Anne (Olivia Colman), a woman of poor health and education, at its helm. Her closest friend, Lady Sarah Churchill (Rachel Weisz), was essentially running the country, favoring the Whigs led by her husband Lord Marlborough (Mark Gatiss) when Anne herself was partial to the Tories. England's power structure would be upended by Abigail Hill (Emma Stone), a bankrupt aristocratic cousin of Sarah's who came to the Royal Palace as a servant, quickly learning the ways of the court, betraying her relative by joining forces with Tory opposition leader Robert Harley (Nicholas Hoult) and playing upon Anne's lonely insecurities as "The Favourite." Greek director Yorgos Lanthimos ("The Lobster") adds a new twist to his absurdist societal observations with his latest - historical truth. In reaching back to the 1700s, Lanthimos, working from a script by Deborah Davis and Tony McNamara, proves that the more things change, the more they stay the same, today's relevance to his tale of palace intrigue where everyone is pushing his or her own agenda in a partisan environment with an easily manipulated queen readily apparent. But one doesn't have to look for parallels in today's headlines to enjoy this film, which Lanthimos has made both wickedly amusing and tragically sobering. The Queen we're introduced to is so dependent on 'Mrs. Freeman' (her childhood pet name for Sarah, who calls her 'Mrs. Morley'), she's unaware her war with France is still ongoing, instead consumed with the discomfort of her frequent bouts with gout. Called from the scullery to apply raw beefsteaks on the Queen's legs, Abigail notes her misery, sneaking into her bedchamber in the wee hours to apply an herbal poultice of her own making. This better remedy is rewarded, Abigail promoted from the scullery to attending to the Queen's bedchamber. She makes an immediate impression with her appreciation of 17 rabbits kept in the Queen's room, which Sarah views with disgust. Abigail discerns the Queen's loneliness, learning that these soft creatures represent the 17 children the woman's lost, mostly to miscarriage, and here is the main difference between the two women - while Abigail plays upon the Queen's emotional needs, Sarah chooses blunt truths as proof of trustworthiness. The Queen, meanwhile, is not quite as naive as most believe, and when Abigail acts upon her mentor's darkest secret, the Queen gains an upper hand in the manipulation game. Lanthimos's palace is not just a place of political intrigue, where Sarah sends her own husband to the front while Harley plays Cupid to gain Abigail's allegiance (Colonel Samuel Masham's (Joe Alwyn) lust for the young woman is expertly played not only by Harley but Abigail herself), but for all kinds of recreation. Sarah teaches Abigail to shoot pigeons on the palace grounds, but inside we witness surreally staged dances, duck races and a bewigged aristocrat being pelted with fruit in front of white screens much to his own, giggling delight. The Queen, however, does not participate, instead keeping to her chambers or carried about in a sedan chair (in one pitiful scene, she attempts to pilot herself, getting lost in her own palace). All three actresses are cast to their strengths, Colman delivering the slipperiest, most complex performance, her Queen gaining confidence in her own abilities as others are distracted by their own power struggles. Weisz is perfect as the alluring and powerful Churchill. She's the cool to Stone's warmth, the younger actress's most prominent feature, those huge eyes, used as an expression of innocence. But Stone's character undergoes the most startling change, power corrupting so completely, Abigail ultimately seems devoid of the compassion which once distinguished her. The production is dazzling, with Hatfield House standing in for Anne's palace. Robbie Ryan's stunning, candlelit 35mm photography features rich blacks, browns and golds, wide angle lenses taking everything in. Hair, makeup and costume is elaborate, Hoult, of all people, the most extravagantly turned out with his high wigs, rouged cheeks and decorative Mouches. "The Favourite" highlights one of England's least well known queens in a fun political period romp, its underlying truths about human motivation distressingly relevant. Grade:

I knew very little about Queen Anne’s reign and went into “The Favourite” with an open and curious mind. Considering the caliber of this mainly femme cast, I expected to see three strong performances and I was not disappointed. But, it is the political and personal machinations of royalty and government that most intrigued me. Anne is the product of Europe’s ongoing royal power plays. Politically potent marriages are arranged for one thing – making heirs for the throne. The queen dutifully produces babies, some 17 children, but none lived beyond an early age. The toll of her labors (no pun intended) is debilitating, and makes the way open for the ambitious Lady Sarah. Abigail inauspiciously arrives at the queen’s residence with hat in hand, begging cousin Sarah for a job, any job. Her kindness and gentle manner soon draw’s Anne’s attention and the young woman’s presence becomes essential for the queen. This, and an ongoing war with France, sets the stage for an emotional triangle during a time wrought with political intrigue. Director Yorgos Lanthimos, in 2015, made the oddball dystopian futuristic tale, “The Lobster,” so I wondered about the transition to an opulent period drama about personal and political intrigue. He makes that transition seamlessly and. with three stellar performance and first rate production (plus the only significant male character, nicely played by Nicholas Hoult), made me want to know more about what amounts to the early feminist movement.