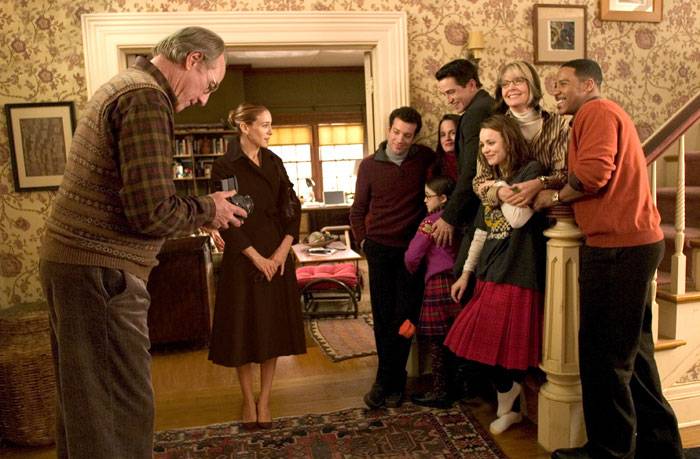 Sybil Stone (Diane Keaton, "Something's Gotta Give") harbors a secret as she awaits her family's gathering for the Christmas holidays in the old New England homestead so she's glad that her children are focused on the imminent arrival of their brother's uptight New Yorker girlfriend whom only Amy (Rachel McAdams, "Red Eye") has met and instantly despised. Sybil keeps a more open mind, but when Meredith Morton's (Sarah Jessica Parker, HBO's "Sex and the City") attempts to blend into the family are like oil's with water, Sybil is terrified that Everett (Dermot Mulroney, "The Wedding Date") is going to ask her for "The Family Stone."

Writer/director Thomas Bezucha's ("Big Eden") leap into bigger budget filmmaking is blessed with some terrific performances that help, but cannot hide, some severe problems. Still, "The Family Stone" is a far better holiday alternative than the usual Yuletide themed films ("Christmas with the Kranks," various Tim Allen efforts). Sybil sits wistfully in front of her Christmas tree for a few quiet moments before her extensive family begins their boisterous holiday reunion. Heavily pregnant Susannah (Elizabeth Reaser, "Stay") and her daughter Elizabeth (Savannah Stehlin) have already nested there when brother Thad (Tyrone Giordano, "A Lot Like Love"), who is deaf, arrives with his black lover Patrick (Brian White, "Mr 3000"). Liberal, progressive mom Sybil warns arriving Ben (Luke Wilson, "Anchorman: The Legend of Ron Burgundy") that Christmas isn't going to be clothing optional this year given their company, as Amy thrills to relay to one and all how awful their new guest is. After Everett's rental pulls up, Meredith, awkward in suit and heels, is escorted from the car by dad Kelly (Craig T. Nelson, "The Devil's Advocate," "The Skulls") painfully aware of the clan grouped watching from the window. Meredith is obviously a high strung bundle of insecurity. While laid back Ben tries to make her feel at home, Meredith does herself no favors by insisting she and Everett have separate rooms, displacing Amy, then nervously boring everyone with the dry, rambling tale of how she and Everett met. Then Amy sets her up to look like a racist during a game of charades and Meredith flies off the handle, insisting she move to the local inn where she'll have her sister, Julie (Claire Danes, "Shopgirl"), come to join her. On Christmas Eve, Julie, whose assimilation into the Stone family is so smooth it's barely noticeable, watches in horror as her sister digs herself a hole with an ill considered remark about parents of gay children. Everett doesn't follow Meredith when she flees the dinner table in tears, but another Stone brother does. In some ways, "The Family Stone" can be seen as the wintertime counterpart to the summery "Junebug." Both films feature families tied to a specific small town American region who are meeting a son's sophisticated urban partner for the first time. But where "Junebug's" George was a blank for a reason, someone the other characters projected onto and reflected away from, "Stone's" Everett, is just a blank. Dermot Mulroney's second appearance this year as a new fiance has even less personality than his first and that sucking sound you hear is the hole he leaves in this film's heart. An even bigger problem is the character of Julie, and Danes cannot fix what Bezucha has left broken. The writer/director has failed to work out a believable reason for her appearance and the romantic entanglement she becomes wrapped up in is equally mishandled and has little chemistry. Bezucha also exiles Thad and Patrick from the family manse presumably just to populate the town inn with more than just the Morton sisters. Which is a shame, because most other aspects of "The Family Stone" work. Diane Keaton is terrific as the family matriarch, an L.L. Bean liberal whose heart only hardens when her cubs are threatened. Keaton really does seem to have the ability to keep a large household in check while maintaining a sense of humor. She also has a wonderfully needy lovemaking scene with Nelson. Equally good is Sarah Jessica Parker, who couldn't have chosen a more different New Yorker from Carrie Bradshaw for her first post-"Sex and the City" role. Parker makes Meredith one of those socially inept people one feels embarrassed for - the woman's a mess and it is a relief to see her eventually let her hair down (too bad Bezucha makes it literal, but that she must not once, but twice crawl back into her shell before she's comfortable out of it is one of his better pieces of character development). Rachel McAdams's rising star continues its ascent with her totally different mean girl turn. She's the family gossip, an irrepressible trouble churner, but she's able to take the lesson she's taught and thaws out nicely. Elizabeth Reaser is McAdams' supporting equivalent - having made an impression in her "Stay" debut, she's a confident and warm presence here. While the men don't shine as brightly, Nelson is well cast and Paul Schneider ("All the Real Girls") proves a nice addition as the local guy who still has a thing for Amy. Wilson's likable enough crossing his usual low key charm with a little of brother Owen's stoner schtick. Bezucha writes Meredith a way to begin to redeem herself that is touching without being sentimental and his final coda circles back to his beginning with just the proper mix of holiday warmth and melancholia. With a few more polishes, "The Family Stone" may have almost sparkled, but it's been left with too many flaws to quite make the grade.