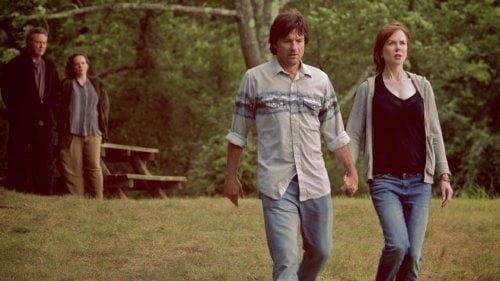 Baxter (Jason Bateman) and Annie (Nicole Kidman) are heading to the home of their parents, Caleb (Christopher Walken) and Camille (Maryann Plunkett) Fang, where they spent a turbulent childhood as part of Caleb’s performance art. When their parents go suddenly missing, the siblings have to figure out if their parents are really dead or they doing just another elaborate prank that Caleb and Camille are famous for in “The Family Fang.”

Throughout their childhood, Annie (Nicole Kidman, Taylor Rose (18), Mackenzie Brooke Smith (9)) and Baxter (Jason Bateman, Kyle Donnery, Jack McCarthy) were part of their parents' public performance provocations, playing at robbing a bank, humiliating children and stunning mall photographers. When the now adult siblings, both failing artists, are told that their parents are missing in a possible homicide, Annie is sure it's their latest stunt. Solving it, she believes, will reunite "The Family Fang." Jason Bateman's sophomore film, a step up from his debut ("Bad Words"), shows a predilection for sentimentality masked in eccentricity. Adapted by David Lindsay-Abaire (2015's "Poltergeist") from Kevin Wilson's novel, the film works best showcasing dad Caleb Fang's (Christopher Walken, "Non-Stop's" Jason Butler Harner in flashback) questionable artistic pursuits, but goes limp with Annie's present day quest. Walken gives a fierce performance, his ego exalted by his own pompous assessment of his life's work, his initially unwanted children regarded as little more than tools of his trade. The film opens in flashback, young Baxter holding up a bank teller for lollipops. What at first seems like a cute ploy turns deadly serious when a gun is produced, escalating when an errant shot hits a bystander. Onlookers recoil in shock as Baxter tastes his victim's (mom) blood, then she sits up laughing. The family troops out, dad advising his stunned audience that life is short... Although most of these exploits are captured on video, it is never made clear exactly how mom and dad earn a living from them even though they have achieved a minor celebrity. When we catch up with the adult 'Child A' and 'Child B,' as dad referred to them, both are struggling. Annie is an alcoholic actress whose career is slipping who has just been sideswiped on set with a newly written nude scene. Baxter is an addicted writer whose book is two years overdue. When he takes a quick magazine assignment on potato shooters, he ends up in hospital, his parents called to pick him up against his will. He calls Annie, begging her to save him and an inadvertent family reunion takes place back at the old upper New York state homestead. But the mother who appeared fully committed to the Fang's artistic output in the old days (Kathryn Hahn, "Bad Words"), now acts (Maryann Plunkett, "Blue Valentine") more like an anxious hostage. Caleb sees his adult children's return as the perfect opportunity to take up where they left off, his and Camille's output without them far less successful (unbeknownst to Caleb, Camille's taken up painting, an artistic endeavor he'd view as unfaithful sacrilege, 'art,' in his opinion, only occurring 'in the now'). His latest exploit doesn't go according to plan, however, and suddenly the senior Fangs are missing, their bloodied car found by the side of a road plagued by such disappearances. This leaves the siblings to reconnect, Annie pointing out where 'it all went wrong,' a high school play that had dad in cahoots with their drama teacher, Miss Delano (Linda Emond, "Julie & Julia"), who lost her job over the incident. Bateman and Baxter convince as siblings, Bateman's concerned regard for his sister's pipe dream palpable. He begins to heal when he's urged to speak to a local writing class, voicing his discovery that writing was a way to control his world. In a last ditch attempt to out their parents, Annie arranges for a yard sale of all their belongings when a CD of 'The Vengeful Twins' stuns with an echo from their past, providing a clue. "The Family Fang" reverberates with themes from many prior films, in some ways playing out as if Fincher's "The Game" were perpetrated on an unsuspecting public. The dysfunctional family has been a staple for a long time, but "Fang" adds a discussion on art that gives it personality. An early dialogue between two art critics on either side of Caleb's relevance subtly wends its way back when we see Fang's giddy schoolboy reaction to his first foray inspired by his mentor. Bateman stages these episodes as fast paced capers. Carter Burwell forsakes his signature French horns for tinkling notes in a score that envelops the family in a deranged, quirky Valentine. Grade:

This is Justin Bateman’s second feature film as director and star and, with screenwriter David Lindsay-Abaire, adapts the 2011 novel by Kevin Wilson. Adult Baxter and Annie are damaged goods following the years of their parents using them for their performance art pieces. Now, Annie is struggling as an actress and Baxter is having creative issues with his writing. Baxter takes a writing job about a new craze – the potato gun. He really gets into the game, even volunteering to be a human target. It does not go well and he ends up in the hospital. Annie gets a frantic call from Baxter begging her to come get him – before Caleb and Camille arrive. Once the Fang family reunion is finished, Caleb suddenly announces that he and Camille are going on a trip. This is where “The Family Fang” takes its darkest tone. The police call Annie and Baxter to report that their parents’ car was found abandoned with signs of a struggle and blood spattered at the scene. Baxter is horrified but Annie sees it as just another prank. What follows has the siblings trying to solve the mystery of the missing Fangs. Justin Bateman, with “The Family Fang” and his 2013 comedy “Bad Words,” shows a penchant for dark, edgy humor. The flashbacks to the various performance pieces over the years are priceless and set the stage for the present day mystery about the missing Fangs. The stars all do a fine job creating their complex characters but Christopher Walken stands out as the selfish, egotistical artist who used everyone around him, especially his family, in his quest for fame.