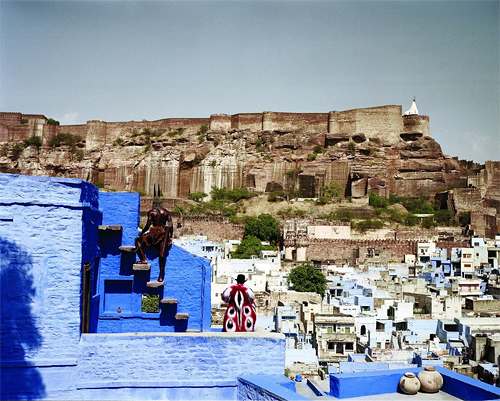 In a 1915 Los Angeles hospital, bedridden stuntman Roy Walker (Lee Pace, "Infamous," TV's "Pushing Daisies") befriends a little girl with a broken arm. As he weaves his tale of five mythical men into ever more outlandish situations, Alexandria (Catinca Untaru) visualizes from her own world view. But the stuntman who may never walk again and whose girlfriend has left him for another has an ulterior motive and is gaining the girl's trust to get her to bring him a fatal dose of morphine so that he may eradicate what his life has become after "The Fall."

Cowriter (with Dan Gilroy ("Two for the Money") and Nico Soultanakis ("The Cell")/director Tarsem Singh ("The Cell") spent sixteen years scouting locations in twenty-eight countries, then another four years creating his own visually spectacular, culturally peculiar version of "The Wizard of Oz." Equal part bedtime story and contemporary art museum installation, "The Fall" is unlike anything you've ever seen. This stunning production weds amazing, crisp pictures of the most outlandish places (Namibia, the Himalayas, Bali, the Taj Mahal, shot by Colin Watkinson) with beautifully bizarre costumes (Eiko Ishioka, "Bram Stoker's Dracula," "The Cell") and widely varying musical compositions (Krishna Levy, "Artemisia," "8 Women"). It's the type of film where a location is composed of a Buenos Aries movie palace lobby and temple ruin in Jaipur, where a shot can cut from Argentina to Vatican City within the same scene. The film has been criticized for a lack of story, of style over substance, and yet the story it tells is delightful, the juxtaposition of an adult using his wiles with a child as puppet and all the ways that child reinterprets his words and her environment into something else entirely (the film is actually based on the Bulgarian film "Yo Ho Ho"). An X-Ray technician protected by a metal hood becomes a black knight, a Native American Indian from the film Roy was shooting the Asian Indian (Jeetu Verma) Alexandria knows from the orange groves, the former slave Pygmy Otta Benga the basketball tall ice delivery man (Marcus Wesley). The scientist Darwin (Leo Bill, "The Living and the Dead," "Becoming Jane") is accompanied by Wallace, a man who arrived at the same conclusions but never received the same fame, of course made a companion monkey here. As the film progresses, reality and Roy and Alexandria's fantasy begin to mix, one story spilling over onto the other with Roy holding his own survival in his hand, masked as the Blue Bandit. Locations often have architectural qualities, like the concentric arches of a Balinese hillside or the diamond patterns made by steps down an ancient well. There is more than a little Matthew Barney evident within the combination of costume and its setting. A- The DVD: One would expect someone like Tarsem Singh to be a pretentious egotist, and yet his nonstop director's narrative track is a sheer delight. Singh tells us everything we need to know and more. His pride in his cast and crew is evident and he graciously notes his pleasure in the work of his collaborators. His comments are particularly of interest when discussing his first time actress, the Romanian Catinca Untaru, who he is so obviously enraptured with, despite the occasional frustration. When Catinca coughs in the middle of an important plot point, Singh works it into his movie, his elaborately outfitted princess, coughing, then squirming from the need to pee, just like his natural if undisciplined actress. He tells us of the commercial shoots that exposed him to much of his imagery, like his swimming elephant, and the favors he was able to call for his self-financed film. He points out each instance of screen trickery and we are amazed at their paucity (note Tarsem's own miniature camera obscura using a keyhole in the film's early scenes). He produces natives performing a cultural ritual then bursts its bubble by confiding its genesis. The movie's a little easier to follow with lead Lee Pace joined by the film's screenwriters on a second commentary track, as they occasionally take a breath to let the film play. Considering the frustrations of working with a child actress we've heard about from Singh, Pace does not complain. The screenwriters are the ones who tell us that the studios only wanted involvement if the film were made as a kids's movie! Two deleted scenes allow us to see what Tarsem described and rued the loss of in his commentary, an extraordinary crane shot and a fakeout involving the priest and the young prince. Two featurettes show us the making of the film. One would think the one titled Wanderlust would be about the globe trotting aspect of the film but while it begins showing the elephant being transported via commercial ferry, it also includes a lot of work on the hospital scenes. Nostalgia shows the crew at play, notes a couple of birthdays, reminds us of some incredible stunts performed by the actors themselves and reveals Tarsem's 'trick' of letting his cast and most of his crew believe Pace really couldn't walk as the initial scenes were shot. Neither featurette features narration or any interviews and both would have benefited from titles identifying the myriad locations. A feature titled 'previews' are for films other than "The Fall" and no trailer is included. Tarsem Singh had a vision and it's a miraculous one that will now hopefully be seen by many on this sharp DVD transfer. The special features may leave one wanting a little more, but what has been included gives one a good sense of the Tarsem set and numerous anecdotal treasures.