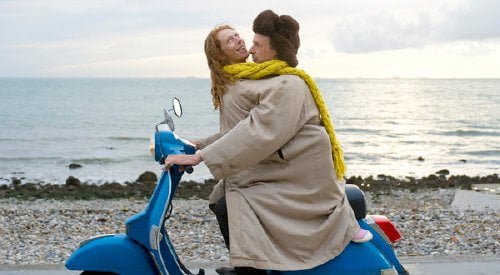 Dom is a in a nowhere job as the night clerk at a seedy Le Havre hotel. A mysterious young woman, without luggage or shoes, arrives and tells Dom that he has three wishes. She grants his first two but, before he decides on his third wish, she disappears. Dom realizes that he has fallen madly in love and searches the city high and low to find “The Fairy.”

In the port of Le Havre, Dom (Dominique Abel) is a night shift hotel clerk having a bad day - his bicycle has broken, he's been soaked in the rain, the hotel's elevator is out of order and an Englishman is attempting to smuggle his dog into a room. But his next guest, the seemingly flaky Fiona (Fiona Gordon), will change his life completely even if he doesn't at first believe her claims to be "The Fairy." Costar/writer/directors Dominique Abel, Fiona Gordon and Bruno Romy ("Rumba") have their own little cottage industry going, creating films that link back to the work of Jacques Tati but also celebrate the arts of dance, mime and movement. They tell stories via a series of set pieces using minimal dialogue, fanciful art direction and gags that defy the laws of nature. Abel and Gordon's combination of dance and slapstick could easily be lifted from their films and performed on stage without benefit of story, but the trio (Romy appears as a cafe owner) find delightful ways to string the routines together. Their third film begins slowly, but stick with it - after establishing Dom's dreary life and Fiona's attempts to change it (she grants him the standard three wishes, but he only voices two before the real action begins), the film begins to pick up speed after we see the penniless fairy steal a dress and high heeled shoes to meet Dom at L'Amour Flou. As a near-blind waiter serves them, they fall in love, then go skinny dipping in the icy Atlantic. Three illegal immigrants (Vladimir Zongo, Destiné M'Bikula Mayemba and Willson Goma, shades of Kaurismäki's "Le Havre") observe as they cook the sausages one of them stole earlier as Fiona nicked her shoes. The underwater scene is a charmer staged on an obvious set with props. Dom and Fiona share a sensuous dance, but when Dom emerges from the water, both Fiona and his suit are gone. The film progresses through a series of escalating adventures as Dom tries to find Fiona. When he breaks her out of a hospital, the two engage in an incredible stunt wearing one coat while riding the scooter that was Dom's first wish. Fiona is obviously pregnant, and in a terrific scene on the hotel's roof, Dom whines about a jammed finger in the foreground as Fiona gives birth in the back, all choreographed to a fare-thee-well. Reunited, the story is now propelled by the perils of baby Jimmy (those with no sense of humor and a low tolerance for child endangerment beware) including falling from a window, sliding around the back of a speeding vehicle and dropping over a waterfall, all while Fiona patiently waits for Dom's third wish. Fiona Gordon, in particular, has the body of a dancer and contortionist and she can amaze doing the most mundane of tasks. There are three dance numbers between her and Dom, the third of which is amusing in that they are the only ones not dancing. The filmmakers' imaginations run towards the whimsical, so when the couple stops in at a bar full of female bikers and Jimmy begins to fuss, one of their members (Anaïs Lemarchand) performs Kurt Weill's "Youkali Tango." The film is utterly enchanting, ending on a note both hopeful and melancholy as the three immigrants, representatives of those three wishes, emerge from the trunk of the Englishman's car to find themselves alone overlooking a coastal sunset.

The longtime writing-directing-acting team of Dominique Abel, Fiona Gordon and Bruno Romy has always had a thing about colorful, vibrant, whimsical song-and-dance kitsch. (See “Rumba (2008)” for another example of their colorful, vibrant, whimsical song-and-dance.) In “The Fairy” they combine their whimsy with a fairy tale Fairy story and the result is a fast paced, beautifully choreographed and danced film that has a heart as big as all outdoors. This is an obvious labor of love for the filmmakers and their collective eye for capturing the beauty, grace and, often, humor of their many dances (with Dom and Fiona) with geometric precision that is fascinating to watch. Very simply, the camera is kept static in a long two shot, leaving the actors to film the frame with their joy of movement. “The Fairy” is oftentimes silly, like when a foreigner tries to check into the hotel with his dog, is refused because he has a dog only to return moments later, sans pooch, but with luggage that walks itself. It is a silly but cute scene and in keeping with the genuine sweet nature of “The Fairy.”