The Face of Love 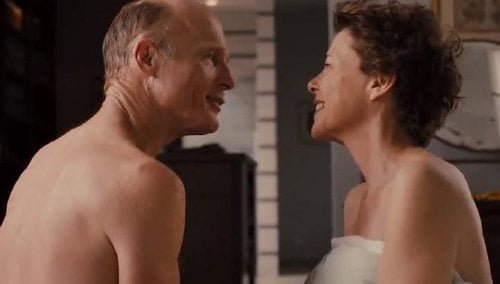 Nikki (Annette Bening) and Garrett (Ed Harris) have been happily married for 30 years and his sudden death, by drowning while on their anniversary in Mexico, is such a shock that it takes years for her to cope with her loss. Just as she finally settles down to a new life, she sees a man who bears more than a striking resemblance to her deceased husband. In fact, Tom is the mirror image of Garrett and, in Nikki’s mind, his is “The Face of Love.”

In attempting to update "Vertigo," cowriter (with Matthew McDuffie)/director Arie Posin ("The Chumscrubber") has committed the same sin that undercut "Enough Said." There are too many evasions of the obvious when a direct acknowledgement would ring truer, if provide less opportunities for melodrama. Ed Harris is good, different enough in both roles and, as Tom, leaving emotional clues that resound upon the film's poignant ending. But Annette Benning doesn't seem grief-stricken as much as flaky and in the Barbara Bel Geddes role, Robin Williams is more a creepy neighbor than wanna-be-more-than-platonic friend, as if he hasn't shaken one of his serial killer roles. Posing painter Tom in front of a paint speckled canvas almost screams "Ed Harris once starred in a movie better than this one! ("Pollock")" and a reference to "Vertigo's" mission bell tower during the film's third act is a little silly, the two-story resort adornment the Taco Bell of authenticity.

Sophomore helmer Arie Posin tells a story, with co-scribe Matthew McDuffle, that is, per the director, one from his youth when his mother saw a man that looked like her late husband. But, “The Face of Love” is very much, strikingly so, a gender-reversed version of Hitchcock’s “Vertigo” – without the vertigo. Annette Bening is the center character in this story of obsession for a lost loved one and gives a decent performance as a woman who was filled with grief but given hope when she first sees Tom. This hope, though, will take a devastating turn. Ed Harris, as both Garrett and Tom, gives more nuance to each of his characters and is a terrific presence. Not so well fleshed out is the character, Roger (Robin Williams), Nikki’s neighbor and a widower of 10 years. He is a lonely man who obviously has a crush on Nikki, but the way Williams plays the part, he comes across as just creepy. Nikki’s daughter, Summer (Jess Weixler), is the catalyst that exposes Nikki’s neurotic obsession of making Tom into Garrett. But this obsession does not really come to the surface until just past the hour mark. The very slow build makes for moments of impatience, but Bening and Harris keeps things flowing well enough. “The Face of Love” is better than it should be, but is a derivative work that feels like a remake of something better.