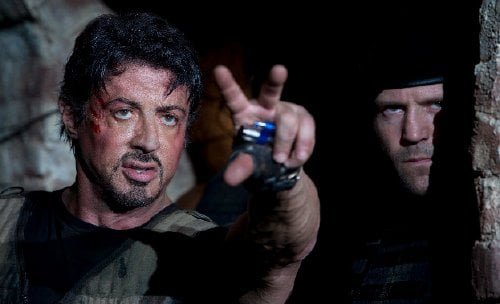 When an ex-CIA guy gets in too deep with some South American cocaine production, a representative, let's call him Mr. Church (Bruce Willis), puts a job out to bid to Trench (Arnold Schwarzenegger) and Barney Ross (Sylvester Stallone) to take out the country's General Garza (David Zayas, "The Savages"). Trench thinks it's too dangerous, so it falls to Ross and his highly skilled team, "The Expendables."

Cowriter (with Dave Callaham, "Doom")/director/star Sylvester Stallone ("Rocky Balboa," "Rambo") assembles a team of ultimate tough guys to make a flick that wouldn't have been out of place on a 1980's drive-in screen. While you may have trouble figuring out who's running where in the film's big climax, Stallone sets off enough explosions to ensure their Brazilian shooting location could be seen from space. "The Expendables," whose title evokes John Wayne's "They Were Expendable," is like "The Losers" cast with the aging elite of the action hero movie boom. The film begins by proudly waving its R rating. Pirates in the Gulf of Aden are holding corporate hostages and Barney and his boys are there to negotiate, so within the first three minutes we're treated to the heavily accented pirate leader's (Amin Joseph) entire torso being blown from his body. Then there's some inter-group dynamics as Barney warns Gunner (Dolph Lundgren, "Rocky IV's" Ivan Drago) not to hang a pirate (it's not their style). Tension mounts more when Yin Yang (Jet Li, "The Forbidden Kingdom") actually stops him from doing so (thereby setting the stage for the Dolph Lundgren/Jet Li faceoff). Back home, Gunner's kicked out of the group by Barney as no longer being trustworthy and the gang gathers at Tool's (Mickey Rourke, "Iron Man 2"), an ex-Expandable tattoo artist and ladies' man. It's never explained why, but on their mission to the fictional island of Vilena, Barney's only accompanied by right hand man, former SAS blade expert Lee Christmas (Jason Statham, the "Transporter" series), who's nursing a broken heart. They fly in on an Albatross seaplane posing as a wildlife organization, meet their comely contact Sandra (Giselle Itié) and scope out the presidential palace where they take out an entire truckload of military before fleeing, leaving Sandra, who turns out to be the general's daughter, between a rock and a hard place. (They do torch a pier on the way out with Christmas embedded in the nose of the plane.) Barney's feeling guilty and Tool advises him to save the girl to save himself, so the whole team ends up returning for the unpaid trip. Just guess who they find in league with Munroe's cronies... Stallone's been on a reinvention jag where he's very savvily returned to his roots. His "Rocky Balboa" was a genuine surprise, the best sequel to the series and a far more fitting goodbye to the character than 'V." With "Rambo," he showed he could go unironically hardcore in the violence department while maintaining a liberal heart. Here, he appears to be just having fun and if you are a Stallone fan it's catching. Sure, the plot is sometimes questionable and the direction and editing not as coherent as his prior two films, but at least it's got some muscle, including that most emotional one. There's a genuine sense of camaraderie within this group (although their forgiveness of one member screams sequel subplot over sense). Stallone and Statham are a classic buddy team, Rourke is far better utilized by Stallone than he was in "Iron Man 2" and Roberts still sports leading man looks. Former NFLer Terry Crews (TV's “Everybody Hates Chris" has a hell of a way with an AA-12 auto assault 12-gauge shotgun, a truly impressive weapon. If one is left wondering where Hale Caesar (Crews) was while his buddies have been battling or just where Munroe, who has Sandra, has been running to for the entire climax (in circles apparently), at least the director hired guys (and gals!) who could perform their own stunts even if he's a little spatially challenged. "The Expendables" may sometimes lack coherence and certainly lacks sheen, but it's got grit, humor and heart. I'd rather watch Stallone and his aging tough guys again than the vacationing "Ocean's Twelve" gang.