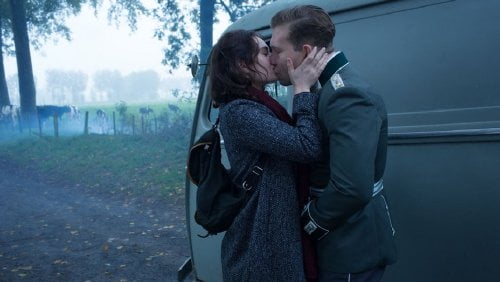 After the signing of the Treaty of Versailles in 1918, Kaiser Wilhelm (Christopher Plummer), the leader of the lost German empire, was exiled to a manor in the Netherlands where he lived quietly for two decades. But, now, it is 1940 and the Nazis have invaded Holland. A young German officer, Captain Stephan Brandt (Jai Courtney) is sent to protect the Kaiser and falls for a beautiful Dutch maid, Mieke (Lily James), in “The Exception.”

Theater director David Leveaux makes his film debut with this adaption of David Judd's 'The Kaiser's Last Kiss,' a historical romance in which Wehrmacht officer Captain Stefan Brandt (Jai Courtney, "Terminator Genisys") proves "The Exception." Wounded on the Polish front, Brandt is assigned to protect exiled Kaiser Wilhelm (Christopher Plummer), whose popularity has risen with a newly nationalist German people. At first Brandt clashes with the Kaiser, his forthright historical accounting of the tragedies that beset his family getting under the man's skin. But they both are taken by the maid, Mieke (Lily James, "Cinderella"), the Kaiser's wife (Janet McTeer) wishes to fire. Mieke has also been noted by the Nazi inspector who warns Brandt of a British spy sending radio messages from the local town). Against orders, Brandt beds Mieke on his first night in Ultrecht, she returning to his room the following evening. But Mieke has a secret - she's a Jew and a spy - although she eventually tells Stefan the former. The household is thrown into turmoil when they learn they are about to receive a visit from Heinrich Himmler. Mieke takes off to meet with the local pastor, the English spy, informing him she plans to assassinate the Nazi Reichsfuhrer. Unbeknownst to her, Brandt has followed and witnessed the meeting. Plummer's Wilhelm has been sentimentalized as a twinkly, grandfatherly Cupid, but the actor still conveys the traits - impetuousness, self-regard, poor judgement - that doomed him to exile. His disgust with the Nazi regime is bred of elitism, at least until he is exposed to Himmler. Wilhelm's wife, Princess Hermine, sees an opportunity to perhaps regain the throne, until she, too, is horrified, first by Himmler's behavior, then by his words. Courtney has been given a plum role here and the Australian actor finally shows evidence of acting talent, perhaps due to the charms of his costar, James, who combines grit, determination and sexy playfulness. Marsdan is positively chilling, the banality of evil personified. Leveaux's direction of Himmler's dinner is one of the film's high points. It stops his characters dead in their tracks, a solemn beat before Leveaux orchestrates a three-pronged denouement delivering suspense and romance, all capped with a hopeful coda. Grade:

Being a major history buff, especially about the two great wars, I was intrigued about the story (fictionally) based on the last days of Kaiser Bill. Since I knew little about the former monarch after WWI, I had an open mind going into this imagining of his waning days. When the story sticks to the Kaiser and his wife, Princess Hermine (Janet McTeer) and the pending sudden visit by Gestapo head, Heinrich Himmler (Eddie Marsen), with all its sinister connotations, it had me intrigued. The greater focus of the film, though, is on the romance between Brandt and Mieke and a spy drama, involving both – on different sides of the conflict. “The Exception” shifts between the Kaiser, his problems with the Nazis (he vocally disdains Goering and Himmler) and his very existence and the extensive and frequent romantic moments between hunky Brandt and gorgeous Mieke. When the “action” shifts from the former to the latter, the attention line shifts dramatically and not in a good way. I kept being taken out of the story I am here to see – about the Kaiser. The spy story line feels tacked on and the showcasing of the young stars is obvious. Christopher Plummer puts his own spin on his Kaiser Bill. He shifts from mirthful romantic, condoning Stephan and Mieke’s illicit and forbidden romance, to bluster about how others, not he, were responsible for the loss of the last war. The changes are done with a broad stroke, but Plummer, as always, proves equal to the task. Janet McTeer, as Hermine, is a nice foil to Plummer as she frets over her husband and his place in history – she is convinced that he will be returned to the throne. The young stars, Courtney and James, are both beautiful people and the romance is nice enough but dominates the heart of the film. I would rather more Kaiser, less lovey-dovey, and a better imagining of the man’s last days.