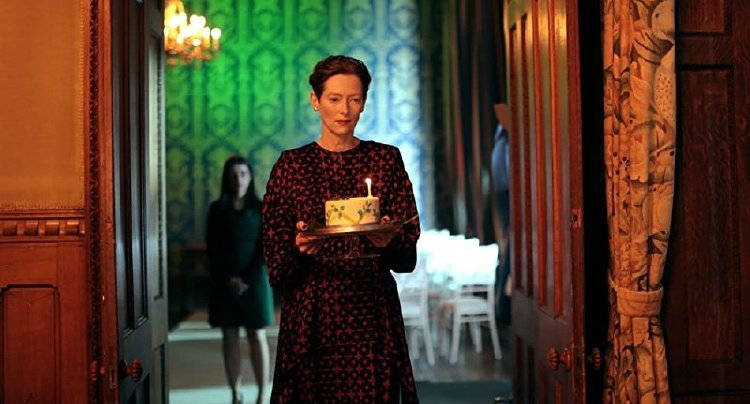 Decades after the events depicted in “The Souvenir” movies, filmmaker Julie Hart (Tilda Swinton, taking over the role from her daughter) takes her mother Rosalind (also Swinton) to the old country estate where she spent much of her childhood to celebrate her birthday.  But while mom settles in nicely, Julie cannot sleep nor work, the old building, now a hotel, featuring mysterious noises, loud banging and a ghostlike figure staring out of its windows.  She is further disturbed to learn that while the place evokes happy memories for her mother, it also recalls painful ones, upsetting news for “The Eternal Daughter.”

Writer/director Joanna Hogg continues to mine her own life for her cinema, this time choosing to explore her relationship with her mother (who, sadly, passed away while she was editing this film) through the gothic horror genre.  It was a brilliant idea, her film playing something like “The Others” as directed by Jacques Tourneur and produced by Hammer, Béla Bartók's ‘Music for Strings, Percussion, and Celesta’ adding just the right notes of retro foreboding.

The eerie tone is immediately set as Julie, Rosalind and Louis, her mother’s Springer spaniel, are driven up a long, tree-lined drive in a swirling, misty fog, the taxi driver noting that he’d once seen a figure in a window of the hotel which couldn’t possibly have been there.  Things go amiss right from the start, the curt desk clerk (Carly-Sophia Davies) at first having trouble finding Julie’s reservation, then claiming the specific room she’d had confirmed is not available.  Eventually things are sorted out, for the first night at least, except that they’re informed they are too late for their dinner reservation.

While Rosalind sleeps tightly, aided by the ‘helpers’ she picks up with a licked fingertip, Julie lies awake, then goes exploring empty hallways and staircases, taking Louis outside to be gazed upon by gargoyles.  During the day, Rosalind goes through a bag of ‘letters, papers and photographs’ she seems oddly reluctant to share with her clearly curious daughter.  Julie finds an upstairs desk where she hopes to begin writing a film about her mother, but cannot seem to get started, instead secretively recording her mother’s recollections on her phone.  But while Rosalind remembers play with cousins under the care of her Aunt Joss, she also remembers losing a brother to the war and being too young to travel to the funeral.  Later in life, she began to miscarry in the very room they are now staying in.  But except for recalling how badly she treated Julie’s father at the time, Rosalind is at peace with these memories whereas Julie feels all her careful planning has been upended, her good intentions misguided.  Things will come to a head during Julie’s carefully planned birthday celebration when her mother professes to not feeling hungry yet urges her daughter to eat and instead is served guilt and minor resentments Julie is horrified to have uttered.

Swinton, who is always only shown in shot-reverse-shot as mother and daughter, creates two entirely different characters both with the same upper British class quirks of reserve and coming at subjects sideways, often via trailing off sentences.  Mother is calm, her hand resting on Louis by her side in bed, whereas Julie hovers, continually attending to desires her mother does not have (we will witness Rosalind telling groundskeeper Bill (Joseph Mydell) that her daughter is a ‘fusspot’).  Swinton also expresses love between her two characters, never more so than the looks she exchanges with herself upon the opening of a thoughtfully chosen gift.  Hogg, who shot at Wales’s Soughton Hall during the pandemic, utilizes her location and the situation masterfully, Julie and Rosalind seemingly the only guests in the sprawling old hotel the desk clerk almost seems to run away from every evening when picked up by an increasingly churlish boyfriend.  Davies is almost comical, a service person (she doubles as the restaurant’s wait staff) who resents every request, part of the ‘great unwelcoming’ of this haunted place.  Mydell is the place’s lone grace note, a kindly man whose own memories of his deceased wife keep him on the job after thirty years and who acts as a sounding board for the troubled Julie.

“The Eternal Daughter’s” climactic twist may not be all that surprising, but Hogg’s film haunts in all kinds of unexpected way.

A24 releases "The Eternal Daughter" in select theaters and on demand on 12/2/22.