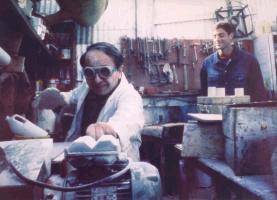 Valerio (newcomer Valerio Foglia Manzillo) eyeballs an odd looking bird at the zoo and a stranger, Peppino (Ernesto Mahieux), a dwarf, explains that it is an African Marabou, a scavenger to which 'the smell of dead bodies is like ragu sauce to a Neopolitan.' Valerio shares Peppino's interest in the animals and the little man presses his card on the handsome younger one, urging him to visit his workshop. Valerio does and soon becomes an assistant to "The Embalmer."

Or taxidermist, which is a more correct translation of the Italian title and not the only reference to "Psycho" made in this creepy psychological thriller. Mahieux's unsettling performance, an alienating coastal location and a story that takes the unexpected path are all beautifully orchestrated by director Matteo Garrone. "The Embalmer" loses its grip with an abrupt and pedestrian ending, although the final imagery is haunting. Peppino shows up at the restaurant Valerio works at and offers him a significant salary increase, much to the consternation of Valerio's girlfriend Manuela, who tells him Peppino is in with the mafia. Valerio seems to enjoy Peppino's company, however, and he proves a quick learner. In one of the film's most startling images, we see the odd couple in white lab coats working on a spitted bull. Peppino gives all credit to Valerio, whom he has gifted with a golden ring, when the stuffed beast (emblematic of that ring?) is delivered to his clients. Another warning signal is raised when Valerio finds himself in bed with two of Peppino's 'girlfriends' and Peppino himself, but Valerio is not alarmed enough to refuse Peppino's offer to move in when Valerio's brother-in-law becomes outraged at his late comings and goings. At this point, the filmmakers let us, but not Valerio, know that Peppino is in for 20 million lire to Don Pasqualino, who sends him to Cremona to use his trade to pack a dead body with drugs. The duo begin a road trip, but when their car breaks down, Peppino goes on, leaving Valerio at the garage where he meets Deborah (Elisabetta Rocchetti), who becomes Peppino's unwanted baggage on the return trip. Using a Roman tabloid story as a springboard, Garrone and co-writers Ugo Chiti and Massimo Gaudioso give a conventional lover's triangle dark twists. Valerio appears to be a typical lusty macho Italian male, yet he clearly feels drawn towards Peppino, even though he's sometimes made uncomfortable by him. Valerio is the loose cannon in the equation. Peppino may use manipulation to attain his desires, but he's also fighting against two social stigmas - homosexuality and dwarfism. Each of these men is getting something from the other until Deborah comes between them (beautifully visualized by cinematographer Marco Spoletini ("Maximum Velocity") in an overhead shot that places Deborah lying across the end of a hotel bed, reaching out to armchair-banished Peppino). We don't know how far any of these characters will go and they seem utterly isolated in the depressing coastal town of industrial looking apartment barracks Garrone has set them in (not unlike Giulietta Masina's home in "Nights of Cabiria"). Mahieux gives an intriguing performance, a reflection of how he's seen by others with tiny truisms revealed in his trade (We first see Peppino and Valerio from a scavenging bird's POV, Peppino shows Valerio the new piece he's proudest of - a rare shrew saved from his own cat's mouth - to be stuffed and admired). He is good natured largesse with Valerio and clients, a favored child with the Pasqualinos, only made grotesque in the presence of Deborah, who outfits him like a circus freak. He is rarely shown in his own realm. When Garrone lets us watch Peppino eavesdrop on Valerio and Deborah fighting, he's cast against a marine blue wall, as rich as the red velvet curtains of David Lynch's Dream Dwarf and a foreshadowing of his future. Garrone chose to cast model Manzillo in his first film role as Valerio and his instincts have paid off. Valerio is a handsome man who doesn't allow us to get beneath his skin. His impenetrability gives the story an edge. Rocchetti has an earthy appeal as the only member of the trio who is forthright about her desires. Spoletini's camerawork accentuates the differences between the men, but also uses close-ups for seduction, leveling the playing field. The film has gorgeous images, although some scenes are underlit to the point of obscuring the action. Original music by Banda Osiris bathes the film with moody, discordant jazz.