The Electrical Life of Louis Wain 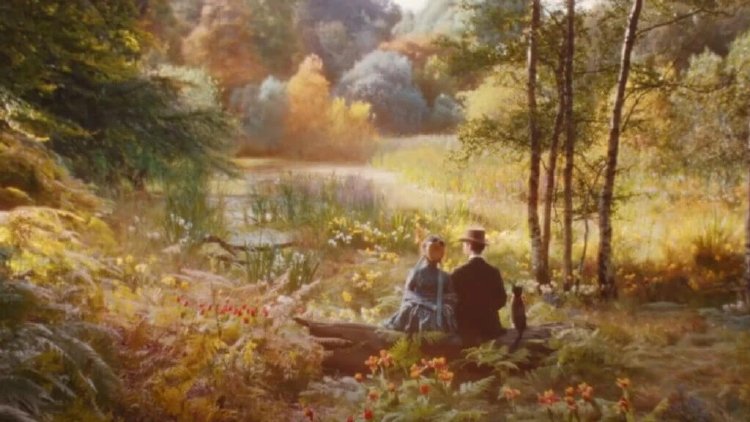 In a Victorian England obsessed with the potential of electricity, an eccentric illustrator in his early twenties with no head for finance or business is left to support his Mother (Phoebe Nicholls) and five sisters, the eldest of whom, Caroline (Andrea Riseborough), would have been far better suited.  After a scandalous marriage to his sisters’ governess, a woman ten years his senior and beneath his station, he became inspired by the pet cat, Peter, who he and Emily (Claire Foy) found in the rain one day.  Cowriter (with Simon Stephenson)/director Will Sharpe charts the marriage and the fame that followed in “The Electrical Life of Louis Wain.”

This whimsical biopic is a tale neatly bisected by the death of Emily Richardson, the first half charting an adorably awkward courtship, the second the anthropomorphized cat drawings which made Louis Wain (Benedict Cumberbatch) famous if not rich (he failed to copyright his work).  The whole is introduced by narrator Olivia Colman, who tells us that Wain created a ‘cat society,’ popularizing the animal as a pet.  The film makes some odd artistic choices, like obvious background matte drawings (in one scene it appears a horse drawn carriage may ride right into a wall depicting the horizon), and veers into sentimentality, but it is buoyed by the performances of Cumberbatch and Foy (the actress who plays a character ten years Wain’s senior is actually eight years younger than her costar), with Riseborough’s outstanding supporting turn eclipsing all.

Cumberbatch wears Wain as a man with his head in the clouds, described herein as someone who has to keep moving to calm the chaos in his head (autism is strongly implied, although doctors at the time pointed to schizophrenia which claimed his middle sister Marie (Hayley Squires, "I, Daniel Blake")).  Returning to London on a train, Dan Rider (Adeel Akhtar, HBO's 'Back to Life') notes his artistic rendering of a charging bull and the artist’s muddy appearance, something Louis explains is the result of being attacked by said animal (Rider will reappear at a fateful moment in the last act).

After next attending a boxing lesson, Louis keeps an appointment with Sir William Ingram (Toby Jones) who is duly impressed not only with the man’s portfolio, but his exhibition of ambidextrous portraiture.  He offers him a position with the Illustrated London News, but Louis tells him he doesn’t have the time!  The lively feminine household he returns to is upside down with the arrival of the new governess Caroline has hired, something Louis immediately objects to, claiming he can perform this duty as well.  Caroline is adamant he needs to work full time.  Louis changes his mind once he lays eyes on Emily.

Cumberbatch and Foy are delightful together, he making Louis’ complete lack of societal grace complicated by a disregard for feminine modesty due to household familiarity charming, she initially flustered then, well, charmed (their first kiss is one of the most comical ever depicted).  The couple lives within a besotted, fantastical bubble as disapproval swirls around them.  They make a home in the country where Peter, the black and white cat, becomes the third member of their household, a comfort to Emily who dies of breast cancer three years after their marriage.

The second half of the film depicts a more glamorous life, Wain even spending time in New York City as his fame spreads, but finances remain a continual issue, the family living in squalor, and tragedy strikes again with his sister’s mental illness.  Sir William, as ever, Louis’ most understanding and loyal friend, offers his vacation lodge, but loss continues to pursue Louis, Peter’s death breaking his last hold on sanity.  When Rider, touring a mental asylum in Springfield, encounters Wain, he makes his situation a cause célèbre, the likes of H.G. Wells (Nick Cave) drumming up enough financial support to move him to a place where he could live out his life with his beloved cats.

Sharpe and cinematographer Erik Alexander Wilson chose a 4:3 aspect ratio, which gives the film the appearance of a picture book, employing a black and white iris shot for a harrowing childhood memory.  Wain's drawings are featured in numerous ways, their evolution into something like electrical psychedelia paralleling his mental decline.  Mention must be made of Riseborough, whose put upon Caroline with her downturned mouth is always speaking sharply when not outright yelling, yet whose love for her brother shines through, a difficult task.

You may have never heard of Louis Wain, but you will most likely recognize his mischievous Victorian cats (he also illustrated the English language version of the German children’s book Struwwelpeter).  Sharpe may veer into the twee and maudlin, but his spikier notes enliven “The Electrical Life of Louis Wain.”

Louis Wain (Benedict Cumberbatch) was a prolific artist in the late 19th century specializing in landscapes and animals. He is most renowned for his portraits of cats, of which there were many, but this story is really about “The Electric Life of Louis Wain.”

If, like me, you never heard of Louis Wain, then director and co-writer (with Simon Stephenson) Will Sharpe’s “The Electric Life of Louis Wain” will rectify that. I did realize, as I watched his biography unfold, that I am a bit familiar with the artist’s prolific cat art but not with the man’s troubled life.

The period biography neatly lays out Louis’s life, beginning with him as the only male in his femme-dominated family world. After his father’s death, he became the sole support for his mom and five younger sisters. At the same time, he notices the girl’s governess, Miss Emily Richardson, and falls in love and they marry – a societal scandal as Louis married “beneath” his status. But, this was the best of times for the man and the inspiration for his famous drawings and portraits.

Tragedy, when his beloved Emily dies of breast cancer, is followed by increasingly debilitating mental illness that was diagnosed as schizophrenia – which has since been disputed. All the while, as he fell increasingly into his psychosis, he produced many of his famous cat portraits and his art evolved over the many years of his life, supporting the dispute.

Benedict Cumberbatch, as I would expect, becomes Louis Wain, with all of his ticks and troubles. The display of his devolving mental state is juxtaposed with the production of his art and the fame it brought him and the actor captures both aspects with skill. Of the supporting cast, Claire Foy stands out as the intelligent and supportive Emily and, unfortunately, leaves a notable gap when no longer in the picture.

The period production and costume are spot on in an organic way, making it feel like the late 19th, early 20th centuries time. And, looking a little into Wain's copious artworks, also captures the excitement his cat portraits caused for the average Joe.