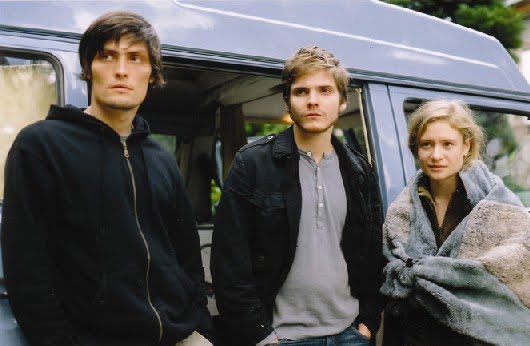 Jule (Julia Jentsch) is a waitress in deep financial difficulties. She had a car accident with a wealthy businessman (her uninsured fault), totaling his Mercedes, and has assumed the enormous debt to pay him back. She moves in with her boyfriend, Peter (Stipe Erceg), and his roommate, Jan (Daniel Bruhl), and learns they, too, have a secret: they break into the homes of the rich, pile up the expensive furniture and leave notes saying “Your days of plenty are numbered.” When Peter takes of on holiday to Spain, Jule enlists Jan’s help to break into the businessman, Hardenberg’s (Burghart Kraussner), palatial home but things go wrong from the start in “The Educkators.”

'It's not who made the gun, it's who pulls the trigger.' Jan (Daniel Brühl, "Good Bye Lenin!," "Ladies in Lavender") is an idealist who believes that rich Western nations can end global poverty and suffering. He and his slightly less morally committed buddy Peter (Stipe Erceg), a former security alarm installer, target wealthy homes for break-ins - but they don't steal anything. Instead, they rearrange furniture in arresting ways and leave notes like 'Your days of plenty are numbered' and 'You have too much money' and sign themselves "The Edukators." Cowriter (with Katharina Held )/director Hans Weingartner (a production assistant and 'cafe patron' on "Before Sunset") has done a smart thing - he gets people thinking about basic human rights concepts but couches them in an entertaining and funny film. Weingartner's mid-point twist in the form of Burghart Klaußner's (Brühl's dad in "Good Bye Lenin!") Hardenberg takes the Stockholm Syndrome and turns it on its ear. There's also a love triangle, but even that is amusingly politicized, held up as an example that the differences between the older and younger generations are maybe not so different after all. Peter's girlfriend Jule (Julia Jentsch, "Downfall") joins them during the day for things like protesting outside a local athletic shoe store (the sneakers that sell for 100 Euros in Berlin are produced in Southeast Asia for 5), but she knows nothing about their late night exploits. Until, that is, Peter must leave for Barcelona just as Jule is being thrown out of her apartment for being six months late with the rent. Peter enlists Jan, whose intensity Jule is a bit frightened of, to help her turn over her apartment and the two end up connecting rather passionately. Jan prods Jule about the financial problems that cost her her flat and is horrified to learn that she's 94,500 Euro in debt because she totalled a businessman's Mercedes while not carrying insurance - just the type of social imbalance that infuriates him. Jan takes Jule on a late night drive, then takes her into his confidence when they stop near a house targeted by the Edukators. Jule realizes they're around the corner from the man whose car she hit and begs Jan to induct her immediately. Jule advises against such spontaneity, but goes along and is proven right when they must leave in haste after an alarm is tripped. Worse, they must return when Jule realizes she's left her cell phone in Hardenberg's house and the owner returns and recognizes Jule. Jan knocks him out and the two call Peter for help. The trio, with Peter none the wiser regarding Jan and Jule, kidnap Hardenberg with no real plan, running off to an alpine chalet owned by Jule's uncle. The change in scenery, an environmentalist's paradise of green blue lakes and majestic mountains, is an apt setting for what turns out to be an impromptu gathering of radicals - Hardenberg, it turns out, was a leader in Rudi Dutschke's SDS (Sozialistischer Deutscher Studentenbund). It's as if the Symbionese Liberation Army had nabbed one of "The Big Chill's" weekenders. Burghart Klaußner is just terrific as the man with the surprising past, someone it is impossible to dislike once his fear dissipates. Klaußner teeters for a little while, then lets himself go, revelling in the memories of Hardenberg's youth. The actor shows us how these three young kids are just the breath of fresh air he needed to rethink a life that's been on autopilot. Brühl is very charismatic as the fervent socialist, but the camera loves Julia Jentsch even more - the two make a handsome couple (and it is to Brühl's credit that he comes across as the nerdy type who may not normally do too well with the opposite sex). Weingartner uses Jule like a hand grenade - she's not only the cause of conflict between Jan and Peter but she's more destructive, an ingredient that pushes the Edukators into extremism. Thankfully, Weingartner also endows Jule with compassion and a healthy dose of responsibility. As Peter, Stipe Erceg is the shallowest character, the good looking guy who is perhaps used to things coming easily. Erceg's character may be the dimmest, but he gets one of the film's best lines and delivers it with conviction. "The Edukators" does tend to meander a bit - some trimming would have resulted in a tighter film. It also relies on some tricky end editing that won't surprise anyone who's seen "The Silence of the Lambs." But mostly, Weingartner's film works. "The Edukators" is a refreshing portrait of radicalism, one where humor and humanity conquer rage and violence.

This is a solid socio-political satire about idealism and practicality. As the first hour unfolds, we see Jule and her daunting plight to make ends meet. Since her unfortunate car accident, almost all of her meager income from waitress work has gone to pay off the 100,000 Euro debt and because of this is evicted from her apartment. Peter offers to let her stay with him and Jan but doesn’t tell her about their anarchistic vandalism. He offers to take her on holiday to Barcelona but she has to turn him down because she has to repaint the apartment from which she is being evicted. He offers her Jan’s help. Sparks start to fly as Jule and Jan get to know each other. He, without thinking, offers to show her what he and Peter do on their long nights away and she is intrigued by the danger and excitement of their breaking and entry. Then, she realizes that Hardenberg’s home is nearby and begs Jan to take her there. Things quickly escalate from taking a look to breaking in and vandalizing the place. Their final act of defiance – throwing an expensive sofa into the pool – results with Jule and Jan in each other’s arms. This first blush of romance comes to a sudden halt when Peter returns from his trip, expecting to simply pick up where he left off with Jule. Then, she becomes frantic when she realizes that she left her cell phone somewhere in Hardenberg’s house and they must go back in. Once there, things go from bad to worse when Jule is surprised by the owner’s unexpected return. It takes about an hour to get to this point where things start to happen Fortunately, the second half is enriched when Hardenberg confronts Jule and Jan. Jan knocks the man out and, realizing the trouble they are now in, seeks Peter’s help. With their options limited to mayhem or kidnapping, they choose the later and spirit their captive to the empty, remote cottage belonging to her uncle. This is where “The Edukators” switched gears and gets itself on the fast track. Hardenberg’s sudden appearance and subsequent kidnapping revs things up considerably. As the quartet spend the hours together in isolation, they get to know each other and learn things about Hardenberg that are far different than they ever expected. Sure, he is a wealthy capitalist now but his roots are the same as his young abductors’. The conversations and revelations that take place in the film’s last half save it from the indulgences of the first. The young actors do a solid job giving depth to their idealistic characters, especially Daniel Bruhl as the initially brooding Jan. He gives a full arc to the young anarchist as he goes from angry at the world to smitten with Jule. Burghart Kraussner, as Hardenberg, makes “The Edukators” a far better film when he enters the scene. He is not what he seems (or, is he?) as his life story is laid out for his captors. This creates an optimistic ambiguity in the end that makes the film one to be recommended. The Edukators” could easily have been cut by 15 minutes (mostly the languid, overly long interludes between Jule and Jan) and would have been a better film. As it is, it makes its statements on right versus wrong, strong versus weak and capitalism versus democracy without preaching and in an often wryly-amusing, satiric way.