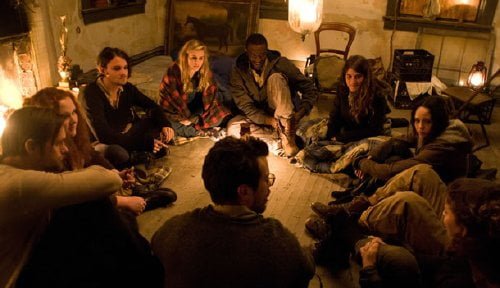 An environmental terrorist group is turning the dangerous products produced by unscrupulous corporations on those companies’ CEOs to teach them a lesson (even if it kills them). This brings in a private security firm that is intent on infiltrating to terrorists and putting to an end the group that call themselves “The East.”

Former FBI agent Jane (Brit Marling, "Another Earth") gets a hot first assignment with her new job at Hiller Brood, a security firm who unyieldingly protects its clients from anti-corporate terrorism. Undercover as Sarah Moss, Jane will begin to question just whose side she's on when she infiltrates the freegan anarchist collective known as "The East." Cowriter (with star Brit Marling)/director Zal Batmanglij has assembled a fine cast, but their second outing together is basically a remake of their first, "Sound of My Voice." Replace that film's cult with this film's collective, a group bonded via trust rituals and unusual dietary demands; an outsider whose truth remains suspect and an ending based on betrayal and essentially you've got the same film. Heck, there's even a figure holding a lamp in the darkness. Marling's ethereal performance worked in the former given her otherworldly character, but here she's just opaque. Sarah hits the road, latching onto groups who might fit the profile. When she finds one, she's violently attacked by railway security for sticking up for Luca (Shiloh Fernandez, 2013's "Evil Dead"), battered and berated while making a peaceable exit from the freight car. This action gains Luca's trust, so when Sarah fakes an injury, he brings her into the collective to be administered to by Doc (Toby Kebbell, "Control," "The Conspirator"), a former med student who joined The East after a drug they were dispensing on a humanitarian mission killed his sister and left him with debilitating side effects. Group leader Benji (Alexander Skarsgård, HBO's 'True Blood') puts her to the test by demanding she wear a straight jacket at dinner, something the entire group has done, and invites her to eat first. Her solution isn't the right one. Nonetheless, she manipulates herself back into most of the group's good graces (there are hints of a spark between herself and Benji) and finds herself participating in a 'jam,' Doc getting four of them into a party thrown by McCabe/Gray to celebrate a pharmaceutical deal with the military via former college buddy Porty McCabe (Billy Magnussen, "Damsels in Distress"), others in as catering waitstaff. When Sarah figures out what they intend to do, she makes a secret call to boss Sharon (Patricia Clarkson, "Cairo Time," "Easy A"), who coldly informs her that McCabe/Gray is not her client. "The East" pivots on old question as to just what is morally permissible to battle evil - people who knowingly poison for profit, but the filmmakers go overboard stacking their deck. Seeing what The East accomplish at a cocktail party only leads one to wonder how quickly they'd have been enveloped in scandal anyway. The 'jam' concept is silly, a screenwriting attempt at creating jargon that never feels natural and the second one they go on, personal to one of the members as they all are, almost calls for The Toxic Avenger. The conclusion is weak, the course of action taken meant to champion education over retribution a mere salve. Marling isn't dynamic enough a character to fully invest in and one could care less about the breakdown of her private life. Clarkson is used as a symbol of cold profiteering and provides exposition. But The East players are far more interesting. Skarsgård has been turning in a series of performances that show a softer, more mournful side than his ruthless 'True Blood' bloodsucker. Ellen Page ("Juno," "Inception") is powerful as the non-trusting Izzy, who takes on a surprising figure in her 'jam' gone bad. But it's the lesser known players who really shine. Hillary Baack is like a young Lili Taylor as Eve, a deaf group member who's out of the action too son and Danielle Macdonald is a tough-as-nails Tess. Kebbell's always great and his Doc is a complex and sympathetic character. Fernandez's gender-bending take on Luca adds yet another element to this intriguing mix. Batmanglij's technical filmmaking skills have grown, the production making great use of the Shreveport's run down Ogilvy Weiner Mansion as The East's squat contrasted against the corporate sterility and monied haunts of their opponents. He and Marling spent a summer living as freegans and have worked that element into their story well. It's the rest of it that feels like day old bread.

This is the second film, and second writing collaboration with his star Brit Marling, by director Taj Batmanglij – the first being “Sound of My Voice (2011).” The sophomore effort, though, looks and feels much like the earlier film. Here, there is a cult of environmental terrorist, the East, that threatens corporate CEOs with a taste of their own environmental pollution. Enter Sarah (Marling), an undercover agent for a corporate security firm who has to infiltrate the group and put an end to their corporate terror plans. She succeeds in penetrating the East but she did not expect the charismatic leader of the cult, Benji (Alexander Skarsgard). The intensity of his conviction flows from the man and Sarah begins to have second thoughts about her mission. When she goes along on their first “jam” (that is what they call their terrorist acts), Sarah begins to realize that the East may not be the environmental protection monsters she is told they are by her handler, Sharon (Patricia Clarkson), a powerful executive in the security firm. “The East” wears its heart on its sleeve as it presents a sympathetic viewpoint of the eco-terrorist and there desire for change, albeit with naïveté. Corporate heads and their henchmen are pictured as destroyers of the environment. The good guys (corporate executives), here, are really the bad guys, and the bad guys (the terrorists) are really good guys. And, Sarah is caught in the middle. While Marling does a solid (if unremarkable) job in creating her Sarah, it is the supporting cast that really holds the stage. Alexander Skarsgard is also solid and, as with Brit, and gives an unremarkable performance. Where the cast shines is in the supporting members. Ellen Page, especially, gives real depth to her character Izzy. Izzy’s intensity and dedication, her loyalty to her clan, are part of her motivation, but she has more to lose. Hillary Baack plays a deaf member of the cult who Sarah first confides in. The actress makes such an impression, when she leaves the story, you do not want her to, Baack is that good. The cult members have some depth, such as Shiloh Fernandez’s Luca, the first member of the East that she meets and takes her into the thick of the cult. Direction and other behind the camera chores are done well enough but, shall I say it? Unremarkable. If Batmanglij and Marling collaborate again, they should try to create a story that is fresh, not a retread.