The Earth is Blue as an Orange 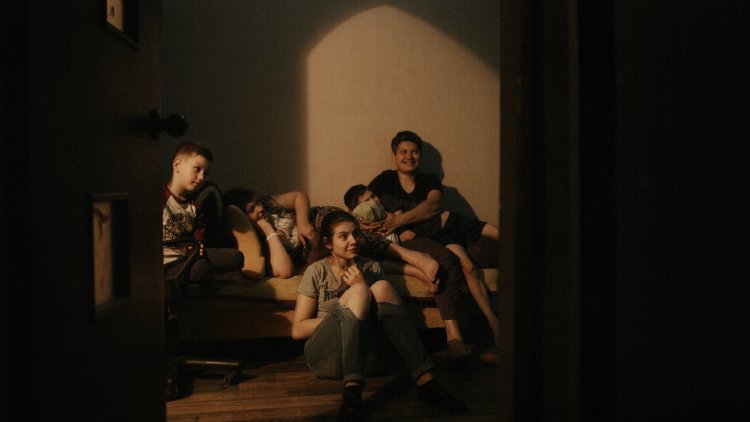 The town of Krasnohorivka in Ukraine’s Donbas region has been on the front line of Russia’s aggression since 2014.  When a teenager in her film camp invited her to her home there, writer/director Iryna Tsilyk ("Invisible Battalion") witnessed a family coping with war by making a film about their experience.  Her ensuing documentary about them, winner of the World Cinema Documentary directing award at the 2020 Sundance Film Festival, is called after a line in a poem about things that shouldn’t be combined but are, “The Earth Is Blue as an Orange.”

You might be surprised after watching this film to learn that Anna Trofymchuk, the single mother of four children, didn’t direct it as the film opens with her trying to film her young son Vlad against a black background.  She achieves a beautiful portrait, the boy’s face expressing his discomfort with the spotlight while also revealing the facial features of the man he will become.  But when her teenaged daughter Anastasiia closes the clapboard to signify the next shot, its snap is overwhelmed by an explosion outside.  The Trofymchuks pour out of their cozy home to discover that their neighbors’ house has been decimated.

This is a film about adult women and children in war, and in its cozy domesticity full of caring creatives, in some ways it is like a modern day equivalent of ‘Little Women.’  A child brushes his teeth above a bathroom sink containing a pet turtle.  Sisters prepare for a formal school dance.  The family gathers in a small room to watch a silent movie.  Later the eldest, Myroslava, reads aloud about camera lenses in bed with her mother.  There will be rejoicing when she wins a scholarship to study cinematography.

Yet the women of Louisa May Alcott’s story never encountered tanks, as Anna does here.  Thankfully they are Ukrainian and she gathers the soldiers to photograph them – ‘say cinema!’And while they are pictured dropping through a trap door to a cramped underground shelter, Anna lectures Myroslava about the necessity of including a tracking shot which will show the devastation of their city in her film so that people will really understand there is a war going on.

In the end, Tsilyk trains her camera on the Trofymchuks and their friends and neighbors watching Myroslava’s film, ‘2014,’ a wide range of emotions flickering across their faces.  This filming of a family filming is an illustration of the healing properties of art in life during wartime.

Ukrainian single mom Anna, her four children and her family shelter in their basement from the Russian invaders of the Donbas region in 2014. The whole family has a passion for cinema and, in a time of great strife, band together to tell, on video, their story in “The Earth is Blue as an Orange.”

At the time, just eight years ago, a story of survival and creativity during a war would have been inspirational. Now, things have radically changed in Ukraine and such a story seems rather quaint, almost a throwback to a “gentler” time. I wondered, as I watched this charming family document during a time of danger and strife, what happened to this little family of filmmakers. But, let me put this wonder aside and talk about the film, by Lithuanian documentary filmmaker Iryna Tsilyk.

Anna and her extended family shelter against the random deadly bombings by the Russian army, retreating to their well-supplied basement for safety. They also, uniformly, have a passion for cinema, with one, Anna’s daughter Myroslava, aspiring to go to film school to become a director of photography. This familial passion prompts them to make a movie about their life in a time of war.

I admire the family and the filmmaker for putting together such a heartfelt documentary that is both about the war and about a family passion. I fully expected, by the end of the “The Earth is Blue…” to see their creation play out. It does, but not in the way I expected. I like their way better.

Film Movement releases "The Earth is Blue as an Orange" in theaters and virtually on 4/22/22 - click here for playdates.  10% of gross ticket sales will be donated to the Ukraine Crisis Fund.