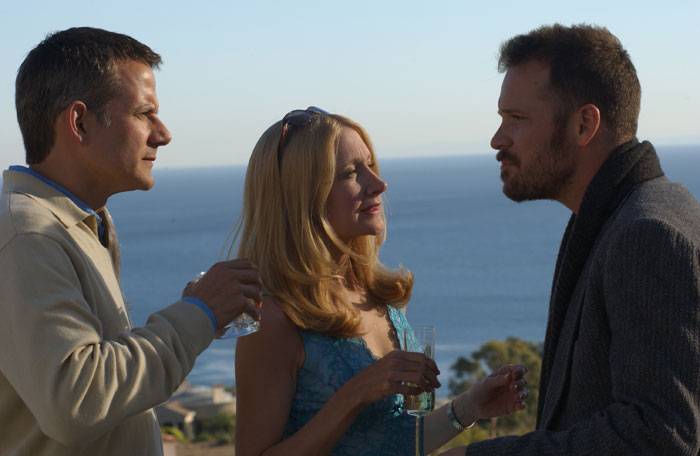 "Woe to him who seeks to please rather than to appall." Herman Melville, "Moby Dick"

Long struggling screenwriter Robert (Peter Sarsgaard, "Jarhead") is in an emotionally fragile state when he is unexpectedly courted by successful Hollywood producer Jeffrey (Campbell Scott, "The Exorcism of Emily Rose") for a personal work based on his relationship with his dead lover and former agent Malcolm (Bill Camp, "Rounders"). As Jeffrey persuades Robert to change the story's central relationship to be heterosexual, the bisexual producer also seduces the writer. Robert, who admires Jeffrey's wife Elaine (Patricia Clarkson, "Good Night, and Good Luck"), doesn't realize he is also engaging in a dual relationship with her as she masquerades as Malcolm in his favorite chat room in "The Dying Gaul." Writer/director Craig Lucas ("The Secret Lives of Dentists") makes his directorial debut with his own adaptation of his stage play, but while the film sports a stylish look and its three stars give him their all, it is ultimately his own words that take the edge off his film. Peter Sarsgaard is particularly exceptional in this dark look at art and artifice, but "The Dying Gaul's" twists may prove too much of a hairpin curve for most. While Jeffrey sidles up to Robert's financial dreams and stokes his ego, Elaine connects as a fellow writer and offers sympathy for his recent loss. In his vulnerable state, Robert is seduced on all counts. But the member of this triangle whom Robert feels the most guilt over is surprisingly devious. At first Robert thinks he's connected with a supportive stranger on menonaparkbench.com and divulges information he's never shared about Malcolm's death and about his current affair (Lucas cuts to Elaine's shocked reaction and pounds the point home with an orgiastic sprinkler spray hitting a corner window of her office). Using information obtained from the shrink they have in common, Dr. Foss (Linda Emond, "North Country"), Elaine creates new user ArckAngell 1966 and spins such an airtight persona as a heavenly spirit, that Robert almost truly believes he's online with Malcolm (it should be noted that Robert is a Buddhist who believes in reincarnation). But Elaine becomes overconfident in her deception and even though she successfully funnels Robert's suspicions away from Jeffrey, her use of information Robert divulged to the couple betrays her identity. Robert's surprising retaliation paints his producer in his own image. Per his own comments, Lucas observes that most people perceive the surviving partner of an AIDS loss as noble but that he believes suffering breeds cruelty. However, in creating such as strong initial bond between Robert and Elaine and presenting them as nice and caring people, their actions toward each other are difficult to believe. Elaine's grief would more credibly be directed at Jeffrey, especially given Robert's vulnerability and regret. Still, the actors are terrific. Sarsgaard brings gentleness and the intelligent perception of the artist to Robert while also making him interpersonally and professionally naive. Campbell Scott is a smooth salesman, a businessman used to winning the deal and yet, he, too, so his surprise at his own passion for Jeffrey feels real. The mens' first lovemaking session is incredibly raw, with Sarsgaard investing emotion from the pit of his being. Clarkson is always a joy to watch, but her character as written here is difficult to empathize with. "The Dying Gaul" (the title refers to a Roman statue of a dying enemy soldier) is stunning to look at with its angular architectural design (production design by Vincent Jefferds, "Max Keeble's Big Move"), all windows and panels and angles, minimalist furniture and infinity pools. The film's very first shot (cinematography by Bobby Bukowski, "Saved!") conveys much about the world Robert's about to enter in the size and form of the glass he's given for his sparkling water. Lucas enlivens his chat room sessions with an inventive use of voiceover that brings Malcolm into the narration as the spirit Robert envisions.