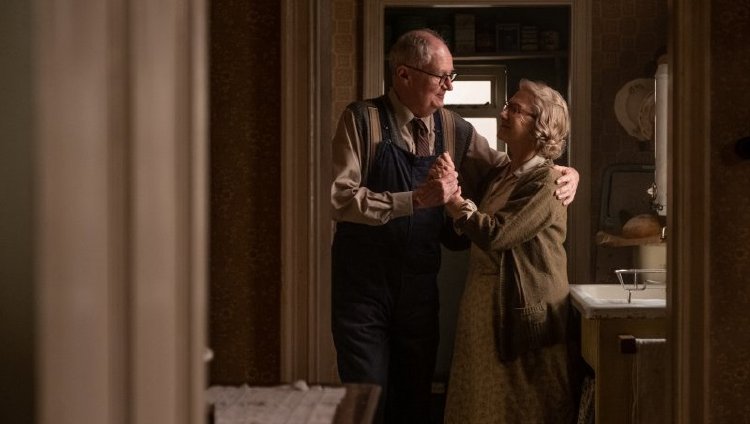 In 1961 Newcastle, Kempton Bunton (Jim Broadbent) is on a mission to get television licenses, required to support the BBC, free for veterans and old age pensioners.  His wife Dorothy (Helen Mirren), who works as a housekeeper for local Councillor’s wife Mrs. Gowling (Anna Maxwell Martin, "Philomena"), is mortified by his exploits, especially when a television crew arrives to cover his arrest.  But Kempton, who writes social justice screenplays that never get produced, is riled up even further when he learns the government has paid 141K British Pounds to keep a Goya painting in London’s National Gallery and it gives him an alternate idea for “The Duke.”

Broadbent and Mirren are in top form as a middle-aged couple finding one another once again after their differences have intensified in grief for the lost daughter, Marian, whose death at eighteen opened a chasm between them.  'National Theatre Live: Young Marx' writers Richard Bean and Clive Coleman lace this true tale with plenty of heart and humor, director Roger Michell ("Enduring Love," "Tea With the Dames") orchestrating tonal shifts with finesse.

Broadbent’s cheeky Bunton is warned by his son Jackie (Fionn Whitehead, "Dunkirk") that the government truck checking for illegal broadcast signals is heading their way, so the man removes the coil from their set that receives the BBC.  He’s sitting watching ITV, the commercial, ad-supported station, when they arrive but no matter, he’s arrested anyway.  Dorothy offers to quit her job so as not to embarrass her employer but Mrs. Gowling just happens to agree with Kempton’s logic.  Gowling even steps up to sign his petition as he sits in the town center with a ‘Free TV for OAP’ sign.

Kempton further riles his wife with his inability to hold a job for his same social justice tendencies, fired by his taxi firm for failing to charge an aged war veteran and a bakery for standing up for a Pakistani coworker.  Neither is happy when their wayward older son Kenny (Jack Bandeira, "Gunpowder Milkshake") shows up to stay for a while with his girlfriend Pammy (Charlotte Spencer, 2021's "Cinderella") and then Jackie shows dad what he’s acquired to aid his license scheme – the Goya.  When both sons’ actions converge, Kempton’s attempt to do the right thing lands him in hot water.

This is a great story, beautifully told, combining a do-gooder with a heart of gold with the only theft in the history of the National Gallery.  Broadbent embodies Bunton as a charming, sentimental bumbler, a quality which, at least envisioned here, went a long way towards the light sentence he eventually received.  Mirren tosses glamour out the window to encompass a Newcastle housekeeper with tight gray curls, housecoat and strong work ethic, her character’s pent up grief given outlet through her husband’s writing.  The two veteran actors engage in a dance of conflict and courtship.  Whitehead provides earnest support as a chip off the old block and courtroom scenes are enlivened by the arch defense of Jeremy Hutchinson QC (Matthew Goode) against the frustrated righteousness of Judge Aarvold (James Wilby, "Maurice"), the scene subtly enjoyed by its Clerk of the Court (Heather Craney, "Vera Drake").

“The Duke” proves a commoner can be king.  Michell’s given us a wily crowd-pleaser.

1961. Kempton Bunton (Jim Broadbent), a 60-year old Newcastle, England taxi driver, turned himself in for the theft of a portrait, from the National Gallery, of the Duke of Wellington, by Goya and potentially worth millions. His motive? To make the government do something to ease the hard plight of the elderly pensioners and give them the dignity they deserve in “The Duke.”

Based on a true story (with literary license taken), “The Duke” introduces us to Mr. Bunton and his personal protest against the government requirement that senior citizens on a fixed pension pay a fee to watch TV. Then, Kempton sees the story about the National Gallery purchase, for 140000 British pounds, the Goya oil painting.

He in incensed by the government’s cavalier spending of so much money that should be used to give the elderly pensioners a break from at least one fee. Then, he hatches a plan to steal said portrait and hold it ransom to change the TV laws. This is the body of the Kempton’s story and it is about one man’s battle against the system for rights justice.

“The Duke” belongs to Jim Broadbent who fully envelopes Kempton Bunton and gives his character life and palpable depth that keeps you rooting for the funny and dedicated crusader. Helen Mirren has the tough role as Bunton’s long suffering and stoic wife, Dorothy, who is all used to her husband’s “eccentricities.” Her change of heart toward Kempton seemed forced and not believable, to me. Fionn Whitehead as son Jackie (who, we find out, is an accomplice in the heist and a little more) and Matthew Goode as Kempton’s barrister in court are there to help showcase Mr. Bunton and his crusade.

This is Jim Broadbent’s movie and he becomes Kempton Bunton as he fights the fight for the little guy (including him) and will even do jail time for his ideals. His story, once the decision to steal is made, follows him through all the legal hurdles he must face. You have to admire the man’s tenacity and dedication to his fellow man.

Take the time, after you see “The Duke,” to do a bit of reading about the true story. Directed by Roger Michell (who passed away on 22 September 2021 after the film wrapped), with scripters Richard Bean and Clive Coleman, does take some license but overall, the filmmakers do a solid job in telling a true-life tale that no one heard about. Well, now you do and it is a good one for us seniors.