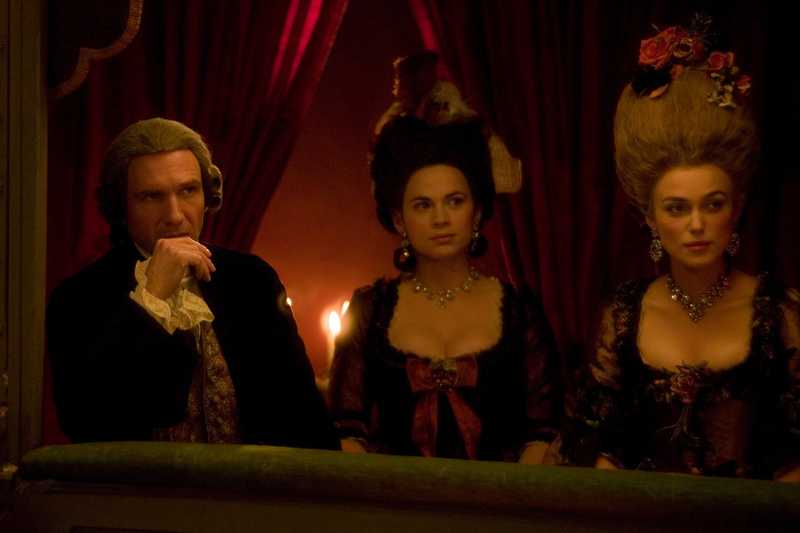 Lady Georgiana Spencer (Keira Knightley) is young, pretty, very smart and is betrothed, by her mother (Charlotte Rampling), to the taciturn Duke of Devonshire (Ralph Feinnes). He is little concerned about whom he marries as long as he is given a male heir. If Georgiana has a boy child, she will be set for life, but the volatile politics of the time awakens a political activism and passion in "The Duchess."

At sixteen, Georgiana Spencer (Keira Knightley, "Atonement") entered into marriage with the older, most prominent bachelor in England. She became popular with leaders of the day, a style icon known as the 'Empress of Fashion' and a tabloid favorite. She had to endure the well known fact of her husband's mistress, and, when she could not warm the chill in the marriage, had affairs of her own. She loved her children and mingled with the common people. She was born in 1757 and a great-many-times-over niece would be Princess Diana. She was "The Duchess." But, as adapted from the Amanda Foreman biography by Jeffrey Hatcher ("Stage Beauty"), Anders Thomas Jensen ("After the Wedding") and director Saul Dibb, one will only be exposed to Georgiana's greatest love affair with shallow dips into other aspects of her life. As it stands, "The Duchess" is a sumptuous period piece, well acted amidst stunning production design and costuming (Michael O'Connor, "Brick Lane," "Miss Pettigrew Lives for a Day," a seeming lock for an Oscar nomination). Here's hoping those intrigued by the film's heroine will be inspired to read "Georgiana, Duchess of Devonshire." The film begins in 1774. As Georgiana and friends make bets on young men, including future lover Charles Grey (Dominic Cooper, "Mamma Mia!"), in a faux horse race, her mother, Lady Spencer (Charlotte Rampling, "Swimming Pool"), is promoting her like a brood mare for stud to the Duke of Devonshire (Ralph Fiennes, "Harry Potter and the Order of the Phoenix," "In Bruges"). Georgiana is happy to be married to the Duke, but is left at sea by his ill manners and inability to converse. The Duke is happiest with his dogs and only wants an heir from her. And so Georgiana devotes herself to her duties, beginning with hosting dinners for Whig party members. Her forthright intellect makes her a favorite of Whig leader Charles Fox (Simon McBurney, "The Last King of Scotland," "The Golden Compass"). When presented with the Duke's illegitimate child Charlotte, Gee behaves like the girl's own mother, but the Duke isn't pleased when their first two children to survive are girls (Harryo and Little Gee). When Georgiana notes the Duke talking to a woman at a ball in Bath, she boldly befriends Bess Foster (Hayley Atwell, "Brideshead Revisited"), and, upon hearing of her difficulties, manipulates the Duke into allowing Bess to stay with them. This will be a curse and blessing as the Duke quickly takes Bess for a mistress and refuses to turn her out of their home. Bess, on the other hand, who has betrayed her friend in order to retain possession of her own children, secretly conspires to have Gee take on her own lover, Charles Grey, now a fiery Whig candidate. Dibb's film focuses on the marital discord and each of the partners' most prominent lover, turning Georgiana's tale into a bodice ripper laced with betrayals, politics and lots of highly constructed hair (Georgiana was the one who began the fashion for putting ornaments, like sailing ships, into elaborately structured wigs) and it is a fine effort in that regard. Women looking for a love story, a bold heroine suppressed by the mores of her day, will be more than satisfied. However, the story of the Duchess of Devonshire is so complex the subject seems better suited to a miniseries, perhaps a miniseries telling the parallel story of two Spencer women who shook their worlds, albeit 250 years apart. Keira Knightley does a fine job playing coltish hesitation, gaining confidence through praise and attention (conveyed with sparkling eyes and a sly smile), reined in again by her husband and mother. Knightley shows the Duchess's despair in a trio of scenes and etches each differently - a drunken daze (from which she is roused when her wig catches fire), a heartsick succumbing to reality and a mother's worst nightmare. The more experienced Fiennes (22 years Knightley's senior, vs. the real Duke's 9) gives a more intricate performance with a lot less to work with. He's infuriatingly taciturn, seemingly cruel or impassive, violent and unhappy and the actor and script hint that the Duke had his own trials to bear which Georgiana could not comprehend. They were a true mismatch. Support is solid, especially from Atwell who must walk a careful balance to maintain sympathy. "The Duchess" is beautiful to look at but loses its subject's intricacy beneath baubles and bathos.

Adapting the book by Amanda Foreman, director Saul Dibb, with his co-writers, Jeffrey Hatcher and Anders Thomas Jensen, creates a lavish, stunningly realized period story set at the end of the 18th century. The problem I have with "The Duchess" is that it only partly chronicles the exploits, private and public, of the Princess Diane-like Duchess of Devonshire. Beginning when Georgiana was 17 and betrothed to the Duke, the innocent young woman happily agrees to the fortuitous marriage. Soon, though, she learns that her aloof husband cares for her only as a vessel for his seed and, he presumes it is a done deal for him, a son. Georgiana, nine months later, gives birth to a beautiful baby girl. Later, pregnant again, Georgiana disappoints her impatient husband when another girl child is born. All the while, the randy, selfish Duke takes his pleasures with other women whenever he likes. Solace for the duchess arrives in the form of Lady Elizabeth 'Bess' Foster (Hayley Atwell) and the two women become fast friends. Bess is estranged, with her three sons, from her abusive husband and Georgiana convinces the Duke that her friend move into their palatial home. It turns into a bad idea, though, when Bess comes onto the aristocrat's lascivious radar. An open affair begins and a humiliated Georgiana begins drinking, gambling and becoming involved in the Whig party politics where she meets Charles Grey, a firebrand candidate for parliament. A romance ensues that allow Georgiana to accept her stilted home life. It is drinking, gambling and becoming involved in the Whig party politics that is the problem with "The Duchess." These human foibles are only alluded to throughout the film, tantalizing the viewer with a sketch of the beautiful socialite's public persona and activism. This, of course, is at a time when women's suffrage is still a long way off. I was intrigued by the story that Saul Dibb and company did not tell. Instead, we get a sumptuous bodice ripper that is beautiful to look at. Kiera Knightley dominates the screen, mainly because of her copious costumes and ever changing tall hair, but is overshadowed by the riveting performance Ralph Feinnes as John Spencer, the Duke of Devonshire. Feinnes is always interesting but he tops himself as a man so used to extreme wealth that he no longer sees beyond his own desires. Haley Atwell, as Bess, gives a layered, nuanced performance as the other woman and best friend to Georgiana. She is willing to make a cuckold of her friend but will fight tooth and claw to protect her from the Duke's wrath. The supporting cast, led by Dominic Cooper as Charles Grey, is richly populated and fully dimensioned. I have to commend the behind-the-camera folk for creating a look at the world of the fabulously wealthy British in the late 1700s. Kiera Knightley's beautiful and detailed costume and hair design are breathtaking, as are all the costumes designed by Michael O'Connor. Production design (Michael Carlin), art direction (Karen Wakefield), set decoration (Rebecca Alleway) and cinematography (Gyula Pados) are superb and Oscar-nomination worthy. The techs are what make "The Duchess" a most watchable film. Unfortunately. the screenplay is where it falls weak. This is definitely aimed at the mature femme audience. For an old guy like me, it fell short by not going into Georgiana's only-alluded-to political life outside her marriage.