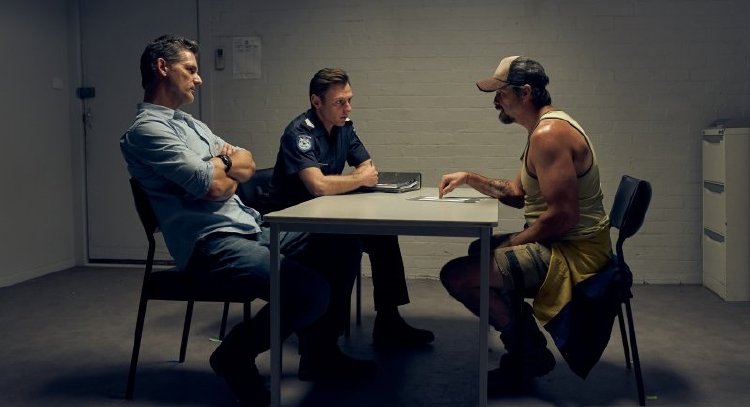 After 10 years of drought, the Australian town of Kiewarra has gone a bit mad, a possible explanation for why Luke Hadler (Martin Dingle Wall) committed suicide after killing his wife and son.  Returning for the first time in 20 years for the funeral of his childhood friend, Federal Agent Aaron Falk (Eric Bana) agrees to look into the case for Luke’s parents, but Kiewarra still has suspicions about his own possible involvement in the murder of 17-year-old Ellie Deacon (Bebe Bettencourt) all those years ago, before they became “The Dry.”

All set to sink into a good murder mystery?  How about ten of them?  Cowriter (with Harry Cripps, "Penguin Bloom")/director Robert Connolly’s adaptation of Jane Harper's novel is so over baked, so many of Kiewarra’s citizens criminals or liars of one form or another, that it is hard to care about any of them.  Connolly’s film has exactly two things going for it – its stunning and spatially intelligent use of its widescreen frame and Keir O'Donnell’s (“American Sniper”) thoughtfully nuanced portrayal of Kiewarra’s Sergeant Greg Raco.

Falk walks into such a hostile environment, his friend’s parents, Gerry and Barb Hadler (“Mad Max’s” helicopter pilot Bruce Spence and veteran actress Julia Blake), are heckled at their own son’s funeral while he himself is harassed by the same man, Grant Dow (Matt Nable), at the pub where he’s taken lodging.  Grant is the cousin of the girl whose murder remains unsolved and tends to hang around with her dad Mal (William Zappa), also belligerent.  The only people accepting of his presence are his old high school sweetheart Gretchen (Genevieve O'Reilly), now a single mom, and school Principal Scott Whitlam (John Polson).

Barb Hadler can’t believe her son would kill his wife and son (their baby girl was found still alive, wailing and dehydrated) and, implying distrust of the local investigation, asks Aaron to look into things.  Upon arrival at Luke’s house, he finds Sgt. Raco poking about in the garage.  Raco is young and inexperienced, but smart enough to recognize that and despite Barb’s misgivings, something about this case isn’t settling right with him either.  He’s suspicious of the fact that Karen Hadler was shot answering her front door (wouldn’t a husband just let himself in?) and concerned that ammo he’s found at the house is different from that used to commit the crime.  A local farmer, Jamie Sullivan (James Frecheville), claims Luke was with him shooting rabbits right before the crime (oddly, the same alibi Luke and Aaron had at the time of Ellie’s murder) and seemed upset with his wife.

As if all this weren’t enough (and there’s more), flashbacks begin to paint the complicated interrelationships among the young Aaron (Joe Klocek), Luke (Sam Corlett), Gretchen (Claude Scott-Mitchell) and Ellie and they’ve no sooner begun than it’s easy enough to figure out what happened to Ellie.  The exact opposite is true of the present day case, which is so convoluted it barely makes sense.

Connolly achieves a real sense of place, a vast, flat, straw-colored sprawl with a center that resembles a ghost town (flashbacks invariably take place at creeks and rivers which have since dried up).  “The Invisible Man” cinematographer Stefan Duscio contrasts horizontal and vertical spaces, making great use of the long hallways in homes whose layouts resemble railroad apartments.  But “The Dry” is a case of undue respect for its source material.  Some serious streamlining was in order, but as it stands it’s like watching an over plotted beach read overcompensating with A list production values.

Federal police officer Aaron Falk (Eric Bana) returns after 20 years to his small town of Kiewarra in the Australian outback to attend a multiple funeral of a childhood friend and his family. His visit is tarnished by this tragedy, by a decade of drought on the community region and the long-remembered death of his childhood friend Ellie (Bebe Bettencourt) in “The Dry.”

I try to go into a movie with an open mind and did so watching “The Dry,” directed by Robert Connolly and adapted by the director and Harry Cripps of the same-name novel by Jane Harper. If the adaption is true to its source material, I am glad I never read that material, even on a deserted island.

So, what is my problem with the film? Well, aside from the lackluster direction and acting – I never once sympathized with any character, except one – the story is not exactly compelling. A reason for this is there are no fewer than five main narration threads, going in different, convoluted directions, presented here. And, I did not give a hoot about any of them.

IFC Films opens “The Dry” in theaters and everywhere you rent movies on 5/21/21.