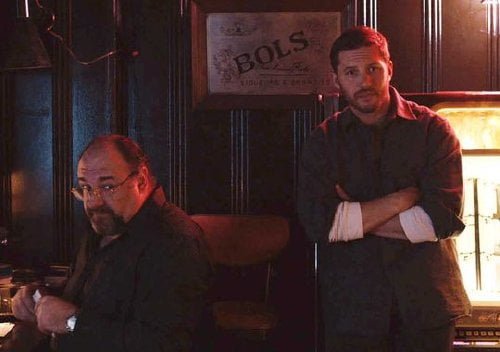 Bob Saginowski (Tom Hardy) is a Brooklyn bartender. Pressured by his boss and cousin, Marv (James Gandolfini), he gets embroiled in a robbery gone bad and the investigation that involves family, friends and enemies in the ‘hood after “The Drop.”

Bob Saginowski (Tom Hardy, "Locke") is a loner who bartends at the Brooklyn neighborhood joint that bears the moniker of the man who used to own it, his cousin Marv (James Gandolfini), who still runs it for Chechen gangster Chovka (Michael Aronov, TV's 'The Americans'). One night on his way home, he finds a beaten pit bull puppy in the trash can of Nadia (the original "Girl with the Dragon Tattoo," Noomi Rapace), who helps him clean it up and teaches him to care for it. Little Rocco gives Bob a new lease on life, but the puppy also pulls him back into a secret past that's mixed up with Marv's bar acting as an underground bank for dirty money when it's used as "The Drop." Many have cited screenwriter Dennis Lehane's (novelist "Mystic River") adaptation of his short story 'Animal Rescue' as slow moving but director Michaël R. Roskam ("Bullhead") has paced it just right, a character study of a man who's just like the little dog he rescues, a breed with a bad rap that's just looking for love and, in his case, perhaps redemption. Lehane's story is full of Catholic signals - Church attendance without Communion, broken angels - and Roskam signals his climatic twist early on for those who watch where cinematographer Nicolas Karakatsanis's ("Bullhead") camera lingers. Hardy, so great in this year's "Locke," spins a totally different but no less compelling character here, complete with a lived in Brooklyn accent. He's supported by the great Gandolfini, his last performance a parallel of Hardy's character arc. Marv's not happy with Bob's propensity to buy rounds and run a tab for down-at-her-heels regular Millie (Patricia Squire, Netflix's 'Orange is the New Black'), but he has a new ax to grind after the bar's robbed one night by two masked men. Bob tells the very observant Detective Torres (John Ortiz, "Silver Linings Playbook") that he noticed one of the men's watch had stopped. The duo get no sympathy from Chovka, who's heard about the Detective's visit but scoffs at Marv's efforts to get back his 5K. When we see Marv meet up with Rardy (Michael Esper, "Frances Ha"), we learn just how desperate he is trying to grab his last brass ring. The reappearance of that watch tells us maybe so has Chovka. Marv isn't the only one being circled. Eric Deeds (Matthias Schoenaerts, "Bullhead," "Rust and Bone," excellent), a scary seeming psychopath rumored to have murdered one of their own ten years back, stops Bob to admire his dog. Later he shows up at his house, claiming the dog is his and he has the pup's chip barcode registration. He demands $10K. Bob, who's tentatively been sidling up to Nadia, also learns Eric was her former abusive boyfriend. Torres also keeps poking about, the robbery having raised an itch about that long ago murder. Roskam achieves the tension of a noose tightening with a series of small tells - a man asking for directions, an umbrella hanging on a crate, Marv's inconvenient sick day on Superbowl Sunday - the whole builds to a shocking crescendo that upon reflection we realize has been signposted all along. The production is steeped in a transitional Brooklyn melting pot of houses barricaded with old aluminum meshed fences, weary Christmas decorations and tired basement rec rooms. Marv's sister Dottie (Ann Dowd, Showtime's 'Masters of Sex,' HBO's 'The Leftovers') embodies the broken dreams of the working class. And yet, rays of light shine through, from the adorable pup to Bob's kind heart. "The Drop" is about secrets and lies, none of its primary players who they initially seem on the surface, even Eric. But it's Hardy's incredibly moving performance that lingers most of all. Grade: