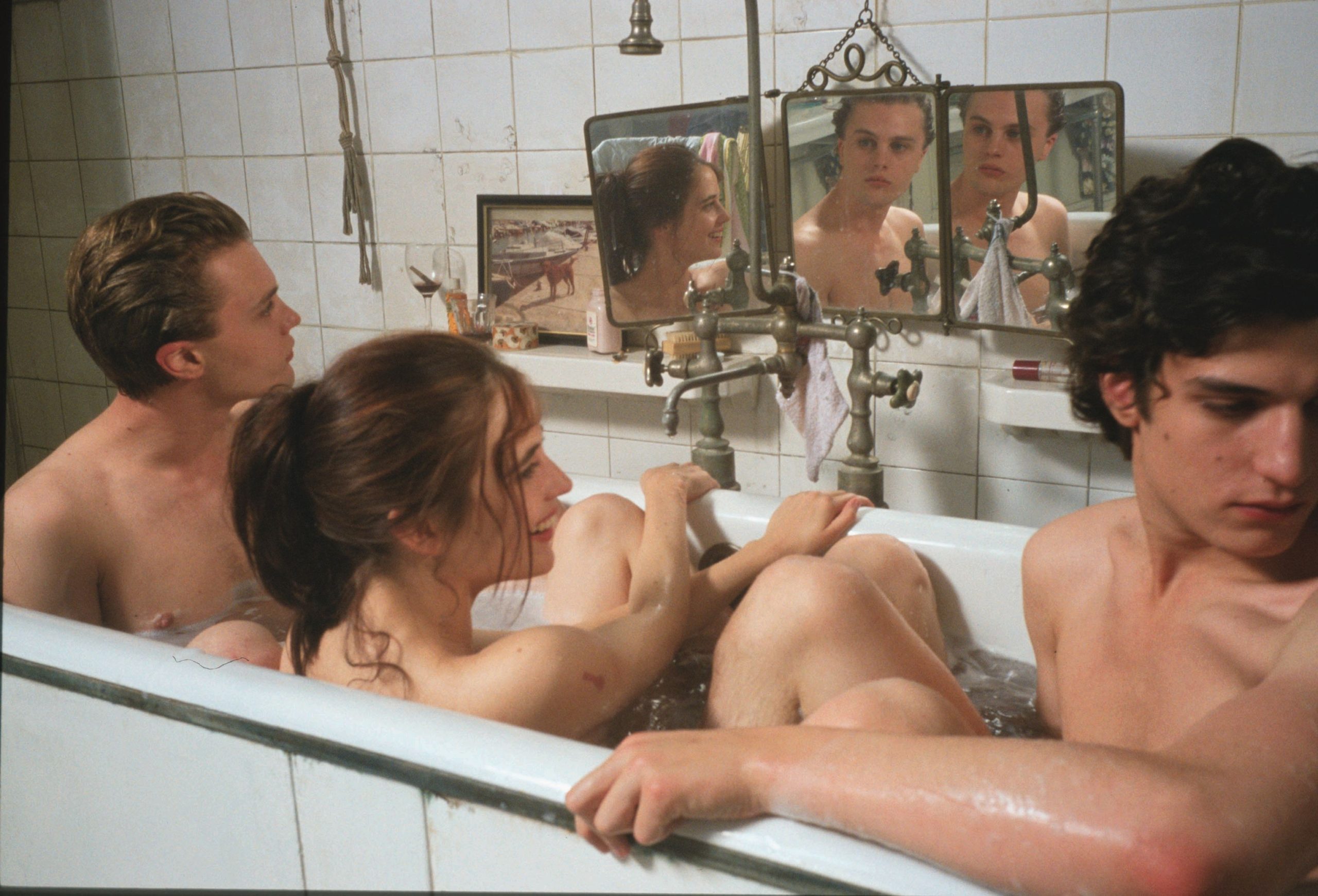 Robin: Bernardo Bertolucci’s “The Dreamers” is two films in one. One is a brilliant homage to French films and American musicals, with excerpts from classic cinematic moments that the filmmaker lovingly recreates with his stars. Best of these recreations are the race through the Louvre in Jean Luc Godard’s 1964 film “Bande A Parte” and the obligatory scenes from his classic “A Bout de Souffle (Breathless).” Unfortunately, this is the short portion of the evening’s entertainment as the creator of “The Dreamers” presents his most sexually controversial film since his 1973 X-rated “Last Tango in Paris.” Isabelle (Eva Green) and her twin brother Theo (Louis Garrel) take a liking to fellow film buff, Matthew (Michael Pitt), and invite him to their home for dinner. Their liberal intellectual parents are leaving for a vacation by the sea and the siblings invite their new friend to move in with them. The trio sequester themselves in the apartment, awaking their sexuality and uncovering hidden emotions. Meanwhile, in the street below, it is May of 1968 and the students and workers of France’s capital are about to go to the barricades in their fight for justice against the fascist police. Unfortunately, the dynamics of these earth shaking events are handled in a perfunctory manner as the film concentrates on the debauched excess of the three friends: Isabelle and Theo carry on a chastely incestuous relationship; Isabelle seduces Matthew into ending her virginity; they eat and drink everything in sight, even going through garbage; they take a lot of baths, in varying configurations; and, the twins do what they can to shock their naïve American friend. I would rather a story that followed the rioters. The decadence of these youngsters, with their total lack of social conscience, makes the final moments of “The Dreamers” seem based on a whim as Matthew stands up for his pacifism while his friend turn instant revolutionaries. While watching “The Dreamers” I could not get over how much Michael Pitt is made up to look like Leonardo Di Caprio. It is almost like Bertolucci was obsessed with casting the mega-star and could not. Instead, he appears to do the next best thing and make Pitt into Leo’s image. I never embraced any of the three characters and thought them the indulged, selfish (and slovenly) children of intellectual liberals. I would love to cut all the marvelous film references and footage into a single montage. It would prove the best thing from the film. I’m disappointed by master Bertolucci and give it a C+.

Bernardo Bertolucci’s tale of the friendship between an American cinephile, Matthew (Michael Pitt, "Murder by Numbers"), and movie mad French twins Isabelle (newcomer Eva Green) and Theo (Louis Garrel), begins with the event that many consider the start of the student riots of '68 in Paris - the firing of Henri Langlois, director of the Cinematheque Française. 'Only the French would have a cinema inside a palace,' observes Matthew (a questionable sentiment considering that the U.S. built 'movie palaces'). Love of cinema is beautifully stated as Bertolucci shows Pitt crowded amongst other young people, the black and white images of a Nicholas Ray film flickering over their rapt faces. Matthew joins the crowds protesting Langlois's removal (a protest that proved successful - he was reinstated) and is struck by a young woman who has chained herself to a fence, looking like one of his screen idols. Isabelle latches on to the young American and invites him home for dinner with their parents, George (Robin Renucci), a well known author, and Bohemian intellectual mother (Anna Chancellor, "What a Girl Wants"). When George challenges Matthew for not listening to his ramblings, Matthew turns tables, giving a witty discourse on the cosmic harmony of his cigarette lighter with the patterns of their tablecloth, cementing his reputation with the twins. Their parents departing for the country for the entire summer, Isabelle and Theo invite Matthew to quit his shabby hotel and move in with them. Matthew is overwhelmed. The straight arrow American is thrown off guard immediately with the twin's casual regard for nudity, sharing the bathroom, and even more alarmingly, their bed. Simple games of cinema trivia take a bizarre 'truth or dare' twist when Theo fails Isabelle's challenge and she doles out a 'punishment' of masturbation which he dutifully fulfills. Matthew is put on the spot when Theo demands that he sleep with his sister, which Matthew does, on the kitchen floor while Theo fries eggs. Soon the threesome are sharing baths, but the decadent lifestyle and borderline incestuous nature of the twins' relationship forces Matthew to attempt to restore some kind of order. He asks Isabelle out on a date. "The Dreamers" shown at the San Sebastian film festival was, of course, the original version, which will be cut by some 2-3 minutes for its American release (Fox Searchlight has since reversed this decision and will release the film as NC-17). The attendant hoopla this is sure to attract will be good publicity for a rather stupid film which will lose little attaining its 'R' rating. "The Dreamers" must be given credit for its homage to cinema, which is quite masterfully accomplished, with finely tuned editing by Jacopo Quadri. Isabelle throws down a challenge that the trio best the 9 minute record of running through the Louvre accomplished in Godard's "Bande A Part," and as they do the earlier race being duplicated is intercut with the present. Then Isabelle and Theo chant the line from Browning's "Freaks," 'We accept him,' all the way home. In a visually witty bit, Isabelle swoons about Matthew's bedroom in tandem with Garbo in "Queen Christina." Garbo's rapturous grasping of a phallic bedpost is hilarious in the new montage. The film's problem is that its French twins are simply unlikable, the spoiled, self-obsessed children of wealthy intellectuals who live in irresponsible squalor. The '68 riot backdrop is completely absent through the main section of the film, where the three cavort in an apartment that may as well be hermetically sealed from the world. (When the riots are introduced at the film's end, they only serve as a fashionable bandwagon for Isabelle and Theo to jump upon.) It's odd that in Bertolucci's return to 'French' cinema, it is only the American character that has any smarts! (This is further delineated by the sides Matthew takes against Theo debating the merits of Keaton vs. Chaplin and Hendrix vs. Clapton.) Michael Pitt seems like a substitute for Leonardo DiCaprio in this film. Looking like James Dean crossed with McCauley Culkin, Pitt softly mumbles his way through. Green has a vivacious quality and Garrel spins an appropriate brood, but the two are saddled with characters who act years younger than their age. Jean Rabasse's production design is the true star of the film. The fabulous layout of the Parisian apartment, where characters can gaze upon each other from rooms separated by an interior courtyard, is more fabulous than its inhabitants. Brilliantly referenced cinema history paired with a ridiculous central story make "The Dreamers" a wash.