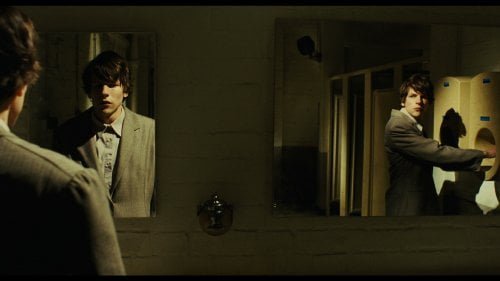 Simon James (Jesse Eisenberg) lives a life disregarded by his mother (Phyllis Somerville, "Little Children"), his work colleagues and the copy girl, Hannah (Mia Wasikowska, "Only Lovers Left Alive"), he wishes he could know better. He's even marked as a potential suicide by police investigating the one that happened in the apartment directly across from his (the man waved before he jumped). Then a new coworker, James Simon, changes everything, at first for the better. But things get increasingly darker for Simon as he wrestles with "The Double."

Writer/director Richard Ayoade ("Submarine") adapts the Dostoevsky novel about a low level government bureaucrat whose life is taken over by a man who looks exactly like him but has all the characteristics for success that he lacks. Set in a dystopian London of underground cube farms, block house apartments depressing cafes and dingy alleys, Ayoade's sophomore film plays a lot like a murky, schizophrenic version of Terry Gilliam's "Brazil." One cannot help but feel for the hapless Simon, who can't even sit in an empty subway car without being told to move by a stranger and whose most frequent conversational response is 'Sorry.' He's harassed daily by the office security guard (Kobna Holdbrook-Smith), his boss Mr. Papadopoulos (Wallace Shawn, "The Princess Bride") calls him Stanley and brushes past his revolutionary ideas and the waitress (Cathy Moriarty, "Raging Bull") at his local haunt is always rude. His mother, whose care is bleeding him financially, things he hasn't amounted to anything. Simon spends his evenings observing Hannah from the telescope in his studio and retrieving the artwork she throws down the rubbish chute. When James Simon is introduced in the office, Simon's beside himself that no one seems to notice they're exact twins. When he asks Harris (Noah Taylor, "Shine") about it directly, the man admits there's a resemblance, but says he hadn't noticed as Simon's a bit of a non-person. Simon leaves with James and is astonished by his handling of Kiki the waitress (in an homage to "Five Easy Pieces'" diner scene). He pours out his heart, saying that he feels like Pinocchio - not a real boy. James promises to help Simon woo Hannah, but he also asks him to take an office profile test and do his work. Before Simon knows what's hit him, James is tagged the office shooting star, getting face time with The Colonel (James Fox, "Performance") due to Simon's analytics, with Hannah's swooning over him ('he told me he felt like Pinocchio') as he also plays Papadopoulos' daughter Melanie (Yasmin Paige, "Submarine"), the better to blackmail Simon to keep his mouth shut. Eisenberg's terrific handling two sides of what is essentially the same coin, one with the intellect but not the socials kills, the other an ambitious glad hander. In essence, he's wrestling with himself. There are frequent nods to China, a reference to the old adage about digging to the other side of the world. Depression and suicide are consistent themes, Simon being told by more than one woman that he should consider the latter (ironically, this works out in his favor). In addition to the expected mirrors, Ayoade's production is full of retro ducts, dials and dated displays, an industrial thrum underlying all. But the film, which intrigues with its deadpan whimsy, trails off as it should be hitting its stride, Simon's ultimate control grab lacking in substantive payoff. Watch for cameos from "Submarine-ers" Paddy Considine, Sally Hawkins and Craig Roberts.