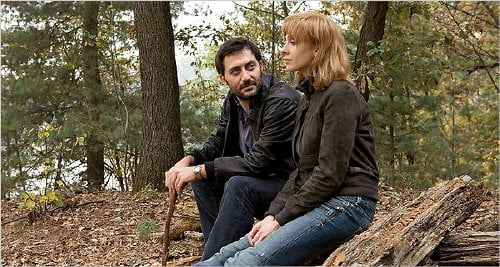 Hotel chambermaid Sonia (Ksenia Rappoport, "The Unknown Woman") goes to a speed dating event in Turin and meets security guard/sound engineer Guido (Filippo Timi, "Vincere"). They have an instant spark but on their first date Sonia says she must go home for an early start the next day. The time? 23:23. Guido laughs, saying it was once an in joke in another relationship and that one should make a wish at "The Double Hour."

Director Giuseppe Capotondi ("Solomon Island") makes his feature debut with a twisty genre thriller from the writers of the Italian version of 'In Treatment,' that, like its title is split into two points of view. The film plays better during its first half, when everything keeps folding in upon itself, Sonia's world seeming to exist on parallel planes. It's so intriguing that when we start to see things through Guido's eyes, the reality seems a bit of a cheat, but it's an entertaining, well acted ride nonetheless. We first see Sonia at work, invited into an occupied room by a young woman. Sonia is clearly uneasy and heads into the bathroom, pinning up her hair before beginning to work. 'You look better with your hair down' the guest tells her from the doorway. A few seconds later, Sonia hears a loud thump. The window is open and the woman lies smashed on the pavement below. Guido drives her to the rural estate which he's responsible for, but after deactivating the security system, they're attacked outside by masked invaders, one of whom, Riccardo (Gaetano Bruno), grapples with Guido. A shot is fired. Back at the hotel, Sonia accidentally breaks a bottle of expensive cologne in another room. The hotel deputy director (Lorenzo Gioielli, "Demons 2," "Il Divo") is kind about the mishap, even though the customer is abusive. Another hotel employee, Bruno (Fausto Russo Alesi, "Vincere"), uses the incident to vaguely threaten Sonia. We're still wondering just what happened. Then we see Sonia visit Guido's grave. In the film's best, most eerie scene, Sonia is in the tub. For the second time, she hears a distant tune (The Cure's In Between Days, a bit goofy in its context here), one that was playing in Guido's car. Ducking her head under the water, it becomes clearer, but a loud bang startles her. Then her phone rings - it's a cop, Dante (Michele Di Mauro), suggesting the coincidence of Guido's having deactivated the alarm just before the robbery is suspicious. The scene, the film's continuous use of bathrooms and Sonia's hallucinatory (or are they?) visions of Guido are reminiscent of "Diabolique," in which a woman's 'dead' husband comes back to life in a bathtub. And then everything changes, Sonia emerging again as if from her bathwater after being drugged by Bruno and buried alive. There are plenty of other mysteries, such as why the woman who committed suicide is apparently her hotel coworker Margherita (Antonia Truppo), who happens to be dating a hospital security guard. Or why Marisa (Lucia Poli), the organizer of the speed dating event has told Guido that Sonia actively sought him out that night when we saw a disillusioned woman about to give up on her prospects. There is also a photograph of her and Guido in Buenos Aires that Dante has given her, although she tells Margherita they were never there. Rappoport's performance is tinged with anxious melancholy, which works beautifully in the filmmakers' scheme. Capotondi refracts Sonia's experience through different states of consciousness (or madness?), using mirrors to 'double' her, but after creating a weird sense of dread (wonderful use of sound) he comes in for a soft landing. Too many of the film's curiosities are explained away with a cliched device, but Capotondi has created an unsettling mood which creeps beneath the skin.