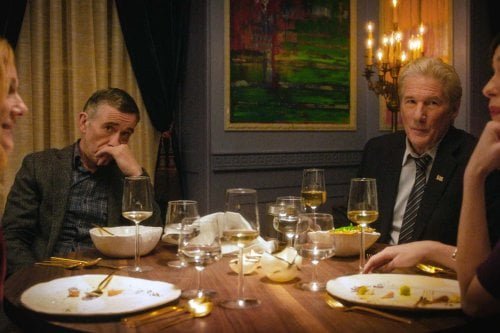 When his popular gubernatorial candidate brother Stan (Richard Gere) invites he and his wife Claire (Laura Linney) to an exclusive restaurant they could never afford, Paul (Steve Coogan), who resents his brother's success, is wary of his motive. Claire is excited about the fancy night out. At the onset Stan and his wife Katelyn (Rebecca Hall) seem strained and Paul is in attack mode, but it is those who are not there, their sixteen year-old sons, who are Stan's reason for the invite and each must weigh parental protectiveness against ethics during "The Dinner."

Writer/director Oren Moverman ("The Messenger") is the third to adapt Herman Koch's 2009 novel but it doesn't prove the charm (a 2013 adaptation was made in Koch's native Netherlands, an Italian version in 2014). Jumping about in time from the dinner to Paul's perspective on the past and the evening in question with amateurish dissolves, "The Dinner" might keep you guessing but the road to the answer is arduous. Two couples who meet to discuss the actions of their children while revealing more about themselves is a concept first spun successfully by playwright Yasmina Reza, whose "God of Carnage" was originally staged in London in 2008, adapted for the 2011 film "Carnage" by Roman Polanski. Although their are similarities between the two, "The Dinner" gives us a false narrator in Paul. It is through his perspective that we meet everyone and that perspective condemns Stan Lohman. What we learn as the story progresses is increasingly shocking in ways both expected and not, but Moverman, who so artfully skipped about in his "Love & Mercy" screenplay (also credited to Michael A. Lerner) drains the film's momentum with his scattershot approach. Prefaced with opening credits that suggest the horror genre, then introducing his three character groups before chaptering into dinner courses that do little but aggravate Paul's pretentiousness aversion, the film features little in the way of discussion among its four principals. The Lohmans have a difficult time staying at their table, beginning with Stan's insistence that the party be moved after Paul and Claire are seated. Stan's continually interrupted by his aide Nina (Adepero Oduye), Claire follows the upset Katelyn outside, Paul takes a call from Michael (Charlie Plummer) who is looking for the phone his father just answered. The horrific video at the heart of the matter, publicly broadcast, is on Michael's phone although just who shot it is a never-solved mystery, both protagonists seen if not identifiable (we later see Michael recording the incident, either an indication of poor editing or haphazard story telling). A long segue to a fraternal trip to Gettysburg is a metaphor lost amidst too much clutter. Moverman's wrap, which should pack a real wallop, instead features four actors in search of a scene to play. That none of these four actors (the film also stars Chloe Sevigny in flashbacks as Stan's first wife and the mother of Rick (Seamus Davey-Fitzpatrick) and adopted son Beau (Miles J. Harvey)) ever convince as real people may be due to the fractured nature of the film. It is telling that the film's best performances comes from Michael Chernus ("Mistress America"), the restaurants maitre 'd and group referee cum therapist. Of the three boys who catalyze the action, only Plummer gets any definition, a shame given the importance of Harvey to Paul's psychological history. "The Dinner" has a few moments where what could have been shines through, but Moverman's attempt to get us into Paul's mental state is more tiring than illuminating. Grade: