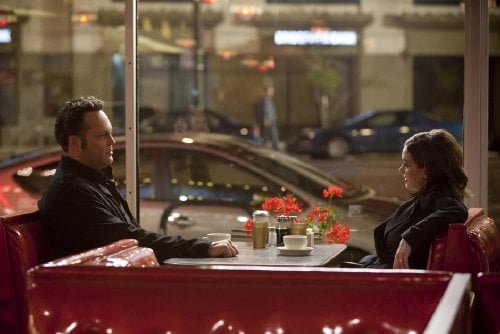 Nick Brannen (Kevin James) is a brilliant engineer, but ever since his shy college days, he's depended on business partner and super salesman Ronny Valentine (Vince Vaughn). When Ronny gets them a shot at a deal with Dodge, Nick's under the gun to produce a macho muscle car experience for their new electric line. So when Ronny's out scouting a romantic location to pop the question to his girlfriend Beth (Jennifer Connelly, "A Beautiful Mind") and sees Nick's wife Geneva (Winona Ryder, "Black Swan") making out with a young tattooed stud, he's got quite "The Dilemma."

A few months back, director Ron Howard started catching flack with GLAAD when trailers for his newest film included Vince Vaughn calling a car 'gay.' He better be prepared for heavy artillery fire when people actually see the whole movie. This painfully unfunny slog, written by Allan Loeb ("Things We Lost in the Fire"), is easily the low point of Howard's career. Besides Jennifer Connelly's confident style, the *only* good thing in this film is - shocker of shockers - Channing Tatum ("Public Enemies," "Dear John") as Geneva's tattooed boy toy Zip. He comes across as a decent dumbbell whose love of his tropical fish is like a cross between Kline and Palin in "A Fish Called Wanda." So, why doesn't Ronny clue Nick in? Because his friend is already suffering anxiety attacks over a project that could make or break their fledgling company. So he takes the obvious other path and approaches Geneva. But Geneva's character is so horribly written that all she does is make counter charges and denials and Winona Ryder is simply awful in the role, unable to deliver any sympathy for the character. Maybe that's why the filmmakers eventually just drop her character near film's end with no mention of her fate. (Considering that Natalie Portman is opening in a film next week costarring Ashton Kutcher that the studio isn't screening in time for most deadlines, Fox Searchlight must be sweating bullets over their "Black Swan" Oscar campaign.) Loeb's script makes all the obvious moves when it's not making ill conceived ones. Ronny gets so tied up in lies, he ends up looking like a guilty party. We learn he used to have a gambling problem and Beth gets so concerned over his inexplicable behavior she eventually calls an intervention. And yet, except for Ronny's run in with Zip, there's nothing remotely humorous about any of it. Why would Ronny confide in strangers for advice, yet not discuss the problem with the woman he loves? Ronny learns that part of what Geneva has told him about her marriage is true, but we never learn why the schlubby Nick would forgo sex with his still hot wife in favor of an Asian massage parlor which seemingly only hires seniors. There may have been a decent buddy comedy if the filmmakers had just stuck to the opposite personalities of its male protagonists and how that affects their business partnership, but they even manage to muddy these waters with the introduction of Susan Warner, a Dodge consultant played by Queen Latifah who likes to use raunchy male sex metaphors. This is so cringe inducing the filmmakers feel the need to have Ronny bring up his character's initial discomfort with them, but he can't sell us on his late appreciation. Queen Latifah is such a likeable screen presence that she makes mediocre material seem better than it is. Not here. Besides lucking out with Tatum's charming cluelessness, about the only thing Howard's done right with "The Dilemma" is use his Chicago locations well (although wouldn't these guys more naturally reside in Detroit?). After 1986's "Gung Ho" and now this, maybe Howard should steer well clear of anything to do with the auto industry.