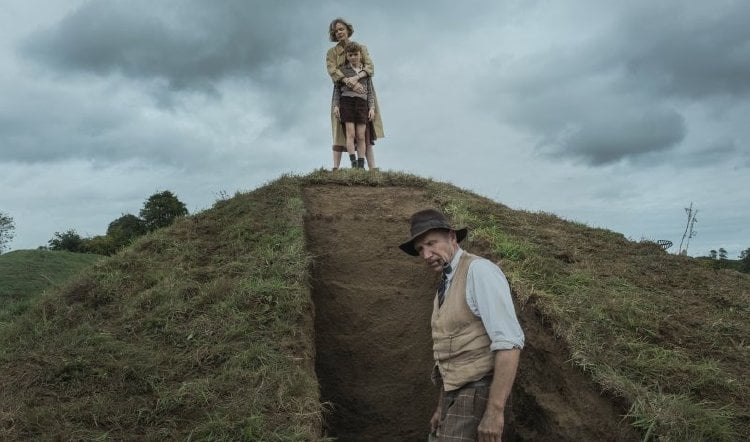 As the storm clouds of a world war gather, the widow of a colonel, Edith Pretty (Carey Mulligan), engages ‘excavator’ Basil Brown (Ralph Fiennes) from the local Ipswich Museum to investigate the mounds on the grounds of her Sutton Hoo estate on the River Debin.  The two amateur archaeologists will uncover one of the greatest finds of the twentieth century in “The Dig.”

John Preston's novel based on a true story, adapted here by Moira Buffini (TV's 'Harlots'), uses the events surrounding what has been called the ‘British Tutankhamun’ as a reflection on the evolving cycle of humankind by accentuating sex and death.  This well mounted period piece features a well cast ensemble of emerging and veteran stars and character actors in what might be considered a top notch ‘Masterpiece’ production.  Director Simon Stone ("The Daughter") keeps us engaged while larding his tale with contrasts in class, power and ethics.

It always takes me aback to see Fiennes playing a blue collar character, yet he disappears into the humble, self educated soil expert with better instincts than the British Museum’s overbearing Charles Phillips (Ken Stott, "The Hobbit" series).  We learn he isn’t even valued as much as he should be by the local Ipswich Museum when he rejects Mrs. Pretty’s offer of his current wage (quickly rectified).

Edith, who dresses formally for lone dinners attended by a white gloved servant, is quickly attracted to the commoner by his kindness and vast array of knowledge.  Her young son Robert (Archie Barnes)    adopts him as a father figure.  But the woman whom we quickly surmise has a serious heart problem is set to have it broken when Basil’s wife May (Monica Dolan, "Eye in the Sky") arrives unexpectedly on the very day Edith had invited him to join her for dinner.  May is disappointed to see that her husband hasn’t read any of her letters and refuses to stay the night, an unvoiced sadness between them perhaps attributable to their childlessness, but she will prove an important supporting player in Basil’s history.

The dig itself is an ever evolving source of excitement.  Having cut a trench through what they presume to be a burial mound, Basil warns Mrs. Pretty it isn’t safe without supports any longer only to have it collapse on him himself, initiating a life and death dig capped with Edith performing mouth to mouth.  Small pieces are found which lead Basil to declare it Anglo Saxon, a history changing event if true, and then a ship.  Soon a team from the British Museum descends led by Phillips and infighting for control begins along with another couple of illicit romances, the honeymooning Stuart Piggott (Ben Chaplin) clearly more enamored by colleague John Brailsford (Eamon Farren, 'Twin Peaks'' Richard Horne) than his frustrated wife (and fellow archaeologist) Peggy (Lily James), who finds comfort with Edith’s dashing cousin Rory Lomax (Johnny Flynn, "Emma."), called in to assist before being called up as an RAF pilot.

The screenplay’s themes of past, present and future lives can be seen in Rory’s character.  Young Robert runs about in a homemade aviator helmet emulating his dad.  Then an RAF plane on a sophomore training run crash lands on the estate, its dead pilot pulled from the river by Lomax. A little more heavy handed is the film’s fantastical conclusion, a bit of Peter Pan whimsy that at least is beautifully realized (cinematographer Mike Eley’s long shots of Sutton Hoo’s fields recall Claude Monet’s haystacks series and his variety of camera heights accentuate characters’ relationships to events).   While the film has clearly taken leeway with facts (the real Edith was in her late fifties during events depicted here; Peggy Piggott is uncommonly insightful about homosexuality for the time), it ends with title credits assuring us that Basil Brown’s contribution to archaeology, under attack throughout the film, has been restored in recent years.

Emily Pretty (Carrie Mulligan), the wealthy landowner of the Sutton Hoo estate in Sussex England with some 18 interesting mounds on the property. She hires professional “excavator” Basil Brown to uncover the site in what would be the fabulous and historic archaeological discovery of an ancient ship, the grave of a king, in “The Dig.”

Director Simon Stone, with scripter Moira Buffini, adapts John Preston’s 2007 novel with the result a mix of historical fact and fiction. The principle characters and the story of the incredible discover give the film it primary focus – the titular dig and the dynamics of the relationship between the lady and her digger.

Carrie Mulligan lends her natural grace and bearing to make the frail Mrs. Pretty a dynamic force behind the excavation. When the authorities of the British Museum try to take over the dig from Mr. Brown, the strong-willed Edith will not tolerate the intrusion. Mulligan gives widow and mother Edith Pretty a strength that belies the character’s ebbing health and exemplifies her determination to side with Basil.

Ralph Fiennes plays against his usual type and infuses his Basil Brown with a working class sensibility and the knowledge needed to fulfill Edith dreams. That the excavator discovers, at the command and hire of the lady, a sixth century Anglo Saxon ship that was the burial site of a king. Fiennes fully embraces the down-to-earth nature of the self-educated archaeologist.

Another character, tantalizingly developed through the story, is the careful and detailed uncovering of the full size boat, a king’s resting place. As you watch the human relations unfold, you also see the progress of the dig in a deliberately careful unveiling. And, all through the excavation little pieces of the whole ship are shown, making me feel like a participant – but without the dirty fingernails.

Of course, once I learned about this historic find, through the detailed attention of the filmmakers, I had to do my diligence and learn more. It is a good story that I am glad to be told.