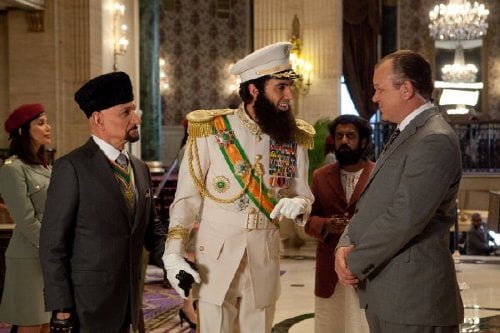 General Aladeen (Sacha Baron Cohen) has been the pampered tyrant of Wadiya since he was a child and the rightful heir to the throne, his Uncle Tamir (Baron Cohen's "Hugo" costar Ben Kingsley), was passed over. He collects paid celebrity sleepovers, orders executions for the slightest provocation and doubles down on protecting himself with lookalike doubles and an all female virgin guard. His persistence in developing a nuclear weapon along with his avowed hatred of Israel put him on target to either address the UN in person or face preemptive strikes, so he heads for New York City and is shocked to find himself left homeless when his Uncle orders his death and puppets a lookalike goatherd as "The Dictator."

Sacha Baron Cohen hit a home run moving his style of anti-PC ambush humor from British television's 'Da Ali G Show,' to the big screen with "Borat," a movie that at first incensed, then later proved a tourism boon to his fictional character's home country of Kazakhstan. His followup, based on another Ali G character Brüno, used the same schtick with vastly diminished returns. For his third starring vehicle, Baron Cohen's ditched his real-life guerilla attack routine but continues to embrace the same outrageous humor for a film that, while looking a lot like the dark side of Eddie Murphy's "Coming to America," is consistently funny on multiple levels and chock full of comic cameos. The film scores a laugh even before Paramount's logo appears with a memorial tribute, then jumps into a manically edited prologue giving us Aladeen's history where words tend not to match visuals (upon hearing that his mother 'died in childbirth,' we're treated to a post-childbirth scene with a struggling woman is being smothered with a pillow). Today Aladeen is a man in an outlandish military uniform with a 'luxuriant' beard and rolling R's who orders executions with a flippant two finger gesture and who plays Wii with a game featuring an animation of himself beheading infidels and partaking in raids on the Munich Olympics. Having endured a hilarious torture session with an 'Arab hating' American (John C. Reilly), Aladeen shows up at the UN having been shorn of his beard and torched of his clothes and is mistaken for a Wadiyan dissident by Zoey (Anna Faris, "What's Your Number?"), a Brooklyn organic grocer Aladeen mistakes for a 14 year-old boy. Zoey, who employs unfortunates from around the globe, tries to help Aladeen, but is shocked by his racist comments and randy come-ons. Meanwhile, Aladeen heads to New York's only Wadiyan restaurant, Death to Aladeen, and spies Nadal (Jason Mantzoukas, HBO's 'Enlightened'), the nuclear expert he believe he had executed, working in an Apple Store. Generously, given the circumstances, Nadal agrees to help his former dictator to achieve the nuclear goals that were cut short. Baron Cohen engages in everything from crass sexual jokes (including a close up of his penis presented to Marcia Debonis as a hotel guest looking out a window) to racial stereotypes to pointed criticism of U.S. democracy. A bit he does with Mantzoukas on a helicopter tour, where American tourists ("The Lucky One's" Adam LeFevre and '30 Rock's' Marceline Hugot) only understand the repeated words 'Bin Laden' (Aladeen's unwanted house guest) and '911' (the model of Porsche he enjoys), is side splitting, because Baron Cohen plays on post 9/11 fears rather than 9/11 itself. He takes aim at celebrities who shill themselves to questionable buyers for cash (Megan Fox and Edward Norton(!) prove themselves good sports, although others on Aladeen's 'wall of shame' may not be once they see this) and at news casters who interpret events to suit their own agenda (featuring a great running gag where Aladeen cops aliases from convenient signage). Not everything works - a romantic signpost is incorporated into a labor scene featuring "Step Brothers" costars Kathryn Hahn and Seth Morris from the unborn's POV and a corpse's head severed to harvest its beard outstays its welcome - but Baron Cohen hits way more than he misses. Misogyny has rarely been this funny although late breaking news of Zoey's heritage almost upends the film's finale. In a short cropped brunette wig that makes her look like a street urchin, Anna Farris employs her wide-eyed sweetly comic earnestness to the role of Zoey and makes a surprisingly good foil for Baron Cohen, who towers over her. Kingsley, who is often pictured holding his 'nephew's' hand, seems to be having fun. John C. Reilly is great as a torturer frustrated by his victim's constant oneupmanship. The film includes small roles, many uncredited, for Kevin Corrigan, Chris Parnell, Garry Shandling, Chris Elliott, Fred Melamed, Joey Slotnick, Fred Armisen and J.B. Smoove. Like Baron Cohen's first two films, this one was directed by Larry Charles and written by his 'Seinfeld' and 'Curb Your Enthusiasm' colleagues Alec Berg, David Mandel & Jeff Schaffer along with Baron Cohen. But even though Baron Cohen shifted his schtick a bit with this one, this group needs to find a completely new path for his next. The shock and awe foreigner persona has his trilogy.