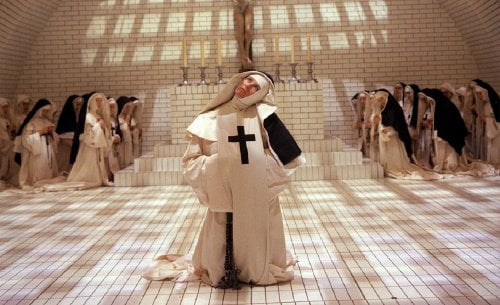 In 1643, Cardinal Richelieu (Christopher Logue), in a bid for his own power, urged Louis XIII (Graham Armitage, "The Boy Friend") to destroy the fortifications of French towns to keep Protestants from uprising. Louis agreed except for the town of Loudon because of a promise he'd made to its recently deceased governor. Richelieu's power grab was bolstered when the hunchbacked Mother Superior of Loudon's Ursuline convent, Sister Jeanne (Vanessa Redgrave), made wild accusations against the town's acting governor, Father Grandier (Oliver Reed), a man she was sexually obsessed with, in Ken Russell's notorious 1971 film "The Devils." The Harvard Film Archive's Furious Cinema '70-'77 series is an outstanding program of 35 mm prints of some of the most searing films of that era, including a rare showing of the restored version of "The Devils," a film that its distributor, Warner Brothers, has made difficult to see. The film, which features torture, Sister Jeanne's blasphemous fantasies and nude nuns engaged in an orgy culminating with their rape of a giant statue of Christ crucified (a sequence cut from the original U.S. release of the film) has been surrounded by controversy even before it was even released. Decades later, Russell's film is rightly considered a masterpiece. Adapted from Aldous Huxley's nonfiction work 'The Devils of Loudon,' Russell's ("Women in Love," "The Lair of the White Worm") movie is full of the over the top, sexually explicit type of imagery the filmmaker is well known for but it is very clear that his intent was an indictment of religious hysteria and fascism. Russell uses lots of cross cutting here - Sister Jeanne flagellating herself as Grandier weds himself to Madeleine De Brou ("Bridget Jones's mum, Gemma Jones), Grandier performing Mass by the side of the road as the nuns cavort - to contrast depravity with spirituality. Grandier himself was a controversial figure, a vain man who took lovers, but his fight to save Loudon was his redemption. Reed is fabulous here, preening and erotic, but also spiritually resolved when the tide turns against him, refusing to confess to the charges brought by the King's emissary, Baron De Laubardemont (Dudley Sutton, "Orlando"), and his witchhunter Father Barre (Michael Gothard, "For Your Eyes Only"). He endured unimaginable torture and, eventually, was burned alive in Loudon's town square. Redgrave gives a tortured, somewhat mad performance (that unhinged laugh!) as the disfigured but beautiful woman banished to a life of rigid ritual. As Jeanne herself notes in the film, most women who became nuns did so because they were unmarriageable, making a convent full of sexually repressed women ripe for the sort of political maneuvering that goes on here. When Jeanne requests Grandier as the convent's confessor and he instead sends Father Mignon (Murray Melvin, "Barry Lyndon"), she lashes out, calling him an incubus who steals into her room at night to ravish her. A horrific exorcism, attended by tourists from all around Russell's filmmaking team included future director Derek Jarman ("Caravaggio," "Edward II"), whose production design looks like a Kubrickian reimagining of the 17th century with white tiles and black columns. It is further brought to life by Russell with its plague ridden denizens and the corrupt surgeon and chemist who profit with their horrific 'treatments' (Grandier throws them out of a sick room like Christ banishing the money lenders). Modern experimental classical composer Sir Peter Maxwell Davies created a cacophonous score that sounds like an orchestra tuning up before evolving into something darker and more disturbing, perfectly accentuating the horrors we see on screen. "The Devils" concludes with a brilliantly conceived, devastating final image. As Grandier's ashes are swept from the town square, it's fortifications crumbled all around it, Grandier's innocent wife climbs over the broken down wall towards a road heading off into the horizon, studded as far as the eye can see with mounted breaking wheels. Bruegel couldn't have captured the insanity better. Grade: