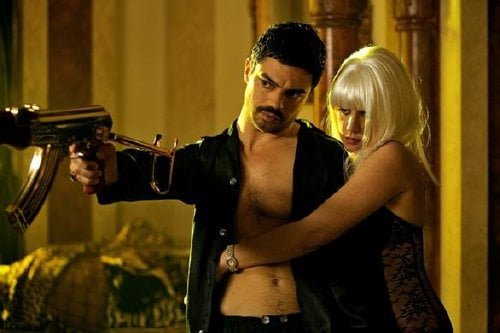 In 1987 Baghdad, Iraqi army lieutenant Latif Yahia (Dominic Cooper, "An Education") doesn't lose his life in war. Instead, when he's ordered to Saddam Hussein's (Philip Quast) palace, he discovers he is to become the body double of the 'Black Prince,' Uday Hussein, a notoriously brutal and sadistic womanizing party animal. Yahia must turn his back on his former life to become "The Devil's Double."

Add another mediocre, not fully realized film to New Zealand director Lee Tamahori's filmography, the same type of sort-of-OK film he's been churning out ever since his searing debut, "Once Were Warriors." Based on the true story by Latif Yahia (adapted by Michael Thomas, "The Hunger," "Backbeat"), "The Devil's Double" offers a truly interesting, if slightly suspect, dual performance by Dominic Cooper and lots of salacious incidents, but the film tells us little about Uday outside of his childish entitlement and sexual depravity and its second half is somewhat incoherent, devolving into a ragged ending followed by title cards that follow news of Uday's death with 'The rest is history.' Huh? The rest of what is whose history? The film opens as an uncomprehending Latif is driven miles from the countryside into Baghdad as he flashes back to a war time incident. Inside Saddam's palace, he meets the ebullient Uday, whom he apparently knew back in school days. Uday outlines his plan, that Latif will become his 'brother' and gives him 10 minutes to 'think about it.' There is clearly no choice, but when Latif persists in bucking Uday's grip, his entire family is threatened with death. After some touching up by German doctors, Latif is ensconced into a life of luxury and scantily clad women. Palace insider Munem (Raad Rawi, "The Kingdom") shows Latif a video of Uday's torture victims (Tamahori mostly keeps his audience from seeing this full on, but what is seen is brutal). Then there's Uday's favorite, Sarrab (Ludivine Sagnier, "Swimming Pool," "Mesrine"), the best f%$& in Baghdad, who immediately seems to favor Latif. Uday's been advised never to touch one of Uday's female accessories without permission, but he falls into an affair with Sarrab (who is first seen leaving the palace in leopard print bra and panties covered by a duster which consists of little but gold chain). Uday chases down a schoolgirl in his Porsche, gets her drunk at a party and fires off guns and later we see flunkies dumping her body in the desert (in the first of the film's two major gaffes, we see her uncovered in the trunk, but completely wrapped when lifted out). Latif is disgusted. Uday goes to clubs, shoots more guns and disembowels one of his father's men, Kamel Hannah (Mem Ferda), on a buffet table. He rapes a bride at a wedding, then orders Latif to pay the family 1,000 dinar when she kills herself. In one of the film's more intriguing bits, Latif takes orders from Saddam's double to go to Basra during the Kuwait War and is televized speaking to the troops as Uday watches with his mother in bed at home. Uday's brother, Qusay (Jamie Harding, "United 93," "Spies"), is barely there although shown to be more serious. Saddam plays tennis with his double and clearly regards Uday as a spoiled child, but apparently lets him have free rein. Then Uday takes off with Sarrab and the film completely crashes and burns. Whose home does he find burned out? His own? Who are the dead people - held for ONE second and yet one of the corpses blinks - within it? How the heck do they get out of Iraq? What's really up with Uday and Sarrab? The film never recovers, never really makes a whole lot of sense after this. Cooper really is pretty astonishing flipping not only back and forth between two different people but also playing one playing the other, but his Uday seems almost a comical caricature with his goofy gap-toothed grin and high, squealing voice. Still, there's no mistaking a pure sociopath in one and moral center in the other. If only the script didn't just jam them together for contrast. Ludivine Sagnier is actually quite interestingly cast as the Iraqi Sarrab, but her character is a complete enigma. Production values are good, with Malta both playing itself and standing in for Iraq. "The Devil's Double" is interesting to watch for Cooper's acting exercise and for those who want titillation, they'll get it in spades, but the film is unfocused and never really provides a sense of the Husseins' familial relationships and just how far Uday's grasp reached. Tamahori seems more interested in making his own version of "Caligula" than looking at one of history's most evil men through a unique perspective.