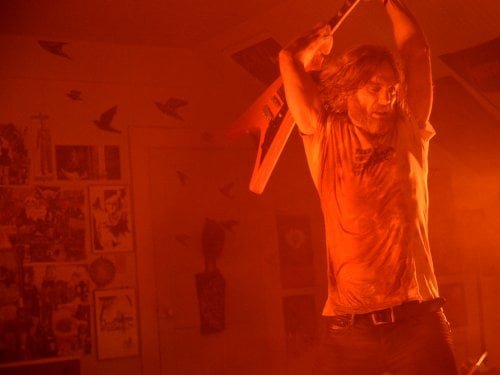 Jesse Hellman (Ethan Embry, "Eagle Eye") art doesn't bring in enough to support his family, but when a rural home comes up for sale at a serious discount, he convinces his wife Astrid (Shiri Appleby, TV's 'UnREAL') to take the leap. The realtor have told them two deaths occurred in the house, an old woman's accidental fall down the stairs followed by the husband who couldn't live without her. But we know that that couple's son, Ray Smilie (Pruitt Taylor Vince, "Heavy," "Identity"), was responsible, and when he returns to the house he knows as home, Jesse becomes consumed by the same evil voices demanding "The Devil's Candy."

Back in 2009, writer/director Sean Byrne had a cult horror hit with "The Loved Ones," the tale of a jilted prom date turned torturing kidnapper. That film was light on its feet, its tone subversively witty. Byrne's latest is seriously horrific, with moments of almost unbearable suspense, yet his film is hampered by a screenplay that stretches credulity at its onset and its climax. Still, this parable about sacrifice versus the seduction of evil is a heavy metal vision of hell. We meet the Hellmans on their way to view the Smilie home, father and teenaged daughter Zooey (Kiara Glasco, "Maps to the Stars") headbanging to mom's amused distress. Her request for something lighter is met with the suggestion of Metallica (the film's soundtrack features Slayer, Machine Head and PJ Harvey among others). This unconventional family is obviously tight. The house proves a dream come true, with a huge outbuilding perfect for Jesse's studio. He's been working on a huge piece with uncharacteristic butterflies commissioned by a bank. Then Ray, obviously not quite right, shows up at the door. Zooey answers and when she notices his tattoo of a red Flying V Gibson guitar, the two connect over a shared passion but a spooked Jesse demands Ray leave or he'll call the police. Zooey berates him for his lack of kindness. The next morning they find the guitar and a Marshall amp leaning against their gate, but Jesse is against Zooey keeping the gift. When she becomes distraught after he forgets to pick her up on her second day of a new school, he relents. Zooey isn't as kindly disposed to Ray after awakening to find him in her bed, though, mumbling that 'he wanted it to be you, but I couldn't.' This time the cops are called, but Ray's gotten away. Jesse begins to hear the same voices in his head we heard with Ray in the film's prologue (experimental metal band Sunn O))) provides the spooky sounds), causing him to trance out and paint pictures of upside down crosses and tortured children which renew the interest of gallery owner Leonard (Tony Amendola, "Annabelle") for their disturbing quality. But Leonard is obviously an emissary of the same evil haunting Ray, angling to make Jesse renege on a promise to Zooey. Byrne gets so many things right, it's unfortunate he drops the ball with reality. The cast is solid, the attempted seduction of Jesse conveyed with genuine tortured anguish by Embry. He's well supported by Glasco as his equally offbeat daughter and Appleby as the more conventional mom with screams worthy of Marilyn Burns. Pruitt Taylor Vince portrays menace as a lost soul in a red track suit. The film uses its twisted paintings and heavy metal as inroads to Satan, but Byrne lays other signposts along the way, like the red glass cross in the Smilie/Hellman front door or the record skip that ends a moving montage with 'already dead.' Jesse's manic painting is crosscut with Ray's crime which 'inspires' it, palette knife to hacksaw, brush to mop, paint to blood, suggesting unspeakable violence (editing by "The Loved Ones's" Andy Canny). Editing and camera shots also rachet up the terror in two scenes of horrific suspense, one in which we learn the meaning of the film's title. The fate of helpful Deputy Winnie (Mylinda Royer) is shockingly gruesome without the aid of makeup effects. But it is no spoiler to note Ray as a mental patient, information that is given us in the film's opening scene, leading us to wonder why local authorities never suspected him of his parents' deaths and other unsolved crimes. Byrne goes overboard with his finale, Jesse becoming super human in his ability to act while grievously injured, an eye rolling development the filmmaker could easily have rectified. Its flaws may undermine it, but "The Devil's Candy" is still a stylish genre outing that delivers fearful chills. Grade: