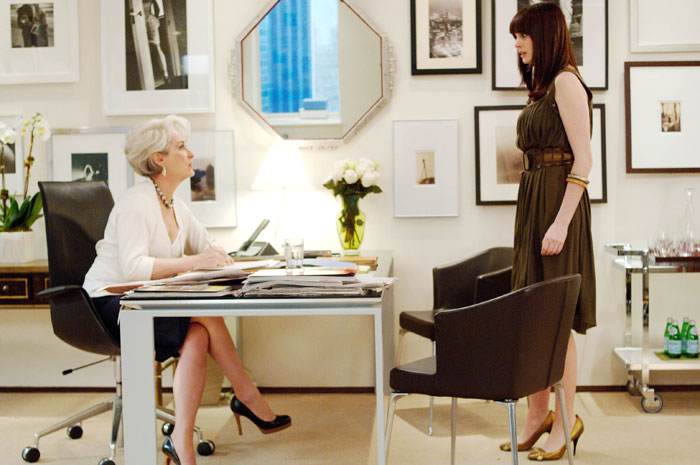 Andy Sachs (Anne Hathaway, "Brokeback Mountain") is at the end of her rope trying to snag her first professional writing gig in New York City, so, although she has no interest in fashion whatsoever, she is excited to land a job as second assistant to Miranda Priestly (Meryl Streep, "A Prairie Home Companion"), the famous editor of Runway magazine. Andy's glamorous boss is said to be a stepping stone to highly coveted connections, but Andy soon discovers that "The Devil Wears Prada."

I must admit straightaway that I once spent the better part of a European vacation chasing a pair of Prada pumps, an odyssey that had a miraculous ending six months later at a Barney's half off sale. And so I am overjoyed to report that "The Devil Wears Prada" does not fall into that cliched trap of featuring fashions so over the top they become a parody of themselves. Instead, "Sex and the City" costumer Patricia Field bedecks her stars (and the 'Clackers' in the background) in Chanel, Valentino and Prada to die for. And, oh yes, the movie's not bad either. That's largely due to the great Meryl Streep, who has an estimable field day playing the wolf in designer clothing. Sporting a silvery bob that blends forerunner Cruella de Vil's tresses just so, Streep tosses off unreasonable demands ('find me that piece of paper I had in my hand yesterday morning') with self possession as her mind races forward into its next thought and delivers the ultimate look that would kill to anyone who dares ask for clarification. In one piece of bravura set design, Streep is backlit by lightning as she paces a hotel room, demanding that Andy get her a flight out of a raging Floridian hurricane. It's a great visual joke. Aline Brosh McKenna has made some improvements adapting Lauren Weisberger's novel (Weisberger famously held a job much like Andy's for Vogue editor Anna Wintour). Andy's boyfriend Nate (Adrian Grenier, HBO's "Entourage") is on more level playing ground, chasing a trendy cooking career rather than teaching disadvantaged kids, and Andy lives with him rather than roommate Lilly (Tracie Thoms, "Rent"), who is relegated to Friday night couples' gathering with her boyfriend Doug (Rich Sommer, all but transparent in the role). The ending's been softened, but not completely defanged, giving Streep the wiggle room to create a person rather over a mere monster. There's nothing new about this story, which has elements from "That Girl!" to "Working Girl" and every film that features a conflict between work and life balance. Anne Hathaway bears an uncanny resemblance to a young Liza Minnelli in this role with her puppy saucer eyes, long nose and wide red smile but her dithery comedy replaces Minnelli's neediness with the need to succeed, to do well even though her career path has taken an unforeseen dogleg. She's like a straight-A student dealing with her first C and Priestley's displeasure proves a potent motivator. The film also features some terrific supporting players, most notably "My Summer of Love's" Emily Blunt, Miranda's slavish first assistant who lives for fashion and gradually develops a wary appreciation for her underling. Also good is Stanley Tucci ("Shall We Dance," "Lucky Number Slevin") as Runway designer Nigel, Andy's fairy godmother at the ready with harsh advice. Simon Baker ("Something New") is saddled with an underwritten role as journalist Christian Thompson who inexplicably gets worked into the plot as siding with Priestly's rival and who never makes a convincing romantic threat for Nate. Watch for cameos from Valentino, Heidi Klum and Gisele Bundchen in a small bit evaluating Andy's fashion transformation. "The Devil Wears Prada" is an entertaining boss from hell flick that manages to skewer the fashion industry with something like affection.

Andy Sachs (Anne Hathaway) has just graduated from journalism school and is ready to take Manhattan by storm. She lands a job at the prestigious fashion magazine, Runway, but isn’t prepared for her boss, the uber-demanding Miranda Priestly (Meryl Streep), and she soon learns that “The Devil Wears Prada.” Based on the novel by Lauren Weisberger, “The Devil” is a typical fish-out-of-water, small-town-girl-goes-to-the-big-city story that benefits greatly from two things: a terrific cast and sharp, rapid-fire dialog. Andy gets the job at Runway despite her lack of fashion sense but is immediately put to task by the very challenging and utterly ruthless Miranda. As second assistant to the editor-in-chief she is also second banana to first assistant Emily (Emily Blunt). What started out as a temporary situation until she finds a “real” job soon turns into an unanticipated life style change. Andy has an ally in the guise of the magazine’s fashion coordinator Nigel (Stanley Tucci) who takes the plain Jane and, with Runway’s unlimited fashions and accessories at hand, turns her into a swan. The very intelligent and quick to learn second assistant soon gets the hang of the fielding Miranda’s outrageous demands but being at her beck and call at any hour makes serious inroads into Andy’s private life, especially with boyfriend Nate (Adrian Grenier). When Miranda orders Andy to travel to Paris for the mother of all fashion shows, promoting her over Emily, the new first assistant has, according to Nigel, “gone over to the dark side.” Long time TV director David Frankel makes his feature debut with the adapted screenplay by Aline Brosh McKenna and does a competent job with the straightforward, no surprises script. Of course, being set in the high-powered world of fashion journalism where being a size six is considered fat gives “The Devil Wears Prada” a slick, appealing look. Costume designer Patricia Field does an exemplary job, with her stock of designer wardrobe, in making fashion a character in the film. Production design, by Jess Gonchor, and art direction, by Tom Warren, are no slouches either in giving the film a rarified look into the fashion business. Florian Ballhaus’s glossy photography and Mark Livolsi’s stylish editing also help to make this a well-crafted debut work for Frankel. Anne Hathaway holds her own as the film’s central character, playing Andy as a young woman who is secure in her ability to take everything that Miranda can dish out. As usual, Meryl, O marvelous Meryl, Streep does an exemplary job as the bitchy, witchy Miranda Priestly and positively drips her venom of disdain for everything and everyone that does not come up to her standards. Stanley Tucci takes on the role, which normally belongs to Hector Elizondo (“Pretty Woman,” The Princess Diaries”), as Andy’s mentor and muse and makes it his own here. Emily Blunt is terrific as the other assistant and delivers an amusing arc of a performance. With all of the high fashion design and the lofty atmosphere of that world, “The Devil Wears Prada” is aimed at the youthful fashion-conscious femme audience and it hits its target squarely. But, it is clever enough, with some very biting dialog (mostly thanks to Meryl’s delivery), to be suitable date material for the more open-minded guys. Quality shows, even in a chick flick.