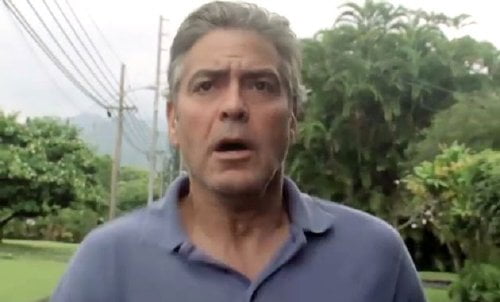 Matt King (George Clooney) runs a successful law firm on Oahu, Hawaii, but his seemingly stable life is turned upside down when a boating accident puts his wife into a life-threatening coma. This leads Matt to try to rally himself and his daughters, rebellious teen Alexandra (Shailene Woodley) and 10-year old Scottie (Amara Miller), until shocking information about his wife’s past comes to light in “The Descendants.”

When his wife Liz falls into a coma after a boating accident off Waikiki, Matt King (George Clooney) suddenly finds that his backup parental duties haven't prepared him for dealing with his two daughters, 10 year-old Scottie (newcomer Amara Miller) and 17 year-old Alexandra (Shailene Woodley, TV's 'The Secret Life of the American Teenager'). Things get worse when Alexandra lets spill that mom was having an affair and if his immediate family problems are not enough of a burden, Matt's also in the process of deciding what to do with the family's royal Hawaiian heritage, a 25K acre Kauai land trust, for the large group of cousins who are "The Descendants." Cowriter (with Nat Faxon & Jim Rash)/director Alexander Payne left his hometown of Omaha for his last film, 2004's "Sideways." Now, with an adaptation of Kaui Hart Hemmings's novel, he crosses the Pacific to visit three of Hawaii's islands, but his theme of characters at life's most stressful turning points continues. This tale of nuclear family left rudderless as its patriarch must make a decision that has meaning for descendants and ancestors both could be universal, but Payne has used Hawaii as it's rarely seen on screen, the 'paradise' of everyday life both urban and rural, American and Polynesian, the different traits of its archipelago. Matt King could live like a multi-millionaire based on his inheritance, but has instead carved out an upper middle class life for himself with a successful law practice. Apparently that career has distanced him from his family, as he's totally at sea when he's called by the parent of one of Scottie's classmates demanding an apology for her behavior. As for his wife's condition, Matt tell us in voice over that he's peeved by those who think his life is all island paradise, then tells his comatose betrothed that she's got his attention. Then he gets the KO. Twice in fact. When the doctor informs him that Liz (Patricia Hastie, "Princess Kaiulani") will never respond, he has another family legal matter to deal with - that of her living will. He takes an oblivious Scottie over to the 'big island' to pick up the unruly Alexandra at boarding school. She's a coiled spring of anger and resentment until she finally lets off steam by informing her dad that she's furious with her mother for having caught her with another man. And so, with this betrayal from beyond clouding his judgement, Matt takes his girls on a two part journey - first to inform close friends and family to say their goodbyes, then to find that other man. "The Descendants" has been ecstatically received by some, but the film's not perfect. It is a very good film inspired by specific source material and Alexander Payne has a knack for finding the humor in pain without losing heart. But as entertaining as George Clooney's performance is, he's not really bringing anything new to the table, even if this is the first time he's been cast as a cuckholded dad. This is the Clooney of Coen Brother comedies who exaggerates his good looks by turning the dial too high or too low, here with his geeky sprint in flip flops to the home of best friends Kai (Mary Birdsong, TV's 'Reno 911!') and Mark Mitchell (Rob Huebel, TV's 'Childrens Hospital,' 'Traffic Light'), to find out what they knew. Mark's embarrassed but Kai's defensive about Liz, telling her husband she felt alone and was preparing to leave him. Then Alexandra recognizes that guy she saw with ma on a real estate placard - one Brian Speer (Matthew Lillard, "Scream," "Scooby-Doo"), a man clearly not in Clooney's attractiveness scale. It will be no surprise that his occupation connects Matt's intimate problem with his larger one, especially when a call to his office reveals that Speer is in Kauai for the week. Matt breaks the news about mom to Alexandra while she's in the pool - she dives down for a primal scream - then begins to be more helpful with dad, except maybe for the presence of 'friend' Sid (Nick Krause, "How to Eat Fried Worms"), a laid back up she insists will travel with them. First up - Liz's parents, a belittling father-in-law (Robert Forster, "Jackie Brown") whose daughter could do no wrong and his wife 'Tutu,' suffering from Alzheimer's (her confusion causes Sid to laugh, gaining him a black eye from the old man). Matt throws an open house to break the news to the rest, then takes the kids to Kauai to hunt down Speer, who, it turns out, is renting a cottage from Cousin Hugh (Beau Bridges, perfect as a laid back islander). Matt gets to Speer through his wife, Julie (Judy Greer, "Love and Other Drugs"), who quickly susses out what's going on and acts out her anger, as Alexandra did earlier, at Liz's bedside. Grief causes people to act inappropriately, but that fails to explain Sid (who, it turns out, is some kind of chess champ and just lost his dad months earlier). And although Clooney's performance sometimes verges on caricature, his goodbye to his wife is genuinely heartbreaking. Making her feature debut, Shailene Woodley is preternaturally composed, especially playing a conflicted teen, and Amara Miller doesn't appear to have an unnatural bone in her body, a bit of an oddball not unlike Disney's Lilo. Forster makes a strong impression with scant screen time. Payne and cinematographer Phedon Papamichael ("Sideways") have made Hawaii perhaps a bit too pristine, but the contrasts they find, from Honolulu's downtown office buildings to Hanalei Bay, local eateries and sprawling old homes, provide an environment strong in personality which helps define its denizens. This is definitely the Hawaii where people actually live, and the family tie to the land is palpable. As an added bit of island lore, big wave surfer Laird Hamilton plays Troy, an acquaintance of Liz's who is Matt's first suspect. "The Descendants" is the movie the 2007 John Cusack film, "Grace Is Gone," wanted to be.

The King family were among the first colonists on the Hawaiian Islands and they crossed genes, early on, with the native royal family. Because of this, Matt’s family was granted vast tracks of land on Kauai, held in a trust that will expire in seven years. As the sole assigned trustee to the grant, Matt has total control over what is now worth hundreds of millions of dollars. His decision is final and Matt is loath to make any hasty decisions. That is, until he learns that he has been a cuckold and decides to set out to find the man who stole his wife. This is where the center of the film actually is as Matt, Alexandra and Scottie set out on a journey to find the man who ruined his life. They journey to Kauai, ostensibly to check on the family property, but, in reality, to narrow down their search and find the most likely suspect – a realtor by the name of Brian Speer (Matthew Lillard). It turns out that the salesman stands to make a huge commission as the broker for the sale of the King family property, upping the ante for Matt. “The Descendants” mixes family drama, high stakes real estate dealings, a man’s effort to rekindle his relationship with his partly estranged daughters, a marriage he never knew had failed and life and death. There is a whole lot going on in “The Descendants” and director Alexander Payne – adapting the source novel (by Kaui Hart Hemmings) with Nat Faxon and Jim Rash – weaves an elaborate tapestry of drama and comedy. Each story line, though, is fully explored and the main characters have a nice arc of development as the tiny family of Matt, Alex and Scottie grow close under their adversity. George Clooney goes against his usual type and gives a serio-comic performance as Matt, a man whose life is falling down around him. Matt, though, is stoic and smart and will overcome the adversity and Clooney gives him depth. In her first big role on the big screen, Shailene Woodley stands toe to toe with Clooney and she comes off well as both his daughter and his equal. Young Amara Miller makes her debut in what could have been a cute, precocious perf as Scottie, but Payne elicits something a bit earthier from the youngster. The supporting cast is mostly of the cameo variety but such veterans as Beau Bridges and Robert Forster make the most out of their brief time on screen. Matthew Lillard, when he appears for the first time, got a “where the heck has he been” response from me. His role, though, is simply two-dimensional and a harmless cardboard adversary. Judy Greer, as Speer’s wife, garners great sympathy as she, too, learns the truth about her spouse’s infidelity and forms a tenuous bond with the Kings. Techs are first-rate all around, from the location selections (it must have been tough working in paradise) and costume (great Hawaiian duds) to lensing, by Phedon Papamichael, of said locales and clothes (and everything else he points his camera at). It has been over seven years since Payne’s last film, “Sideways,” was released and the man has not lost his touch. His exploration into the lives of his subjects, as in all his films, does not provide thrills or chills but does give us a good story and character study.