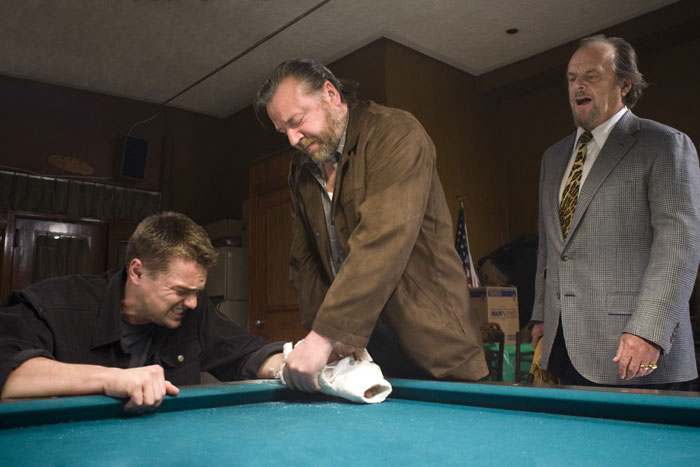 Frank Costello (Jack Nicholson) rules the Irish mob in Boston’s “Southie” with an iron fist. To help maintain this control, he grooms young Colin Sullivan (Matt Damon) to enlist in the Massachusetts State Police and become his mole in the “system.” Meanwhile, Billy Costigan (Leonardo DiCaprio), another state cop enlistee, is fired then hired by his police bosses to infiltrate Costello’s gang and bring him down. The two young cops, one good and one bad, are on a collision course as they hunt ferret out each other in director Martin Scorsese’s “The Departed.”

Two Boston Irish Catholic boys grow up with disadvantages and their lives become intertwined as they take wildly divergent paths that cross violently. Billy Costigan (Leonardo DiCaprio, "The Aviator') is the kid trying to distance himself from an uncle on the wrong side of the law by joining it, but he goes undercover into the very gang that seduced his relative. Colin Sullivan (Matt Damon, "Ocean's Twelve," "Syriana") was picked early by mob boss Frank Costello (Jack Nicholson) and groomed as an upstanding member of the community who would join the State Police as Costello's inside man. Costigan and Sullivan are haunted by those who came before them, "The Departed." After a string of films that have been met with muted enthusiasm, director Martin Scorsese returns to his street crime roots, but gives his old genre new tricks in his latest, a Boston set remake of Hong Kong's "Infernal Affairs" which local screenwriter William Monahan ("Kingdom of Heaven") has neatly overlayed with Boston's true life scandal of Most Wanted mobster Whitey Bulger and the F.B.I. The effect makes for a cocky film, something that plays a little faster than real life and is stuffed to the gills with testosteronic humor. Yes, indeed, Marty's back, but one wonders if his film would have had a greater impact as a straight ahead telling of the Bulger story. On the other hand, who cares when the movie is this good? Nicholson's Frank Costello is the thinly disguised Bulger character and in an opening monologue (filmed in a stylish Balhaus tracking shot) he informs us that 'No one gives it to ya, ya gotta take it.' The guy's so crazy brutal that his own right hand man, Mr. French (Ray Winstone, "Sexy Beast," "The Proposition"), advises him that he 'really outta see somebody' when Frank laughs at the way a woman falls when they execute her at point blank range. He buys a young Sullivan with loose change and groceries for grandma (brazenly robbed from the corner store he's standing in) and soon has the kid running his streets. Sullivan grows up and fast tracks into a job as Sergeant in the State Police's Special Investigation Unit, an ideal locale to be planted for his real employer, Frank Costello. First, though, he has to run the welcoming gauntlet of Captain Queen (Martin Sheen, TV's "The West Wing") and Sergeant Dignam (Mark Wahlberg, "Invincible"), a good cop/bad cop routine if ever there was one. These same two great another new Statie, Billy Costigan, whose motivations Dignam immediately challenges. He's offered an undercover role based on the familial low lifes he is trying to get away from, like cousin Sean (Kevin Corrigan, "Walking and Talking," "Lonesome Jim"), who he hooks up with in a drug deal that leads him right into Costello's circle. And it's not only Costello who will link these two. Sullivan smoothly links himself to police psychiatrist Madolyn (Vera Farmiga, "Down to the Bone," "Running Scared"), a woman Costello views as Colin's Achilles heel. When she treats Billy for his apparent fall from grace from the police department, emotional sparks fly. Between the cat and mouse game on the streets and the romantic triangle only Madolyn sees, this whole thing is a powder keg waiting to blow. The cast is simply excellent, one of the best of the year. Even the notoriously difficult Boston accent is done proud in "The Depahted." DiCaprio and Damon are like hot and cold, ying and yang, the former all emotion, the latter all steely intelligence. DiCaprio's never been better as the psychically bruised young guy with dual identities as a street punk and 'lace curtain' Irish, a cop and a killer. Damon is smooth and wickedly witty - you can see the gears constantly turning in his head. He's got one of the film's best scenes when one of Costello's henchmen, Fitzy (David Patrick O'Hara, "Hotel Rwanda"), awaits his lawyer in an interrogation room. Sullivan manages to get Fitzy to warn Costello of cops approaching, then turns the cell phone over to his mates, providing their target's location. It is a real example of an actor and his writer perfectly paired. Wahlberg, who was robbed of an Oscar nomination in the otherwise so-so "I Heart Huckabees," is the best thing in the movie though. He's simply hilarious, a bad ass cop on the side of good like a heat seeking missile. Your jaw will drop at some of the things that so effortlessly come out of his mouth. And what of Jack? Well Jack's just fine, but one among equals here, not the film's kingpin. Wisely, he resists chewing the scenery, yet still manages to come across as a lethal, hairtrigger force. Support is terrific across the boards, from Alec Baldwin's SIU Captain Ellerby to Sheen's sympathetic Queenan. Vera Farmiga is like a light shining in the dark as Madolyn. Scorsese, always a keen chooser of music, leans on some old favorites, like "Gimme Shelter," to stamp his brand and even falters with one instrumental interlude, but the freshness of Boston punkers Dropkick Murphys' 'I'm Shipping Up To Boston' encapsulates his film's attitude - it's cheeky, it's hardcore and it's in your face.