The Den on DVD 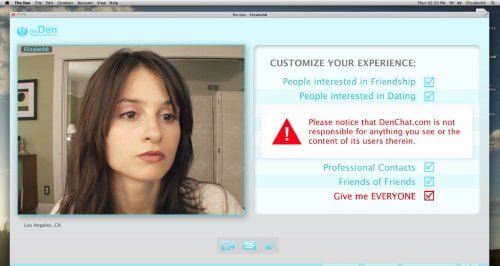 After her thesis grant for studying chat roulette participants is confirmed, Elizabeth Benton (Melanie Papalia, "Smiley") takes the warning that the hosting site is not responsible for what she might see for granted, but the Internet is about to show the worst of its underside when she logs onto "The Den."

Cowriter (with Lauren Thompson)/director Zachary Donohue puts a new spin on the 'found footage' genre with this incredibly clever and creepy film that delves into our worst online fears. Using (mostly) webcam footage on a screen which also features chat pop-ups, email, online searches and Smartphone texts, "The Den" may be the first film that's more chillingly effective viewed on a laptop than the big screen. I usually don't care for laughs mixed in with my horror, but Donohue and company use just the right mix, beginning with a great gag that also strengthens their theme that you shouldn't always believe what you see/hear/read on the Internet. Elizabeth's first foray into The Den is the expected mix of attention seekers (the wonderful penis puppet!), perverts, scam artists and the apparently 'normal.' Found footage police may begin to wonder just why we're seeing a closeup of an unseen person's hand running itself over the sheets covering a sleeping Elizabeth, but patience is rewarded and all, or at least most, inconsistencies are explained by the film's end. The filmmakers are also smart about delving into torture porn - there's a strong dose of it early on, but it's just enough to bait their trap as Elizabeth witnesses the horrific murder of a young girl directly after connecting with a young Indian woman whose still photo is explained away as a broken web cam. She engages the Cybercrime unit of the local police and Sgt. Tisbert (Matt Riedy) responds, but is unable to verify the authenticity of her footage. Identity theft, a leaked sex tape and malware are preludes to even more horrifying experiences. Papalia, who resembles 'Glee's' Lea Michele, is almost always on screen and gives a thoroughly natural performance. Also fine are David Schlachtenhaufen as boyfriend Damien and Adam Shapiro ("Now You See Me's" pickpocket victim) as techie best friend Max. Bernard Hunt's digital photography uses horror standards for framing action that we can't quite see but also subtly incorporates horrors in his backgrounds. There are a number of well staged chat gags that work as shorts in and of themselves. If only the filmmakers hadn't leaned on cliches just as they hit their climax (and one even before when a grant advisor is almost illogically quick to snap to judgement, especially considering the thesis in question). People being warned frantically cannot seem to get the message and Elizabeth's ultimate fate has been done before. Still, "The Den" delivers honest chills and sends a strong message.