The Deeper You Dig 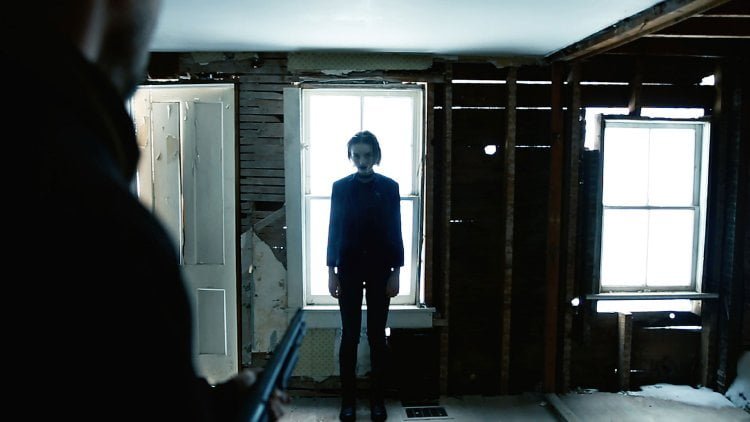 When her 14 year-old daughter Echo (Zelda Adams) disappears, Ivy (Toby Poser), a clairvoyant who’s ‘lost her calling,’ suspects that Kurt Miller (John Adams), the man renovating the farmhouse down the road, knows what happened.  And indeed, while Kurt accidentally struck the teen who was sledding at night in a snowstorm, his drunken state caused him to make such bad decisions, when he discovered she was actually still alive, he murdered her.  Now, he has bigger problems than Ivy, because Echo had learned enough from mom to invoke the Sign of the Seven Circles that keep her from crossing over into death in “The Deeper You Dig.”

It is quite astonishing to learn that this unconventional ghost/possession tale not only stars a mother, father and daughter in its three primary roles, but that it was also written and directed by Adams and Poser, shot by Adams and his daughter Zelda and edited and scored by Adams as well.  This is the fifth film created by the family’s Wonder Wheel Productions and if you haven’t heard of them before, if there’s any justice “The Deeper You Dig” should change that.  This is a stylish looking, well acted film that examines the strong bond between a mother and daughter both before and after death with plenty of creep factor for genre buffs.

We first meet Ivy (Poser resembles Colleen Dewhurst crossed with Bonnie Bedelia and Melissa Leo) picking up Echo from school, mother clearly as rebellious as her Goth daughter.  It’s snowing heavily and Echo is psyched for weekend hunting, aiming for ‘7 under 20,’ and some sledding that very night, but mom says no, she can’t keep night watch on the road as she’s got an appointment with Mrs. Minskey (another Poser relative, Joan), a client wishing to contact her dead husband who Ivy’s been stringing along financially (‘That’s so c*nty, I like it,’ admires Echo).

When Echo never comes home, Ivy contacts the small town’s Detective Sanford (Bob Lane) and Detective Davide (Izzy Figueredo), who accept her intuition that her daughter is dead.  Walking the roads, she’s passed by Miller in his truck (the two women and their neighbor have a near miss in a convenience store, repeated with the eerie stand-in of a missing poster upon which Kurt lays rope and a tarp).  Back at the farmhouse renovation, an antique radio insistently plays ‘Ain’t She Got Fun’ on every station and even when off in a sequence that seems inspired by Steven King.  Then Ivy pays Kurt a visit, hanging around so often she begins to get inside his head in ways that mom can recognize, his guilt made manifest.

The power of seven and the folkloric symbolism of the stag are effectively used throughout the film, Ivy finding signs of each in things her daughter left behind.          The filmmakers get surreal depicting Ivy’s journey, for which a fellow practitioner tells her she will ‘pay dearly,’ with nightmarish visuals including bottomless chasms, forced feedings and decaying clown makeup. While these can play as actor’s exercises, Poser is up to the task, but the power they invest in cinnamon coffee cake cappuccino and a trip to the bathroom for a pee are more playfully effective.

Ivy (Tobey Poser) and her daughter, Echo (Zelda Adams), are closer than most. Ivy has psychic ability that she uses to promote her phony fortune telling business. Kurt (John Adams) is a drifter new in town refurbishing an old, abandoned house. These three souls will have their paths cross over one night in a horrible and tragic way in “The Deeper You Dig.”

Much will be made about the filmmakers responsible for what is a truly family affair. Tobey Poser, with husband John Adams and their daughter, Zelda Adams, write, direct, edit, photograph and score what is their fifth family film collaboration.

Ivy and Echo have a special bond that is stronger than most mothers and daughters. As mom gets ready to leave to give a séance, Echo asks her if she wants to go sledding with her that night when she gets home. Ivy happily agrees.

Kurt, isolated in the abandoned house, lives a solitary life of working on the building and going into town for food and to drink. After a few too many, he heads for home and, on the way, realizes he hit something on the road. He finds Echo, lying bloody, with her sled. Convinced that she is dead and that he is to blame, he tries to bury the body but the ground is too frozen to dig deep. He takes it to the abandoned house and dumps the corpse into an old bathtub. But, she is not dead!

What transpires in this family filmmaking affair is a non-mystery mystery and I do not mean that in a bad way. On the contrary, there is a deft hand (or three) both behind and in front of the camera that melds the supernatural tale with the mother-daughter story in an intriguing way. And, it keeps you on the ball for the whole movie making the time well invested.