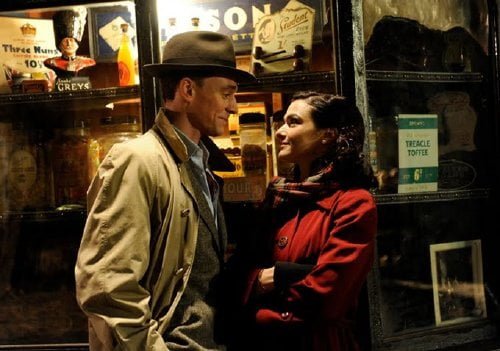 Married to a judge many years her senior before she had a chance to experience life, vicar's daughter Hester Collyer (Rachel Weisz, "The Constant Gardener," "The Whistleblower") finds herself in lust with ex-RAF pilot Freddie Page (Tom Hiddleston, "Thor," "War Horse"). She leaves cultured comfort for a blue collar walkup where her lover turns out not to be as ardent as she, and Hester finds herself between the devil and "The Deep Blue Sea."

In adapting the Terrence Rattigan play, writer/director Terence Davies ("Distant Voices, Still Lives") returns to his favored milieu, that of post-war Britain. There's no doubting this is a Davies film, with its meticulous period detail, pubs full of singing drinkers and sepia-toned nostalgia. But although this is a handsomely mounted production, he and his star, Weisz, are unable to make us empathize with Hester's dilemma, her passion for the shallow Freddie inexplicable. Thankfully, the filmmaker and his costars reach the right balance of sadness and hope to wrap their film with. It opens beautifully as well, with a long tracking shot which establishes Page's London neighborhood as one of boarding house brownstones and bombed out craters. The camera climbs up a wall trailing ivy before settling on a woman peering out a window - this is Hester, her voice narrating the contents of a suicide note she's prepared for Freddie. In a flash back, we see her, well dressed, sitting by a fire with a book, sharing a weak smile with her husband, the doting Sir William Collyer (Simon Russell Beale, "My Week with Marilyn"). Another illustrates her meeting Freddie, the friend of her friend Liz Jackson's (Sarah Kants, "Miss Pettigrew Lives for a Day") husband Jackie (Harry Hadden-Paton, "La vie en rose"), the two men high on their war exploits and Old Blighty. In fact, it is this flashback which is the crux of the film's problem. The scene needed to have palpable spark and connection and all we get is an interested twinkle from Weisz and Freddie as Freddie is. Telling tales of broken romance in flashback has been done before, and well, but here it doesn't really work. The post war setting is integral to the story, everyone jolted out of former complacency, thinking themselves on the brink of a new day. There is also the morality of the time (early 1950's) which would judge Hester harshly. In fact, when she moves in with Freddie, his landlady, Mrs. Elton (Ann Mitchell, BBC's 'Eastenders'), is led to believe they are married. It is Mrs. Elton who finds Hester unconscious after her suicide attempt goes awry when the gas meter runs out. Another tenant, Miller (Karl Johnson, "Hot Fuzz," HBO's 'Rome'), a man of mysterious medical knowledge (and, one presumes, an abortionist) tends to her. She asks both not to tell Freddie. The breezy young man arrives the next day jabbering away about his golf game and a possible lead on a job fro an Argentinean he's met. He's so self absorbed it takes a while for him to realize Hester's not fully engaged. Then we discover what all the drama was about - Freddie forgot her birthday. When he finds her note to him in her pocket, he's enraged, tearing away from her neediness. This is their cycle when they're not in the sack, the only raison d'etre for this pitiful relationship. Perhaps if Davies had told the story more linearly, we could have felt more for Hester's choice. It is only later that we see how her father rejects her decision in favor of propriety and how we see her husband cast in his only bad light - that of the quintessential English mama's boy, Hester's buttoned-up mother-in-law (Barbara Jefford, "The Ninth Gate") verbally skewering her at every turn, determined to break her sexy spirit. William, who at first says he never wants to see her again once she confesses her affair, returns in concern after being contacted by Mrs. Elton (now savvy to her predicament), hoping to once again take care of her. But Hester is adamant that Freddie is her world, until, that is, she realizes he isn't. This happens during the film's 'Anna Karenina' moment, when, distraught after being rejected over the telephone, Hester races down into the tube. But as she stands on the edge of the platform, another flashback comes. A slow tracking shot reveals a disparate group taking shelter there during an air raid. One lone, heartfelt voice sings 'Cockles and Mussels' and the camera comes to rest on Hester, swaddled in a fur coat and her husband's arms. They're survivors, supporting one another. She's survived and will again. Art direction is award worthy, from the hand-painted fire screen in Freddie's apartment to a scene set outside a tobacconist's, its windows stuffed with period appropriate wares. Costume and makeup are part of the design, as is the overripe violin score (Samuel Barber's Violin Concerto) which mirrors Hester's outsized emotions. "The Deep Blue Sea" is an interesting counterpart to David Lean's 1945 "Brief Encounter," whose heroine experiences a heady love affair only to 'do the right thing' and return to her none-the-wiser husband. This film, though, looks at love through the eyes of many, from the principles to Mrs. Elton and even Freddie's horrified friend, and sees only pain.