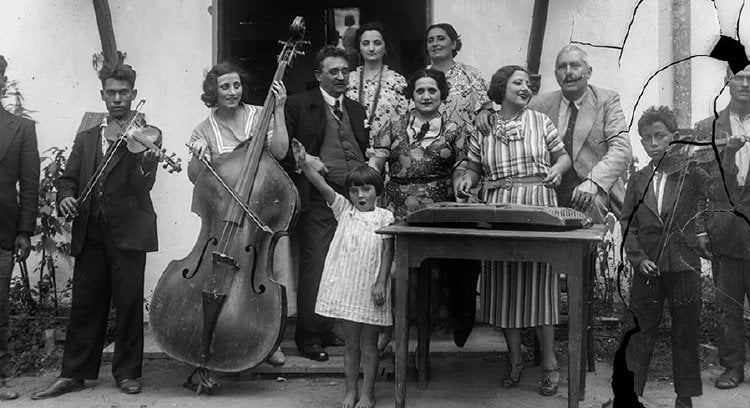 A trove of old glass photos from the 1930s and 40s were recovered from a little photo shop in a town in southern Romania. They show everyday life through those years and it is an oft idyllic scene. The truth, though, is during that time fascism, imported from Nazi Germany, engulfed the country in hate, anti-Semitism and war, making it “The Dead Nation.”

Using a trove of recently discovered glass-plate photographs from the 30’s and 40’s, writer/director Radu Jude (“Aferim!,” “Scarred Hearts”) paints an eerie picture of Romania from just before and through the WWII years. The photographs are of soldiers and of children in studios with painted backdrops and of bakers and of hunters, the only disturbing images a series of individual school kids giving the ‘Sieg heil’ salute. Otherwise they depict a normalcy which is not at all evident in the film’s soundtrack. Here Jude uses patriotic songs and the increasingly anti-Semitic speeches of politicians. We are read to from the journal of Jewish physician Emil Dorian, an increasingly chilling account of daily life in Romania, one in which its Prime Minister is assassinated by fascist Legionnaires whose subsequent laws state the money may be taken from Jews, but never given to them and which challenges their citizenship. Dorian notes that the majority do not embrace this, but those that do become increasingly brazen, ordinary citizens soon murdering Jews and leaving their bodies in the streets. The account becomes worse, even, than that, so much so that our blood runs cold. This is an eye witness account of how tyranny and genocide take hold and it is far too relevant today. The photographs themselves are incredibly sharp, so vivid we can almost feel textiles, yet they have suffered damage. Most is minimal, but some obliterates almost the whole scene, a creeping rot. “The Dead Nation” is a masterful cinematic recreation of history, showing us a decaying, innocent world while telling us how what we do not see is destroying it. (“The Dead Nation” is from 2017, the same year Bill Morrison released “Dawson City: Frozen Time,” another documentary which uses rediscovered film to paint the history of a place a half a world away.) Grade:

I did not know a thing about “The Dead Nation” except for a cleverly constructed trailer that made it for me, a student of history, especially WWII, a must see. What I saw is an original approach to telling a story about Romania, the war, fascism and how it overwhelmed a country. The photo montage collected by director Radu Jude shows families and friends in celebration, starting in pre-fascist 1937. They progress through the years as the fascists come to power, the acceleration of anti-Semitism, the alliance with Germany, the descent into war, the victories and defeats and, eventually, domination by the Soviet Union. It is remarkable to think that all of the terrible things took place in just a scant eight years. The photos, though, are only half of the story of “The Dead Nation.” As we watch the still pictures flow by, the filmmaker uses, from the time, news reel audio, political speeches and declarations and, most effectively, readings from a Romanian Jewish doctor who lived in the time and place. The matter of fact narration of the terrible events combined with the benign-looking photos – some depict children giving the Heil Hitler salute – is a chilling look into a history that, if we are not careful, may repeat itself.