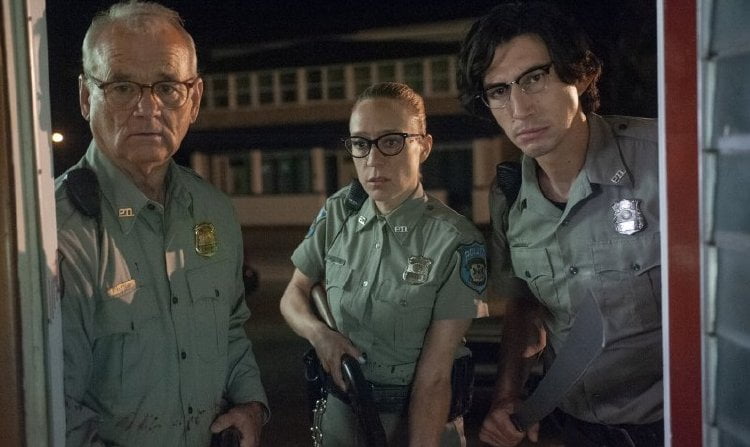 The earth has stopped spinning on its axis because of polar fracking, animals have gone loco and time itself is in flux. That is bad enough for the inhabitants of the big blue planet, and the sleepy little town of Centerville, but now the dead are coming back to life, sort of, in “The Dead Don’t Die.”

In the small town of Centerville, Chief of Police Cliff Robertson (Bill Murray) and his Deputy Ronnie Peterson (Adam Driver) wrap up their day investigating Farmer Miller’s (Steve Buscemi) accusation that the town hermit, Bob (Tom Waits), stole one of his chickens. Cliff fails to act, even after Bob takes a shot at them, because he believes Miller’s a jerk and Bob is innocent. He’s more concerned about the fact that at 8:20 p.m. it is still light out and why the song on the radio sounds so familiar. ‘It’s the theme song,’ explains Ronnie, breaking the fourth wall referring to Sturgill Simpson’s “The Dead Don’t Die.” This is Jim Jarmusch’s “Oceans Twelve,” a movie featuring someone from the cast of every single one of his feature films (beginning with 1980’s “Permanent Vacation”) that appears to have been more fun to make than it is to watch, easily the most disappointing effort of his career. Sure there are efforts at socio-political commentary (polar fracking has thrown the earth off its axis) and in-jokes (references to George Romero movies) in his zombie comedy, but they feel lazy, not biting or witty enough by far. As Cliff’s method of police protection appears to be endless patrolling and little action, so goes Jarmusch’s deadpan repetitiveness. Take Ronnie’s proclamation that ‘this is not going to end well.’ It’s pretty amusing, especially given Driver’s delivery, but by the fifth or sixth time, it’s lost its charm. Farmer Miller conversing with hardware store owner Hank Thompson (Danny Glover) at the local diner while wearing a red ‘Make America White Again’ cap is an easy target. That Centerville’s third police officer, Mindy Morrison (Chloë Sevigny), exists in a constant state of fear is perhaps the film’s subtlest subtext, but the character is far more annoying than amusing. The cast is rounded out by “Stranger Than Paradise’s” Eszter Balint as diner waitress (and first victim) Fern, Caleb Landry Jones as gas station attendant Bobby Wiggins, Larry Fessenden as motel owner Danny Perkins and Selena Gomez as the out-of-towner who arrives in a 1968 Pontiac Le Mans and checks in (along with Austin Butler and Luka Sabbat) to be labeled a city hipster. Wu-Tang Clan’s RZA gets a one-joke laugh as the town’s Wu-P.S. deliveryman and Rosie Perez delivers as newscaster Posie Juarez. As is often the case, Tilda Swinton creates the most compelling character as the Scottish Samurai mortician Zelda Winston who is quite obviously (to anyone not in the movie) an alien. Maya Delmont, Taliyah Whitaker, and Jahi Winston play a trio of teens held in juvenile detention, their newcomer status perhaps explaining their completely dropped story strand. While much of the film tips its hat to Romero’s “Night of the Living Dead,” Jarmusch utilizes Romero’s sequel, “Dawn of the Dead,” for his consumer-oriented zombies. The device doesn’t work nearly as well as celebrity casting, the initial ‘coffee’ zombies played by Iggy Pop and Jarmusch partner Sara Driver. Cliff’s dead drunk tank occupant is none other than Carol Kane. Sturgill Simpson shuffles dragging a guitar behind him. Honestly, I more enjoyed the film’s setting, the Catskills’ village of Fleischmanns offering a nostalgic look at rural American life, than by anything that happens within it. ‘Kill the head’ is unlikely to gain traction as a movie quote (and what’s up with the sooty puff that emerges from those decapitated?). “The Dead Don’t Die” may be described as a ‘gentle’ comedy, but in truth a better descriptor would be ‘toothless.’ Jarmusch did better with fangs. Grade:

It must have seemed like a good idea to writer-director Jim Jarmusch: bring together many of the cast members from his past fiction films, write a satirical zombie story about consumerism and man destroying the world and releasing the walking dead upon the clueless population. Also, have the main players give a dead-pan delivery to their lines, repeating things like, “This is going to turn out badly.” Unfortunately, little of it works. What we have is a talented filmmaker gathering all of his buddies together to put on a show. The problem is, it may be a party for everyone involved in the project but I felt like an outsider not let in on a joke. The dead-pan humor is more dead than humor and repeating lines like the above, and “Kill the head,” do not make them funny, just repetitive. The zombie movie genre has, to me, overstayed its welcome. But, I had hopes when Jim Jarmusch threw his eclectic talent into the mix, he would give us something different, if not new. What we have in “The Dead Don’t Die” is an attempt to spoof zombie movies by making a tongue-in-cheek zombie movie. In the end, it is just a not-very-funny comedy horror movie with a big name cast – if you can recognize them.