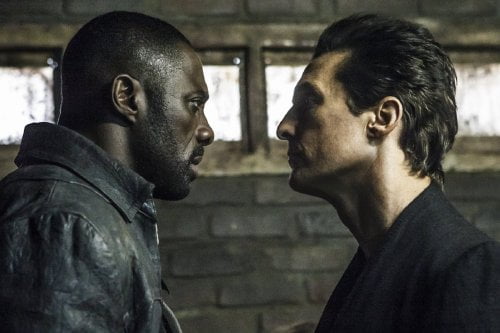 11-year old Jake (Tom Taylor) lost his fireman dad in the line of duty a year ago. Since then, he has had dreams or “visions” of the evil Man in Black (Matthew McConaughey) out to destroy the Earth and the Gunslinger (Idris Elba) who vows to stop him in “The Dark Tower.”

A Gunslinger (Idris Elba) and a Man in Black (Matthew McConaughey) haunt the dreams of Jake Chambers (Tom Taylor), who draws his overnight visions, alarming his mother, Laurie (Katheryn Winnick, "The Art of the Steal"). She believes they are the result of losing his firefighting dad in a gas explosion, an idea presented by his psychiatrist and one which her boyfriend pushes in order to get Jake into a hospital and out of his way. But Jake recognizes the representatives as Taheens by the seams in their skins, escaping to an old home in Brooklyn that houses a portal to the alternate world where the Man in Black uses the minds of children to attack "The Dark Tower." Cowriter (with Akiva Goldsman, Jeff Pinkner and Anders Thomas Jensen)/director Nikolaj Arcel ("A Royal Affair") professes to have learned English because of his desire to read Stephen King novels which were not available in his native Danish. Something's been lost in translation with his adaptation. The film's main character is Jake, not the Gunslinger, which makes this movie feel like a forgettable twist on "The Last Action Hero." I have never read this King series other than some of the standalone short stories included in his collections. Those were enough to get a feel for King's character and atmosphere, neither of which I experienced in Arcel's film. Elba and McConaughey are generic representations of good and evil, Elba's loss of his father (Dennis Haysbert) at the Man in Black's hands giving him a catch phrase and shared experience with the boy whose powerful Shine would be capable of toppling the Tower. (The Dark Tower is located at the center of the Universe and keeps evil beings at bay.) With the exception of fast motion gun chamber filling and morphing creatures, effects are utterly uninspired. Some may enjoy looking for the various Stephen King story Easter eggs scattered throughout ("It," "1408," "The Shining," "Christine," "The Shawshank Redemption" and more). Locales in the alternate world offer little but scorched earth blandness with New York City offering opportunities for some Roland (the Gunslinger) fish-out-of-water fun. But the film's emphasis on Jake guts Roland's story which is what "The Dark Tower" should be all about. "The Dark Tower" isn't so much awful as generic and disposable. It leaves one wondering why it wasn't adapted into a series for television, where it might have had room to breathe, instead. Grade:

I tried reading the first of Stephen King’s The Dark Tower series back in 1982 but, at the time, it was not my literary cup of tea and I dropped it after a chapter or two. As such, I knew little of the “legend” and went into director and co-scribe Nikolaj Arcel’s imagining of King’s characters and places with few if any preconceived notions about the story. Here is what I figured out. Jake has a strong psychic gift that attracts the Man in Black, who wants to use the boy’s gift to destroy the Dark Tower, where the power of all the universes is centered. So, the MiB, also called the Sorcerer, searches for Jake to capture the boy and use his gift to complete the nefarious plan. Then, there is the Gunslinger, name Roland Deschain, who has his own vendetta against the Sorcerer and is out to stop his evil mission to rule over all the worlds. I know that The Dark Tower fans are going to rebel at how their epic novel series is represented by the film. To the filmmakers’ credit, “The Dark Tower” is being described as the sequel to the long-running book series and that is a plus for us the uninitiated. What I came out with is a sci-fi western about good versus evil with lots of shootouts and a lot of slick CGI. In other words, I was entertained.