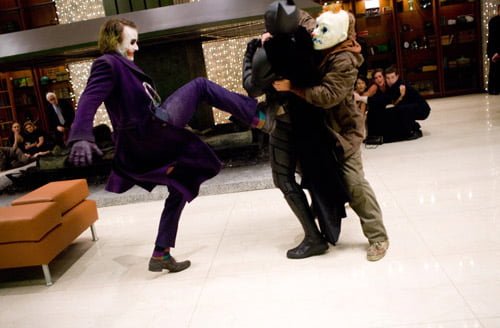 Law and order has been restored in Gotham City due to the dedicated efforts of the vigilante doppelganger of billionaire Bruce Wayne (Christian Bale) known as the Batman. But, a new menace appears in the city, a psychotic criminal mastermind by the name of the Joker (Heath Ledger), in the much anticipated return of “The Dark Night.”

A group of clown masked thugs break into a Gotham City bank. As various tasks are accomplished, they discuss their planner, The Joker, before one offs the now unneeded other. But The Joker (the late Heath Ledger, "Brokeback Mountain," "I'm Not There") is on site too, and he's far more dangerous than the mob whose money he's just stolen. Even the Batman (Christian Bale, "Batman Begins," "I'm Not There") needs a new hero for his City and new D.A. Harvey Dent (Aaron Eckhart, "Thank You for Smoking," "The Black Dahlia") is called a white knight until The Joker sets about proving that everyone is corruptible and the Batman becomes "The Dark Knight." Director Christopher Nolan, who cowrote this dense, dark story with brother Jonathan (whose short story was the basis for Nolan's "Memento"), has taken the comic book super hero movie onto another plateau with "The Dark Knight." This is the stuff of graphic novels, perhaps, but certainly not the 'BAM,' 'POW' of Adam West's Batman. Post 9/11 themes dominate here, from exploding buildings, the money trails of terrorists, televised hostages, policemen's funerals, the use of fear to breed chaos and Batman's invasion of the privacy of Gotham City's citizens 'for the good of all.' Even the marketing department gets into the act with a poster that immediately evokes the burning World Trade Center towers. Batman is up against his usual foes like the Scarecrow (Cillian Murphy, "Batman Begins," "The Wind That Shakes the Barley") and mob boss Salvatore Maroni (Eric Roberts, "National Security") when the Joker enters the picture. It's loyal butler Alfred (Michael Caine, "Batman Begins," "Flawless") who points out that Wayne is up against something new here - a man who's not out for money, but sheer villainy, an 'axis of evil' as it were. Wayne is also battling his divided feelings about Dent, who just happens to be the current squeeze of Bruce's love Rachel Dawes (Maggie Gyllenhaal, "Stranger Than Fiction," taking over the role from Katie Holmes). After Dent succeeds in arresting 549 criminals in one massive roundup, though, Wayne throws him a fundraiser, but the public forum calls The Joker out and Dent, Commissioner Loeb (Colin McFarlane, "Batman Begins") and the Mayor (Nestor Carbonell, TV's "Lost") are declared targets. Batman can only save so many, and seems forced to use Dent as bait only to end up as bait himself, saved by a most surprising rescuer. The Nolans brilliantly parallel this bit of reverse, double reverse for the film's dark ending, from which the movie gets its title. There's more than a bit of "Saw's" Jigsaw in this Joker, who delights in forcing people into killing to save themselves (he targets one public figure by stating he'll blow up a hospital if someone doesn't kill the guy in the next 60 minutes). The late Heath Ledger's performance is so organically twisted one both forgets whom one is watching and grieves his loss all over again. After "Brokeback" and now this, Ledger may have become an actor of Daniel Day Lewis stature. His face smeared with runny white, his scarred over grin slashed red, his eyes buried amidst black holes, his hair so stringy and greasy it looks almost green, Ledger scuttles about, his head atop his shoulders with no visible neck, speaking in a high, devil-may-care voice. With a knife in his hand, Ledger is so intimidating many may look away from the screen. Even when he's funny, he's creepy as hell, as when he dons a nurse's outfit to go 'incognito.' And there's a bit of "No Country for Old Men's" Chigurh in Harvey Dent, who makes decisions with the toss of a coin. Aaron Eckhart is fine as the crusading public servant, a trustworthy man turned to the dark side by tragic events (Nolan plays up duality throughout his film, but really sings with Dent's coin, and his face, a special effects marvel. Unfortunately Dent's leap from light to the shadows is too abruptly handled, the film's only flaw). The returning players are not overshadowed either, beginning with Bale's authoritative, masculine billionaire super hero, this time battling demons of a more external sort. Caine is a wonderful father figure, as is Freeman as Wayne Enterprise's Lucius Fox and Gary Oldman ("Sid and Nancy," "Batman Begins") is the picture of understated decency as Lt. promoted to Commissioner James Gordon, one of his best performances ever. It's fun to see Eric Roberts appear as 'Sally' Maroni, and he gives the character a rough-around-the-edges entitled elegance. In a small role, William Fichtner ("First Snow," TV's "Prison Break") makes a big impression as a brassy bank manager. Gyllenhaal brings more weight to the assistant D.A. role. The film looks great, Chicago once again standing in for Gotham. Wayne is now ensconced in a penthouse apartment, his manor having burned down in the prior film. When Batman travels to Hong Kong to drag back the mob's money launderer, panoramic shots of the city, including an iconic image of Batman standing at the edge of the roof of a high rise, sparkle like crystal (IMAX cameras were used for some of the shooting). New gadgetry introduced include metal bats which eject from the arm of the batsuit and the Batpod, a supercycle that ejects from the Batmobile, which Batman uses to truss up a truck and ride up a wall to make a turn. Fox is tickled with the challenge of how to return his charge to a commercial airliner in flight. With "Batman Begins" Nolan established a new kind of super hero movie. With "The Dark Knight" he's surpassed it. This is as thought-provoking a film as many made for the art house crowd that will still play to the masses.

I expected “The Dark Horse” to be a serious “Bad News Bears” with the troubled Genesis taking the ragtag young members of the Eastern Knights Chess Club and turning them into an unstoppable dynamo team that will take the big chess tournament, held in capital city Auckland, by storm. Well, there is some of that but, mainly, “The Dark Horse” is a solid character study by Cliff Curtis of a man and his coping with his bipolar disorder. His performance comes from within and he evokes empathy for Genesis. There is also a family story within “The Dark Horse.” When his brother Ariki (first time actor and real Maori gang member Wayne Hapi) takes him in, Genesis sees the chess playing potential in his nephew, Mana (James Rolleston), and brings him under his wing to teach him to play chess. Ariki, though, has other plans to initiate his son into his gang, the Vagrants. Genesis’ passion for chess and the Eastern Knights and hope to save Mana from a criminal life represent the troubled chess master’s road to redemption of mind and spirit. “The Dark Horse” is a showcase for Cliff Curtis and shows the actor can give a convincing, sincere and sympathetic lead performance. Wayne Hapi is impressive in his first time on camera and may have a new career. The rest of the cast, mainly the kids of the Eastern Knights, flesh out the background characters, often with humor.