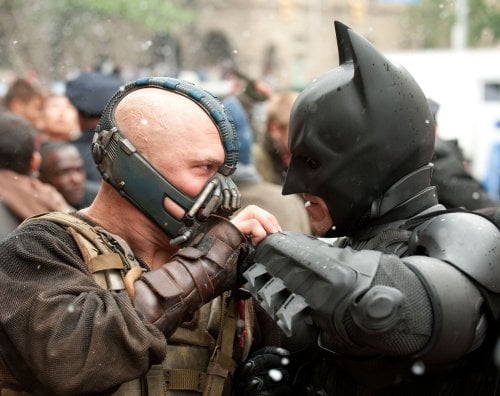 It has been eight years since the citizens of Gotham City turned on the Caped Crusader and made him an enemy for the crimes and murder of DA Harvey Dent. Commissioner Gordon (Gary Oldman) has committed to fighting crime in Batman’s absence but the city faces a new menace, a criminal mastermind called Bane (Tom Hardy) who plans to burn the metropolis to the ground. That is, until “The Dark Knight Rises.”

Eight years after Batman took the fall for Harvey Dent's crimes and death, the City of Gotham faces its ultimate threat - total annihilation. Bane (Tom Hardy, "Inception," "This Means War"), the new villain in town, has hijacked Wayne Enterprises' sustainable energy prototype, the pet project of board member Miranda Tate (Marion Cotillard, "Inception"), one of Gotham's biggest charity organizers. Meanwhile Bruce is shaken out of his seclusion by Selina Kyle (Anne Hathaway, "Love and Other Drugs") when he catches her stealing his mother's pearls - and his fingerprints - but she will also be his undoing when he goes after bigger threats in "The Dark Knight Rises." Cowriter (with brother Jonathan)/director Christopher Nolan wraps his ambitious trilogy with a satisfying if overstuffed conclusion. The film begins like a Bond film, ends much like "The Avengers" and has enough story crammed in the middle for about five ordinary films including "Escape from New York." Hans Zimmer's booming, brooding score gives the whole a feeling of 'great consequence,' but anyone hoping to see a Best Picture out of this should maybe reset their expectations - that should have happened with the previous one. Still, "Rises" wraps up a whole decade's worth of American political zeitgeist from 9/11 to the Occupy Movement and it's a whale of a tale. With Commissioner Gordon (Gary Oldman, "The Dark Knight") in the hospital recovering from a gun shot wound delivered in Bale's sewer lair (a rat vs. a bat?), Deputy Commissioner Foley (Matthew Modine, "Full Metal Jacket") is in charge with Gordon's newly promoted detective, John Blake (Joseph Gordon-Levitt, "Inception," "50/50"), acting as Gordon's eyes and ears on the ground. Gordon, who has been going through his own dark days, his justice based on lies, thrills watching Batman's return on a live news report, but Blake, riding with Foley, is astonished that the Deputy is more juiced about taking out Batman than the criminals. Bane has obviously been long in the planning stages, first faking the death of the only Russian nuclear physicist who can deactivate his weapon, then wiping out Wayne's fortune with an elaborate Wall Street stunt and, lastly, tricking the entire Gotham City police force underground before taking out the city's infrastructure, trapping them there and keeping all citizens on the island. Bane, a hulking ex-communicated member of the same League of Shadows that produced Batman, wears a menacing facial mask that alters his speech and recalls Ra's Al Ghul's gas mask. He claims his plan is all about giving Gotham City back to the people. The 1% are routed like the aristocracy during the French Revolution, prisoners are set free and kangaroo courts spring up (presided over by an old 'friend'). There's far more story than that, from Kyle/Catwoman's shifting sexuality and ties to Bane to corporate spies at Wayne Enterprises, Bruce's handing over the keys to his castle to Miranda for safekeeping and Alfred's (Michael Caine, "The Dark Knight") abandonment of his beloved boss. Batman himself is nearly crushed by Bane and is dumped into the same hellhole Bane emerged from, the only one to have ever accomplished that feat (hence the 'Rises'). Back when that first image of Hathaway as Catwoman emerged, it sent up red flags because, after all, she looked a bit dorky. Another bit of Nolan sleight of hand? Hathaway emerges as one of the film's biggest surprises, her first line of dialogue directed at Bale all full of sly, slippery smirk. Without Ledger (whose Joker character is never mentioned here) to overshadow him, Bale registers the strongest he has throughout the series as the conflicted orphan (there are at least three in this tale) turned symbol of hope and justice. Oldman is perhaps the series' MVP with Caine also terrific even with diminished screen time. Hardy is menacing, all physical presence accented with that processed voice. Cotillard fades as a romantic interest for Wayne in the face of the far more tantalizing Hathaway and Juno Temple ("Year One," "Kaboom") gets lots in the crowd as Kyle's lover? best friend? roommate? "Animal Kingdom's" Ben Mendelsohn is a solid sniveling creep as corporate rat Dagget and as his right hand man, Burn Gorman has a face ready made for a "Dick Tracy" villain. Scottish actor Tom Conti isn't seen on the big screen much these days, so it is a pleasure to recognize him under a layer of muck as Wayne's virtual 'trainer' in Bane's hell hole. It's unfortunate that "The Dark Knight Rises'" climax is so similar to that of "The Avengers" and its coda is sure to be debated, but Christopher Nolan has left us in the hands of the men the Batman always trusted most, one of them a man more like him than we'd guessed.

It has not even opened at theaters and, yet, there are dozens even hundreds of reviews out there with in-depth analysis and critique of “The Dark Knight Rises” and its declared-by-Christopher Nolan end of the lucrative franchise. (I do not think so.) Opinions are all over the place (though positive on Rotten Tomatoes) but none of them matter because reviews, bad or good, are not going to affect the millions of fans who have been impatiently waiting for their movie. So, I may as well toss in my opinion, too. The third entry in a trilogy franchise is an iffy proposition and its success depends on several factors. “The Dark Knight Rises” has a whole lot of factors that make this a worthwhile and satisfying conclusion to the successful series. Director and co-writer Chris Nolan (with brother Jonathan and David S. Gover) do not have the amazing bad guy they had in “The Dark Knight” with Heath Ledger’s Joker. But, the writing is right on target, the new bad guy, Bane (Tom Hardy, is evil, menacing and ruthless, and the copious action sequences – a combination of a cast of a thousand live action, stunts, life size weaponry models (I love The Bat) and expert computer generated effects - are all first quality. I will not go into the story because anybody that reads this really does not care what I, or other critics, think of it. The film starts of with a bang, using live stuntman effects to make the palms sweat and get the adrenalin flowing in preparation of the return of the Batman. The return is nicely handled and new, interesting characters, like Joseph Gordon-Levitt’s Officer John Blake, are seamlessly brought into the program. Acting is uniformly fine with Christian Bale doing yeoman work and Michael Caine giving his faithful manservant and friend Albert a melancholy and worried mood over Bruce Wayne’s decision to bring back his dark persona. Tom Hardy, as Bane, is somewhat hindered by his distracting pain-relieving mask but that does not diminish the fact that he is scary as hell. Gary Oldman really envelops his Commissioner Gordon and Anne Hathaway is terrific as the new and improved Catwoman. The production values are brilliant. Camera, costumes, sets, production design and the rest are superior and, with the roller coaster ride Nolan gives us, make the 164-minute film fly by. Not that anyone cares, but I like it.