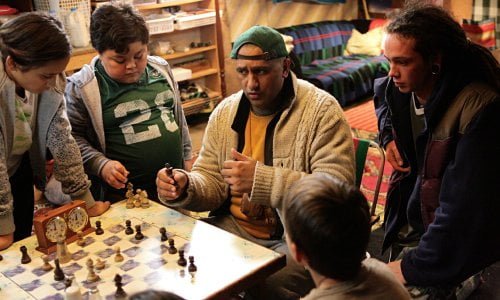 Genesis (Cliff Curtis) was a New Zealand chess champion and prodigy but that life was shattered long ago by mental illness. He spent much of his time in the hospital and is now released into the care of his biker gang brother Ariki (Wayne Hapi). A local chess club draws his attention and is the catalyst that may bring back the old Genesis in “The Dark Horse.”

I expected “The Dark Horse” to be a serious “Bad News Bears” with the troubled Genesis taking the ragtag young members of the Eastern Knights Chess Club and turning them into an unstoppable dynamo team that will take the big chess tournament, held in capital city Auckland, by storm. Well, there is some of that but, mainly, “The Dark Horse” is a solid character study by Cliff Curtis of a man and his coping with his bipolar disorder. His performance comes from within and he evokes empathy for Genesis. There is also a family story within “The Dark Horse.” When his brother Ariki (first time actor and real Maori gang member Wayne Hapi) takes him in, Genesis sees the chess playing potential in his nephew, Mana (James Rolleston), and brings him under his wing to teach him to play chess. Ariki, though, has other plans to initiate his son into his gang, the Vagrants. Genesis’ passion for chess and the Eastern Knights and hope to save Mana from a criminal life represent the troubled chess master’s road to redemption of mind and spirit. “The Dark Horse” is a showcase for Cliff Curtis and shows the actor can give a convincing, sincere and sympathetic lead performance. Wayne Hapi is impressive in his first time on camera and may have a new career. The rest of the cast, mainly the kids of the Eastern Knights, flesh out the background characters, often with humor.