The Dark and the Wicked 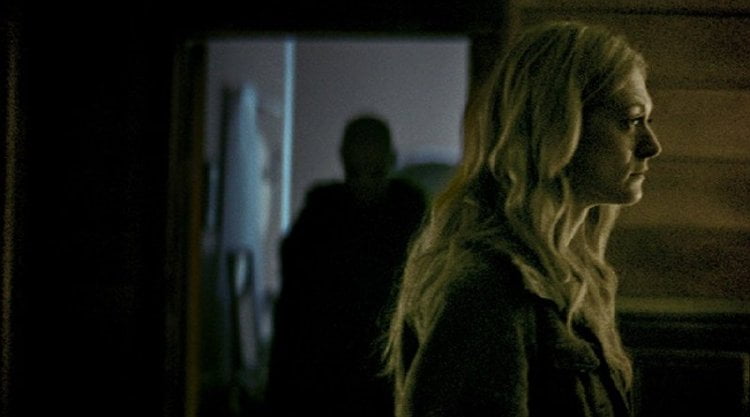 When Louise (Marin Ireland) returns to her parents’ Texas farm where her father (Michael Zagst) lies dying, she is surprised by the almost hostile way she’s received by her mother (Julie Oliver-Touchstone, AMC's 'Preacher'), who tells her she shouldn’t have come.  Louise’s brother Michael (Michael Abbott Jr., "Loving") is given the same reception and by the time the hired nurse (Lynn Andrews) tells them their mom’s been sitting by their dad’s bedside whispering to someone who isn’t there, they’ve deduced that their homestead is inhabited by “The Dark and the Wicked.”

Writer/director Bryan Bertino evinced his cinematic ability to create an unseen presence with "The Strangers,” then folded more emotional notes into his work with his last, “The Monster.”  His latest features the best of both in an unsettling tale about the horrors of caring for a dying loved one, a theme explored earlier this year with “Relic.”  I’d go so far as to say Bertino’s is the better film, its explorations going farther into such issues as sibling guilt over the imbalance of burden sharing, if it were not for his literal last second indulgence in a jump scare which undermines his theme of the bravery called upon by love.

In a barn which alternately appears to hold goats, commonly affiliated with the demonic and/or sacrifice, or sheep, like God’s flock, a manual ‘alarm’ of noise makers is strung across its entrance.  Of course it goes off as mother wanders through her animals but there is nothing to be seen.  Something similar will happen the first night Louise is there.  Having stayed downstairs to wash up, she first closes the front door.  It opens – widely – and only we see a shadow figure in a doorway as she passes to close it again.

Things get even eerier when Michael arrives.  Their mother is hounded by evil spirits (and back in that barn we see animals jump over an unseen barrier) and Louise gets an unexpected and horrific visit as she showers.  Michael finds their mother’s diary which reveals what she believes is happening.  A strange Priest (Xander Berkeley) taunts.  Michael frets about his wife and daughters back home.  The granddaughter (Ella Ballentine, "The Monster") of neighbor Charlie (Tom Nowicki) arrives with dreadful news and a case of possession.

Bertino establishes a sense of dread early and continues to build tension.  Tristan Nyby’s probing cinematography keeps our eyes darting about the frame and peering into shadows.  Sound expresses both the hushed sensation of something there we cannot see and the chilling howls of wolves in the night.  In the film’s creepiest scene, Michael is greeted by a mutilated goat running past minus a limb.  What he and Louise find in a field is a Boschian Biblical scene.

“The Dark and the Wicked” is a slow burn rumination on the lingering death of an aged loved one and the fortitude required of the caregiver.  Bertino ups the ante with a genuinely rattling battle for a soul, but he’s stacked his deck too highly against his own protagonist.