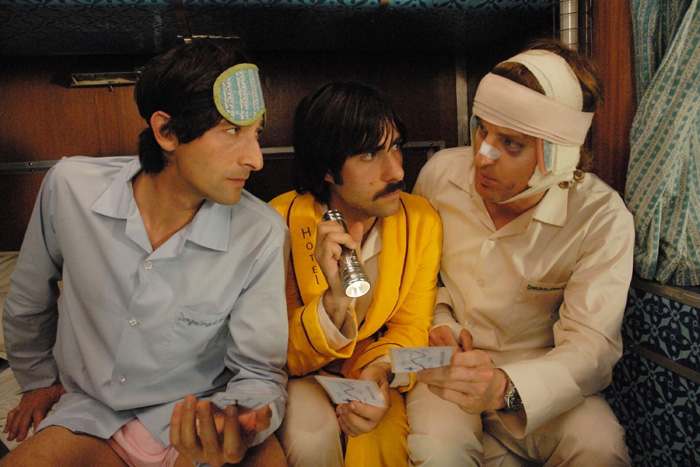 Three brothers – Francis (Owen Wilson), Peter (Adrien Brody) and Jack (Jason Schwartzman) – have been estranged from each other for a year, after their father’s funeral. When they reunite, Francis proposes a “spiritual quest” through India to reform the filial bond they once had. But, their journey of rediscovery takes an unexpected turn when they dose themselves with pain killers and Indian cough syrup and smuggle a deadly pet cobra on board “The Darjeeling Limited.”

Filmmaker Wes Anderson’s career has steadily risen since his debut comedy, “Bottle Rocket (1996), which introduced us to the Wilson brothers, Luke and Owen. Since then, he has brought us the marvelous “Rushmore (1998),” debuting Jason Schwartzman, and the funky black comedy, “The Royal Tenenbaums (2001).” He stumbled, badly in my mind, with “The Life Aquatic with Steve Zissou,” a comedy that was not. He springs back, somewhat, with “The Darjeeling Limited.” The brothers Whitman hook up, after their self-imposed separation, in India where domineering Francis proposes the journey that will, he says, will rekindle their brotherhood. All they have to do is three things to make this happen: take a spiritual journey; say yes to everything; and, be brothers again. Peter and Jack reluctantly agree to go along with the plan and they set out, on the titular train, to find themselves. Francis, the eldest, is used to giving orders to and making decision for his brothers and he persists even now, ordering their dinner, directing who sleeps where in their shared compartment and demanding their passports (just in case they change their minds). It looks like things are going to revert to the way they were before their estrangement but things have changed. The three have a lot more baggage than their 11 suitcases, laminating machine and printer, including a “fondness” for prescription painkillers and over-the-counter Indian cough syrup. On one stop, under the influence of the narcotics, Peter insists that he buy a cobra, as a pet, and bring it aboard The Limited. This decision will have dire consequence on their planned-to-the-minute (by Francis’s assistant Brendan (Wallace Wolodarsky)) itinerary when the Chief Steward (Waris Ahluwalia) discovers the poisonous snake, seizes it and tosses the trio off of his train. This unfortunate incident also breaks up a budding romance between Jack and train stewardess Rita (Amara Karan). Once evicted from the train, the brothers, and all their metaphorical and physical baggage, must make their way to their final destination. Peter and Jack do not know it, but their brother has plans for them to visit their mother, Patricia (Angelica Huston), who has cloistered herself as a nun in a Himalayan convent. The spiritual journey becomes a quest to reunite the Whitman family. Anderson balances, a little unevenly, his story that goes from whimsy to seriousness and back as he joins the three brothers and their now very different lives on their quest. Filial politics, bickering, romance and cough syrup abuse are counter pointed by a harrowing incident where they see a terrible river accident and risk their lives to save three boys from drowning. This rescue-turned-tragedy is sobering and, for a time, a serious detour from the “The Darjeeling Limited’s” whimsical path. The director and co-writer (with Roman Coppola and Jason Schwartzman) has some deep thoughts going on in his head that are translated to the screen. Those used to his funky, offbeat humor may be taken aback by the Limited’s” serious turn but it makes it a more thoughtful film than we are used to. This is an old-home-week film that brings together many of those who worked on Anderson’s previous movies, including Bill Murray in an amusing opening cameo. As such, the cast and crew are relaxed in depicting the exotic journey of the Whitman boys.