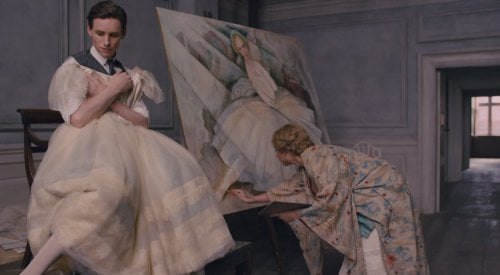 Einar Wegener's (Eddie Redmayne, "The Theory of Everything") landscape paintings have begun to make him famous in 1926 Copenhagen while his wife Gerda (Alicia Vikander, "Ex Machina") toils over underappreciated portraits. When her ballet dancer friend Ulla Paulson (Amber Heard, "Pineapple Express") isn't available to pose, Gerda asks her husband to don stockings and slippers to complete her work and it opens something up in Einar. Soon the two are giggling over pranking an artists' ball by having Einar attend as his own cousin Lili, but although Gerda's new subject finally gets notice for her work, she is set for heartbreak when she realizes Einar prefers life as "The Danish Girl."

Working with screenwriter Lucinda Coxon ("Wild Target") adaptation David Ebershoff's novel, director Tom Hooper ("The King's Speech") has lucked into the zeitgeist with this story of one of the pioneers of gender reassignment surgery. "The Danish Girl" is a love story, but so muted is Redmayne's otherwise convincing performance, it's a pretty one sided one, Vikander the sole source of the film's emotional current. With his third film, Hooper's direction has matured, his confounding use of wide angle lenses constrained to one somewhat logical choice here, but his penchant for backgrounding his subjects with moldering walls remains intact. The young artistic couple we meet is mutually supportive, Einar expressing a desire for his wife to return bed, their friend Ulla teasing for news of pregnancy. After Einar flirts with satin slippers and tutus, Gerda discovers he's wearing her satin nightgown under his suit and begins to indulge him, making him up, drawing his portrait as he sleeps. Her portraits of Lili find favor with art gallery owner Rasmussen (Adrian Schiller, "Bright Star") who sends her to Paris. But the kiss she saw Lili receive from Henrik (Ben Whishaw, "Spectre"), who Lili continues to see, haunts her and so she looks up the childhood friend, Hans Axgil (Matthias Schoenaerts, "Far from the Madding Crowd"), whose playful kiss with an aproned Einar once upset her father-in-law. Hans keeps an open mind as he meets Lili, but he clearly has his mind on Gerda. Although Gerda desperately desires the return of her husband, she stands by Lili through the horrors of archaic psychiatric diagnoses. Finally the two meet Warnekros (Sebastian Koch, "Bridge of Spies"), the foreward thinking surgeon who recognizes the reality of transgender people. Redmayne, who makes a stunning woman with his fair skin, beautiful cheekbones, full lips and luminous eyes, believably transitions from Einar to Lili before our eyes, but the actor and his director express no remorse for the loving marriage left behind. Redmayne's Lili is a shy and quiet creature who seems to revel more in feminine fabrics than altered relationships. Vikander is the spark here, a woman whose love soldiers on as she mourns a loss still present. The period production has a watercolor prettiness - Hooper catches racks of ballet tulles like Degas. Costuming and makeup, of paramount importance here, illuminate the characters. But the story, like Lili, is too languid. There is more fire in a final scene symbolizing the Einar/Lili who has been lost than the ones that had them present. Grade: