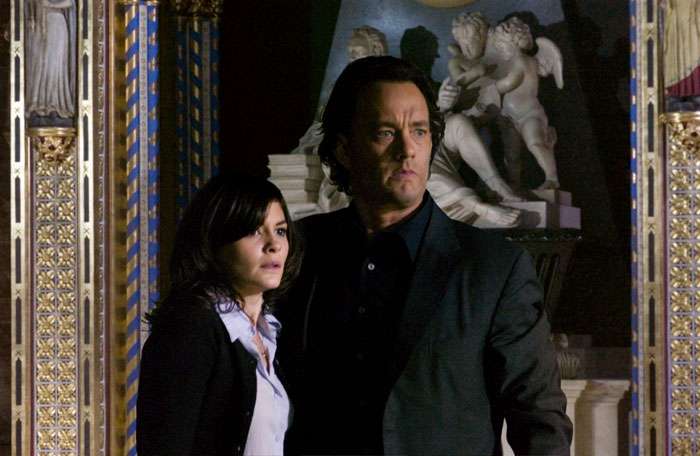 Cryptologist Robert Langdon (Tom Hanks) arrives in Paris to deliver a speech and promote his new book but instead gets sucked into a centuries old war between the Catholic Church and the Priory of Scion when Louvre curator Jacques Sauniere (Jean-Pierre Marielle, "Tous les Matins du Monde," "La Petite Lili") is murdered and he becomes the prime suspect in director Ron Howard's ("A Beautiful Mind," "Cinderella Man") movie version of "The Da Vinci Code."

How dark the con of Ron. "The Da Vinci Code" plays sort of like "National Treasure" with any sense of fun sucked out of it. Even Paul Bettany's ("Wimbledon," "Firewall") career low performance as the albino killer monk, Silas, becomes quickly tedious rather than unwittingly entertaining. When he's called to the murder scene by Captain Fache (Jean Reno, "Hotel Rwanda," "The Pink Panther"), Langdon does not see the trap about to snap, but he's pulled from danger by Sophie Neveu (Audrey Tautou, "Amelie"), a police decoder and the dead man's estranged granddaughter. As Sauniere used his dying moments to leave multiple clues, both on his body and scattered about the museum, the duo begin their adventure before they even begin to run. A key leads them to a Swiss bank where another piece of the puzzle is lodged and having identified their quest as being for the Holy Grail itself, they head to the Batman-like manse of Robert's eccentric friend Sir Leigh Teabing (Ian McKellen, "X2," "The Lord of the Rings"), who has dedicated his life to the subject. Teabing fills in historical gaps and comes to the conclusion that Sophie is now the only remaining protector of the Grail, which, we learn, is not a cup but a woman, Mary Magdalene, the wife of Jesus Christ and mother of his child. Teabing points to Da Vinci's "Last Supper" as proof, where, he says, the woman hides in plain sight. Howard and screenwriter Akiva Goldsman ("A Beautiful Mind," "Cinderella Man") are so slavishly faithful to the Dan Brown book that they expose it for what it is - puffy stuff for conspiracy theory buffs thrown on top of a conventional outline. As in the book, the lead characters have no chemistry. Hanks is OK as Langdon - I even like the much dissed haircut on him - but the few stumbling attempts to relay the character's claustrophobia are unconvincing throwaways that do nothing for development. With the exception of the delightfully cracked performance by Ian McKellen (and even he loses his charm when he turns coat), "The Da Vinci Code" is a prime example of how to miscast actors and waste their talents. The pixyish Audrey Tautou here comes across as pinched. The great Jean Reno (see "The Professional") seems sedated and Alfred Molina's ("Spider-Man 2") Bishop Aringarosa seems to have stepped out of "Nuns on the Run." Speaking of which, why did no one think to cast Robbie Coltrane as the mad monk? Bettany, whose first line delivery recalls none other than "The Princess Bride's" Inigo Montoya, is saddled with a distracting (and inaccurate - albino eyes are pink) set of contacts and several over-fetishized scenes of self-flagellation. Jürgen Prochnow ("Das Boot") fares better as duplicitous bank manager André Vernet and Marie-Françoise Audollent ("In Praise of Love") is noteworthy as suspicious Sister Sandrine. The film has received a lot of press for its access to the Louvre, but cinematographer Salvatore Totino, who so effectively shot Howard's "The Missing" and "Cinderella Man," bathes everything, with the exception of Sauniere's genitals which are so brightly lit as to obscure them, in murk. Desaturated historical sequences, reminiscent of a similar device in Coppola's "Dracula," are nicely melded into the film (editing by Daniel P. Hanley and Mike Hill). Hans Zimmer ("Batman Begins," "The Weather Man") has concocted a simple yet effective motif as the film's aural signature, but it's pushed too far to the forefront, knocking on our foreheads rather than settling into our consciousness. I was never a fan of the book (I started screaming 'hooey' when Newton's apple was thrown into the celestial mix), so I suspect there are plenty of readers who will be quite satisfied with this movie. "The Da Vinci Code" isn't awful, it's just overly long, too self serious and ends on a very flat note. As for all the ruckus from the Catholic Church - haven't they ever heard of fiction?