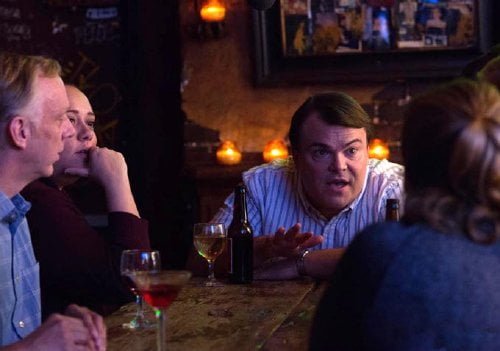 Dan Landsman was not at all popular as a student at Grant Barklidge High School. Now, 20 years later, he is the self-appointed head of the class reunion committee and is still not cool. When he sees a Banana Boat commercial, he recognizes the actor, Oliver Lawless (James Marsden), the guy who was the coolest dude in Dan’s graduating class. This inspires him to weave a web of lies to get Oliver to attend the reunion at his side, hoping some of that cool will finally rub off on him in “The D Train.”

Dan Landsman (Jack Black, "Bernie") takes his role as the self-appointed chairman of his Pittsburgh high school's alumni committee very seriously even if the other members ditch him for post-meeting drinks. With a low response rate for their 20th reunion, Dan finds his road to success and popularity when he spies former drama student Oliver Lawless (James Marsden, "The Best of Me") pitching Banana Boat on a late night TV spot. Dan pulls out all the stops, convincing boss Bill Shurmur (Jeffrey Tambor, TV's 'Arrested Development') he's got a big fish to land in L.A. and begins dreaming of finally having a cool nickname like "The D Train." Why does it seem that when screenwriters first jump into directing it seems to be the writing that suffers? "Yes Man" scribes Andrew Mogel & Jarrad Paul's attempt to inject new and edgy life into the high school reunion movie suffers from one implausibility after another, their demands on faith from their audience returned with pious fraud. Yet somehow their appealing cast almost manages to turn water into wine with engaging performances that keep the ride on "The D Train," if not quite worth taking at least comfortable for those who've boarded. Dan's so wrapped up in his own myth making, he believes nondisclosure of the password to the reunion Facebook page he's created gives him power. He holds sway over his technophobic boss at Shurmur Consulting with everyday knowledge (how this company could still be in business is one of the 'truths' we must swallow). He has no friends, but he's loved by his pretty high school sweetheart Stacey (Kathryn Hahn, "This Is Where I Leave You," Showtime's 'Happyish'), who, later on, inexplicably seems to retain the same high school friendships which elude him. Dan's delusional quest meets its first obstacle when Bill informs him he'll be accompanying him to he West Coast for his nonexistent meeting. Powering forward, the two land in L.A. where the obsequious Dan calls Oliver and persuades him to meet for a drink. While it's readily apparent to us that the Banana Boat pitchman is anything but successful, Oliver feeds into Dan's idea of him, pretending to know Dermot Mulroney and partying all night (he also 'acts' the part of Dan's business score, agreeing to Bill's deal to further Dan's ill-advised plans). Then the film's 'big idea' comes into play and it's only believable as an expression of power and even that's stretching it. Despite Dan's horror at what's transpired, once Oliver's in Pittsburgh for the big event, he hangs onto their indiscretion like a jilted lover, driving everyone, including his son Zach (Russell Posner, "Fading Gigolo"), away. Mogel and Paul are obviously trying to send a message that being oneself is the best way to be, but trying to sell their climactic humiliation of their protagonist as a revitalization is as ill conceived as the events which precede it. While the underrated Marsden is hilarious advising Zach on how to handle a three-way, we first have to buy that a geeky fourteen year-old would not only be considered 'hot' by the sixteen year-old Heather (Danielle Greenup), but that she'd want to include another in their first sexual encounter. The whole movie's riddled with this type of nonsense. Marsden and Black are fun together as interdependent delusional enablers, Marsden the irresponsible hedonist coasting on his looks, Black somehow creating a quick-witted dimwit unabashedly flaunting his dumpy physique. The film's single funniest bit is a quick cutaway to Tambor, seen from his hotel room TV's POV eating a room service dinner. Tambor is a treasure and his trusting, behind-the-times Bill is endearing. Comedienne Hahn plays it straight, the supportive wife, engendering sympathy. As the most prominent of Dan's committee members, Mike White (HBO's 'Enlightened'), Kyle Bornheimer ("Camp X-Ray") and Henry Zebrowski ("The Wolf of Wall Street") are those three guys everyone seems to know from high school. The movie's soundtrack echoes Dan's high school years with such selections as The Vapors' 'Turning Japanese' and Foreigner's 'I Want to Know What Love Is.' Grade: