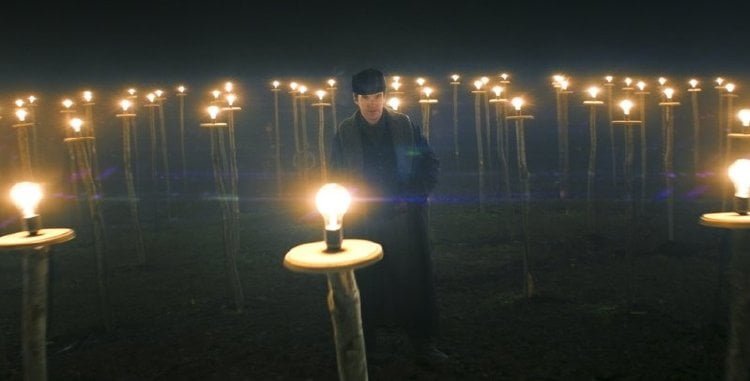 In the winter of 1880, a group of rich New Yorkers arrived in a field in Menlo Park, New Jersey to witness it set aglow with hundreds of light bulbs by inventor Thomas Edison (Benedict Cumberbatch, channeling a young Harrison Ford). But Edison snubs a set meeting with industrialist George Westinghouse (Michael Shannon), setting the man off on a rival path, ironically with Edison’s undervalued former employee Nikola Tesla (Nicholas Hoult). The film which received a lukewarm reception at the 2018 Toronto International Film Festival has been reworked, now issued as “The Current War: Director’s Cut.”

Having not seen the original cut of the film when it was being distributed by The Weinstein Company, I have no comparison to offer but was pleasantly surprised with the stylish distinctiveness director Alfonso Gomez-Rejon ("Me and Earl and the Dying Girl") brings to screenwriter Michael Mitnick’s ("The Giver") tale of three men vying to establish a standard to build our future upon. The film does have flaws, failing to get into the basic differences between Edison’s preferred direct current (DC) with Westinghouse and Tesla’s chosen alternating current (AC) in addition to lopsided characterizations of its three principals, but overall it is often dazzling, its lightning pace matched with inventive visuals (cinematographer Chung-hoon Chung, 2016's "The Handmaiden"), sound design and a score (by "The Art of Racing in the Rain's" Volker Bertelmann and Dustin O'Halloran) fueled by morse code, metronomes and electronica.

Mitnick, who began developing his script as a Yale college assignment, balances light and dark throughout. Attempting to find funding, Edison is invited to President Chester A. Arthur’s White House along with financier J.P. Morgan (Matthew Macfadyen), where he demonstrates his phonograph, but Arthur is interested in weapons innovation. Edison declares he will never invent anything that will take a man’s life.

But when Westinghouse, using a competitor’s ripoff of Edison’s own lightbulb, begins to win far more city contracts across the country because his grid is capable of much farther distances at a much lower cost, Edison decides to smear the man by planting stories that AC electricity is lethal. He does this by electrocuting, or ‘Westinghousing,’ a horse for the press, then secretly consults on the design of the first electric chair which will also bear his competitor’s name.

The two men amp up their game when the Chicago World’s Fair invites bids for its City of Light and when Westinghouse’s good friend and chief engineer Franklin Pope (Stanley Townsend) is killed in an electrical accident, Edison’s claims seem to have merit. But Westinghouse gets a hold of the consultancy letters Edison believed had been destroyed, revealing the inventor’s hypocrisy. The industrialist wins the contract, but doesn’t retain the fame as Edison moves onto his next endeavor – the motion picture.

Westinghouse comes across as the far more altruistic man here, willing to partner for the benefit of all versus Edison’s desire to control his ‘geniuis’ legacy. Both men’s marriages are crucial to their success, although different in nature. Mary Edison (Tuppence Middleton, "Downton Abbey") worked for her husband before marrying him, yet despite his avowed devotion to her, finds herself begging him to spend time with herself and their children Dash (Woody Norman) and Dot (Sophia Ally). She would die tragically at 29 of a brain tumor (just as Gomez-Rejon introduces William Kemmler (Conor MacNeill), the man who murdered his wife with an axe and would become the first to be executed in the electric chair Edison helped design with disastrous results). Marguerite Westinghouse (Katherine Waterston) is presented as more of a partner to her husband, the two enjoying an easy, affectionate camaraderie, Shannon and Waterston well matched. In fact, Edison spends a lot more time with his secretary, Samuel Insull (Tom Holland), than his family (and while Insull is presented as Edison’s Jiminy Cricket, we never get a real sense of why his loyalty was earned nor how working for such a hard-driving taskmaster was ‘fun’). Lost a bit amidst all the dramatic detail is Tesla, Hoult’s performance earnest and accented and too even-keeled given his treatment. He does get some late breaking focus as his vision to use Niagra Falls to power the eastern seaboard comes to fruition.

Visually, there is an elephant in the room, the mammals seen frequently, yet never specifically mentioned (the film does not extend to 1903, when Edison infamously electrocuted Topsy). Gomez-Rejon frequently employs Muybridge strips depicting all number of animals Edison would sacrifice, eventually leading up to a (dead) man, walking. The filmmaker is also enamored of dutch angles, overhead shots and odd perspectives which, combined with the breakneck editing, can verge on sensory overload (showing the hand, perhaps, of producer Timur Bekmambetov?). The large U.S. map in Edison’s lab designating cities lighting up across the country is a good grounding device.

“The Current War: Director’s Cut” has the elements which could have made for a great film. As it is, it’s a high wire act with wobbles.