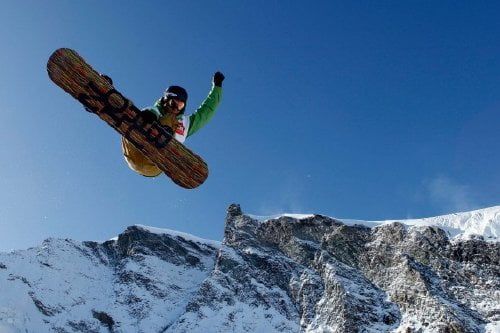 Kevin Pearce and Shaun White have been friends and competitors in the dangerous snowboard event called the half-pipe. They have been world ranked, alternately, number one and two in their dangerous sport. With only weeks before they are to compete at the Vancouver Winter Olympics, tragedy strikes and Pearce is severely injured during a practice session at Park City, Utah. Lucy Walker brings us into the lives, past and present, of these young athletes with “The Crash Reel.”

U.S. Snowboarding Olympic hopeful Kevin Pearce was doing the impossible - beating Shaun White, a competitor compared to a computer set to 'expert.' But on New Year's Eve, 51 days before the 2010 Vancouver Winter Games, Pearce landed on his face coming down from a jump on his first run, resulting in a traumatic brain injury (TBI). His struggle back is documented in cowriter (with her "Waste Land" editor Pedro Kos)/director Lucy Walker's "The Crash Reel." I knew nothing going into this documentary other than it was about snowboarding. Early footage highlights the jaw-dropping feats of athletes who are required to be daredevils in order to excel. But even after Walker shows us Pearce's accident early in her film, the film was quite a ways in before I realized it wasn't about snowboarding so much as TBI, the sports which result in this type of injury and the myriad obstacles those who survive it must work through. The most surprising aspect of "The Crash Reel" is that Walker has structured her film so well (editor Kos propels the story forward at a compelling clip) that the medical and psychological aspects of TBI end up being every bit as enthralling as the feats which cause them. Pearce is a great subject - good looking, humble, surrounded by a loyal pack of friends (or Frends as they brand themselves, as there should be no 'I' in friends). He's got a pretty girlfriend who's also in the sport. His family, which includes three older brothers, one of whom, David, has Down Syndrome and is a Special Olympics medalist, is tight knit (it didn't register until late in the film that dad, Simon Pearce, is *the* Simon Pearce, a famous glass blower whose business is a major Vermont tourist attraction). Walker and Kos expand upon this by back tracking after punching us with his devastating fall. We see the little boy who followed his brothers only to surpass them. We learn about the completely different paths taken by him and White, the latter achieving fame early, the former slowly building. We see Pearce towing the healthy line as his snowboarding buds Danny Davis, Mason Aguirre and Jack and Luke Mitrani party (in one amusing montage, they break holes in the wall of their group home snowboarding down stairs). But Pearce shares his good fortunes, like a Nike financed tube, whereas Shaun White even makes his girlfriend sign non-disclosure agreements about his training. When Pearce beats White at an important Japanese event in 2007, the former unbeatable champ's extremely unsportsmanlike behavior causes a rift, as well as further incentive to beat him. So far, this is a great sports rivalry doc. But then we've caught up to 12/31/09 and get more details on the accident, some of which are pretty grisly. Family and friends pull together in grief, waiting for Kevin to come out of his coma, show some sign of life. The recovery process is grueling. Older brother Adam quits his job to help his brother rehabilitate. Kevin suffers from double vision, memory loss, balance issues and seizures. His personality has lost its filter, making him seem negative and hostile when he has no such intent. And at every moment, Kevin's talking about returning to his sport. He calls his family's unwillingness to support this a betrayal, sending Walker down yet another path in this complex sports tale. "The Crash Reel" is compelling, dynamic story telling with an advocacy undercurrent. Walker never preaches, she and Kos just lay out an incredible journey with a few supportive side trips to build her case against extreme sports while still celebrating the athletes who participate in them. Opening and closing credits roll against beautiful images of snowboarding at night, and yet what we take away most is the difference in the beautiful young snowboarder who may never be the same again.

The film begins with Kevin Pearce and his snowboarding buddies heading off the Park City, Utah, to prepare and practice for the 2010 Winter Olympics. We are shown Pearce’s life in family video flash backs that demonstrate his passion for his sport from an early age. We see his victories and meet his fiercest competitor, and friend, Shaun White. The two travel from on snowboard open to another, crossing the world and almost always ending up as the top two players in their field. The film takes a terrible turn when Pearce, always pushing the edge of the envelop, makes an error on a practice jump and land face first on the frigid, icy half-pipe after dropping 40 feet. He is airlifted to a hospital and declared in critical condition. Now, the film turns again and we spend the next two years of his life following Pearce’s grueling therapy toward recovery. From early on, though, Kevin declares his intention to return to competitive sport – much to the chagrin of his family, especially younger brother David who suffers from Downs Syndrome. As we watch Kevin’s painful recovery, filmmaker Lucy Walker continues with the stellar career of Shaun White. Pearce’s accident has a near traumatic effect on White as he has to get the images of his friend’s career-ending accident out of his head. Being the athlete he is, Shaun went to Vancouver and came home with the gold. Walker also includes a short coda about Sarah Burke, a champion skier who also had an accident at the Park City half-pipe that ended in her death. Lucy Walker makes a multi-faceted documentary that deals with the demands on Olympic-level athletes to excel at their chosen sport. She also shows the impact, the thrills and sorrows of the Pearce family as they cope with their badly damaged Kevin and agonizing over his desire to return to the sport that nearly killed him. That desire is nicely covered as Walker’s camera follows Pearce through his rehabilitation and his plans to compete again, despite the warnings by doctors and fears of his family that another head injury could kill him. Walker brings to light the hard struggle that TBI (Traumatic Brain Injury) victims must face to regain a semblance of normal life. Be warned: the images of many snowboard accidents and their aftermath, shown in a montage, are tough watching and may cause you to turn away. I did.